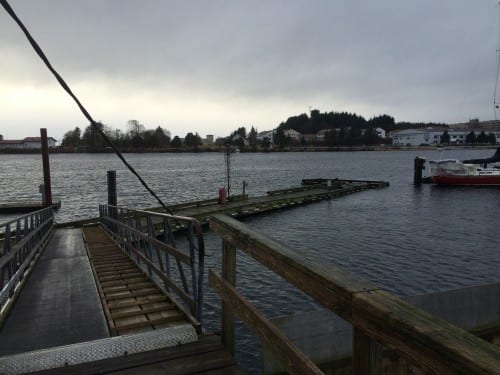 After the piling broke, the main dock began to drift out into Sitka Sound. (Photo courtesy of Stan Eliason)

During their regular meeting Tuesday (5-24-16), the Assembly authorized funding to repair Sitka’s public seaplane dock, which was condemned this winter after one the pilings crumbled. The repair will cost $170,000 and will be completed by local contractor, WS Construction.

A new seaplane dock has been proposed on the north end of Japonski Island, but Kevin Knox, Chair of the Port and Harbors Commission, said pilots need a place to park in the meantime. So, he’d like to extend the life of the current dock. “If we can get the five years out of this old facility that we would really need before a new facility comes online, that would really be imperative,” Knox said.

The Assembly also voted to require geotechnical analysis for property development in landslide risk zones. Sitka didn’t have this level of detail in their building code before. See the updated section here: Memo and Ord 2016-19

Public Works Director Michael Harmon said the new language is meant to hold developers accountable when building in known landslide zone. The developer would have to pay for the analysis, which could range from $5000 and $15,000.

Harmon explained, “The funding is not to be borne by the citizens of Sitka. It’s borne by the applicant all the way through. The diligence is upon them to prove that it’s safe. Developers are usually going to be selling those home to our citizens and our community.”

In persons to be heard, Alexander Allison shared his concerns about excessive force within the Sitka Police Department and accused the Assembly of not addressing the issue head on. In October, Allison leaked a video of Franklin Hoogendorn, a Mt. Edgecumbe student, being held and tased in a Sitka jail, generating public outcry.

In the wake of the video, Allison felt the city had not done enough (beyond a town hall meeting) to change police operating procedure. He called upon the Assembly to amend those practices by open committee. “I love my community and the families and students whom I serve. I know that most of you feel the same. You should think hard on the example you’ve set thus far in this case, by not setting any example at all,” Allison said.

Before adjourning, the Assembly met in executive session. Chief Administrative Financial Officer Jay Sweeney gave them a status update on two loans to the Baranof Island Brewing Company, a local brewery, from the Southeast Alaska Economic Development Revolving Loan Fund. Commonly known as the Stevens Fund, the fund was created in 1997 by Senator Ted Stevens to diversify local Southeast economies.

Awarded between 2011 and 2014, the loans to BIBCO total nearly $700,000. Both the city and BIBCO owner Suzan Hess declined to comment on the status of the loans.