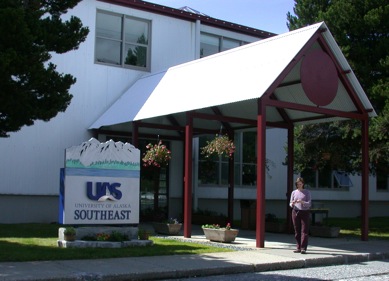 The University of Alaska Southeast (UAS) campus will be losing its cooperative extension office this October. Photo provided by UAS.

The cooperative extension at University of Alaska Southeast is closing its doors. The news broke after state budget reductions forced the University of Alaska to cut nearly one million dollars from the program, which provides agricultural, health, and community development training . Of the twelve cooperative extension offices in the state, only the Sitka and Anchorage offices are set to close.

Marmian Grimes, spokesperson for the University of Alaska Fairbanks, says that a team of faculty and staff were working for over six months to reorganize the extension program in the face of budget cuts. Several proposals were considered.

Grimes –  One proposal back in the beginning of April that would have kept three main offices, downsized a few more, then closed several other offices across the state. Sitka, Nome, and Bethel were three of those proposed for closure…Since that initial proposal was on the table, the budget situation worsened. That’s sort of how we got to the proposal that was approved.

Rent alone for the Anchorage office was $250,000 per year. The total budget reduction from closing the Sitka office is a little over $45,000. Grimes says that cost wasn’t the only factor in determining which offices would close.

Grimes – Sitka used to have one agent and one administrative person. At some point in the last few years the agent retired…we just have not been able to get the funding to replace that vacant position. So it’s maybe been a longer process…for the budget to really take its toll on that office.

Extension offices across the state are beginning to provide more services and courses online, and the university does have a plan to continue providing services to Sitkans.

Grimes – Already the Juneau district office has been providing services in Sitka. Earlier in May the Juneau agent and someone based in Fairbanks offered a community food preserver training. We intend for that service to be continued, even without an office in Sitka.

The Anchorage and Sitka offices are slated to close by the end of October. Both offices employee 13 people total, and the university has not confirmed what layoffs or transfers will occur as a result of the closures. Grimes says Sitkans can redirect their agricultural questions to the Juneau cooperative extension office. That number is 907-523-3280