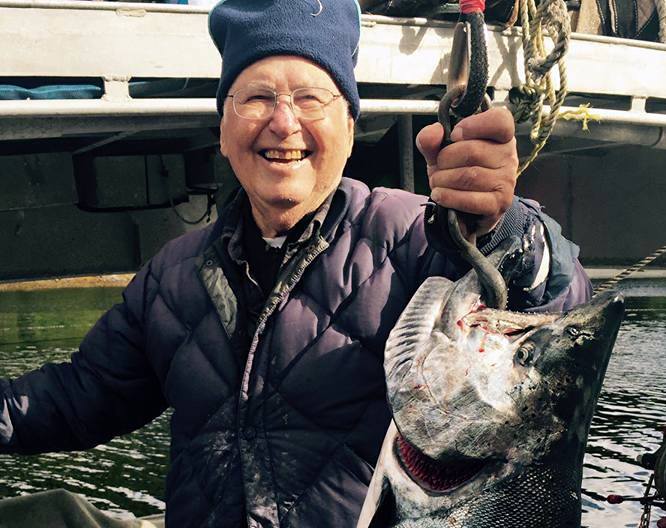 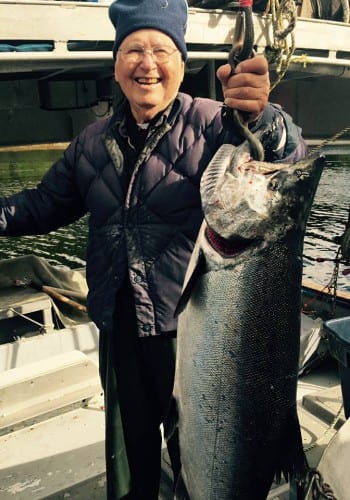 How will Bob Bernhardt spend his long-awaited derby winnings? “Any way I damn well please!” he said. (Sarah and Eric Jordan photo)

The winner of the 61st Sitka Salmon Derby has waited a long time for his fish. Bob Bernhardt has been trying for the top king salmon in the event since his brother Ernie beat him 57 years ago.

Bob Bernhardt turns 87 next month. When I finally tracked him down on the telephone he was at the Nugget having a victory lunch with his daughter, Roberta White, who — go figure! — has also won the Sitka Salmon Derby.

It turns out that Bob, who has put in more time than any other member of his family in this contest, is the only one who hasn’t won it — until now.

According to Roberta, her dad is still on Cloud Nine over this beautiful turn of events, and too emotional to speak to media.

His son Gary though, was willing to backfill some of the details of the catch. It went something like this, he says.

They tried Kalinin Bay early in the day on Saturday, but left when they got no fish. They still had nothing in the boat when they came back to Kalinin at about 2:30 PM. That’s when Bob hooked the king.

Gary says the fish was lazy, though they knew it was big when it got close to the boat and flashed. Once it was netted and on the deck, Bob knew it was bigger than the 36-pounder that was leading the derby.

They took it right away to the derby weigh station Eric and Sarah Jordan operate in Kalinin Bay on their troller “I Gotta.” It came in at 40.5 pounds.

The fishing action picked up again, and Bob managed to catch his limit in pretty big fish. Or make that real big fish, because it appears Bob — possibly for the first time in Sitka Salmon Derby history — also caught the most poundage. 293 pounds of king salmon over 5 days.

So Bob is obviously delighted to come out on top after what could easily be more than 30 years of trying — but can he claim family bragging rights? That king his brother Ernie won with 57 years ago weighed just over 60 pounds. His son Gary held the lead in the 1986 derby with a salmon weighing 60-plus pounds, until the last few minutes when a 70-pounder was entered. And in 1998, daughter Roberta won with a fish weighing 70 lbs 3 oz.!

So Bob may not have caught the biggest fish in the family, but thanks to inflation, it’s the richest. When hidden weight prizes have been announced, and the prize for the heaviest fish-of-the-day has been factored in, Bob could be sitting on close to $10,000.

When Roberta relayed this reporter’s question “How will you spend the money?” he didn’t hesitate to respond: “Any way I damn well please!”

Sitka Salmon Derby results are unofficial until the awards ceremony on Sunday, June 12.