Family restores salmon habitat, one tree at a time 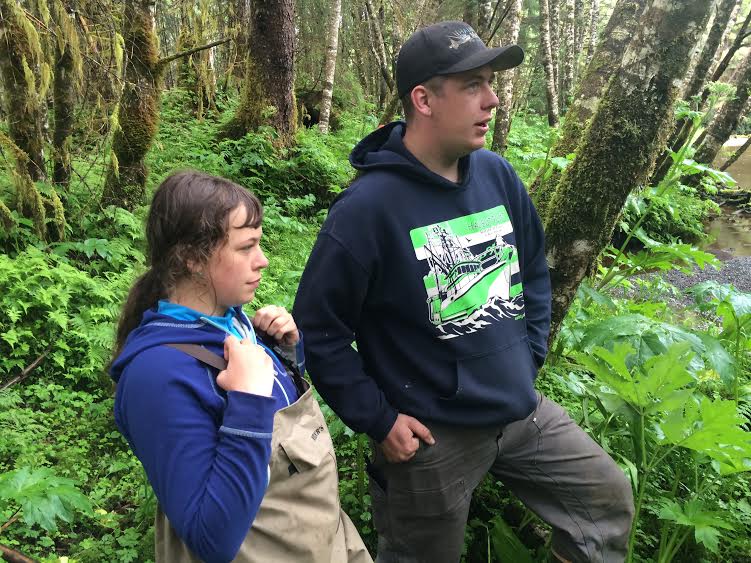 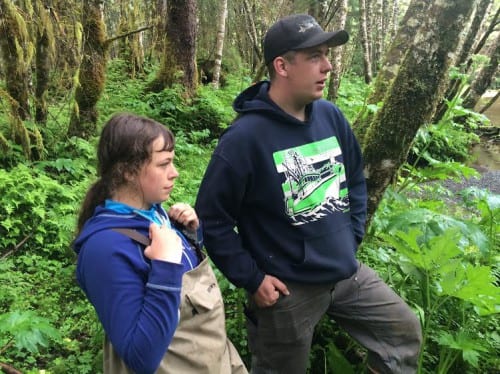 Tyler and Ariel Miller, brother and sister, take a break from their hard work building structures for coho salmon in the Shelikof River. Photo by Katherine Rose, KCAW.

Heavy equipment is rumbling across Kruzof Island near Sitka again, but this time the big rigs are not removing trees — instead, they’re putting them back. The Forest Service is restoring salmon habitat on the Shelikov River that was damaged by logging nearly 50 years ago.  KCAW’s Katherine Rose recently visited the project to learn why it takes so much noise to fix a forest.

You’re on a winding road overgrown with alders. You see a sign that says “Shelikof River Restoration Project ahead.” You might expect to hear something like this…

But for the next few weeks, if you wander deep in the forest on Kruzof Island, you may hear something like this instead…

Sounds of machinery and trees being crushed

That’s Todd Miller knocking over alders with his excavator.  When you hear the trees snap and fall, you might immediately think “destruction.” Because that’s what it sounds like. Not restoration.

“When this was logged back in the day it was not regulated as much. There was a lot of logging where they actually used the rivers as roads. They’d just get in ’em with their dozers, and it was an easy way to move wood,” said Todd.

Todd owns TM Construction, which typically does commercial tree thinning. But today he’s working with the Forest Service and the Nature Conservancy on a watershed restoration project to rebuild the coho salmon habitat.

“He’s gonna jump over there and start building that trail in there, and we’re gonna build a structure for the fish.”

Todd’s son, Tyler, is the foreman, and he runs the skidder, or the “Big Twig Rig” as he calls it.

“I think just because it makes big trees look like twigs, basically. It’s got probably about fifty-inch tires with massive chains on it. It’s basically like a big monster truck,” said Tyler.

With the Big Twig Rig, Tyler grabs the trees, bringing them to his dad. Then Todd uses the excavator to strategically place them in the river, using the alders and larger trees to both redirect the path of the river and build a sort-of dam. And then there’s Todd’s daughter, Ariel. She’s only 14, but she has an important job too.

“I put boom in the water which is a round absorbent pad that, if they break a HydroHose or leak oil, the boom will collect it,” said Ariel.

And Todd says those aren’t the only spills that happen on the job.

“First day we were working in the river with Marty. A log fell out of the bucket and I dropped it or whatever, and splashed the inspector,” said Todd.

“He stayed well away after that. He didn’t have time to duck or anything, he just took it all. I was laughing so hard, dad was like, Oh my gosh, I’m so sorry, so sorry, I didn’t mean for that to happen,” added Ariel.

When these woods were logged in the 1960’s, trees were cut down all the way to river’s edge. Even the trees in the river were removed, leaving virtually no pools for coho salmon to rest and breed. Norman Cohen is interim director of conservation for the Nature Conservancy in Juneau. They help the Forest Service fund watershed restoration projects like this one.

“While the trees are growing back to, we want to try to make sure those habitat conditions are in place so that over the long-term the stream is resilient, the habitat is working, and the fish come back,” said Cohen.

In a few weeks, phase one of the project will be complete, and the group will move on to phase two, when logs will be lowered into the river by helicopters.

Sounds of machinery fade in

A large piece of a log floats by, and and the Millers’ black lab, Trigger, bounds into the river, luckily catching it between his teeth. He drops it on the shoreline, and starts to dig in the sand.

Sound of dog digging in sand, whimpering, splashes of the logs

Trigger is already reaping rewards from the new watershed, and the team hopes the coho salmon fry will too. The Miller family, the Forest Service and the Nature Conservancy will be finished with this project soon. And instead of hearing this…

Sound of the machinery

Visitors to Kruzof Island will  hear this…