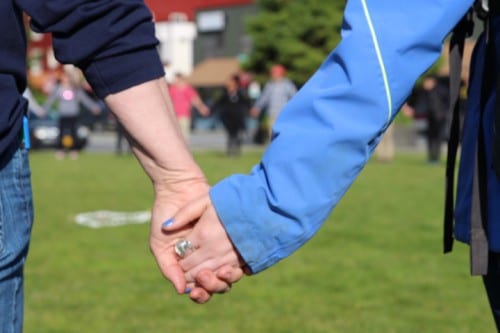 A crowd of nearly 100 Sitkans gathered in Totem Square last night (06-13-16), to honor the 49 victims of Sunday’s (06-12-16) shooting at Pulse, an Orlando nightclub. Organized by Sitkan Hannah Guggenheim, the group gathered beneath a blue sky in a big circle and, holding strips of orange paper, took turns reading the forty nine name aloud. 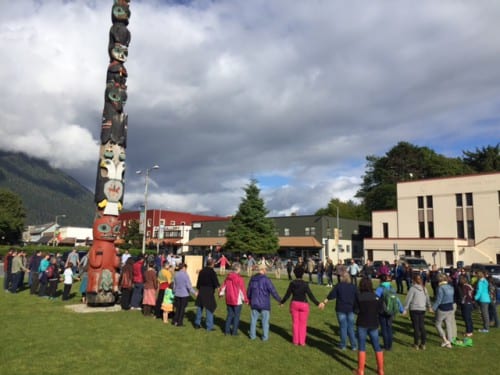 Guggenheim said she organized the gathering to mirror similar events in Washington D.C., New York City, and other cities across the United States. “Nothing had happened quite yet in Sitka. And I just thought, ‘Well, let’s think of a date. Set it. So, Monday seemed like a good time for everybody to get together right after work and I posted it on Sitka Chatters.’ 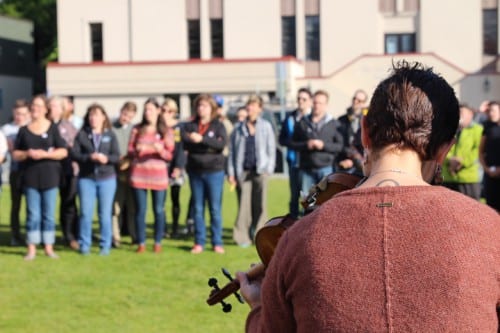 Debbie Terry spoke first. She lived in Orlando for 30 years and was a volunteer therapist at a LGBTQ community center for 20 years. “Yesterday, I couldn’t breathe. I stayed under my covers and watched the images on Facebook and TV over and over.” Terry personally knows Barbara Pomo, the owner of the nightclub where the shooting took place. She said, “The name of the nightclub – “Pulse” – represents the heartbeat of [Pomo’s] brother, who died of HIV, and just to continue a safe, lively place for people to go to and feel safe.” 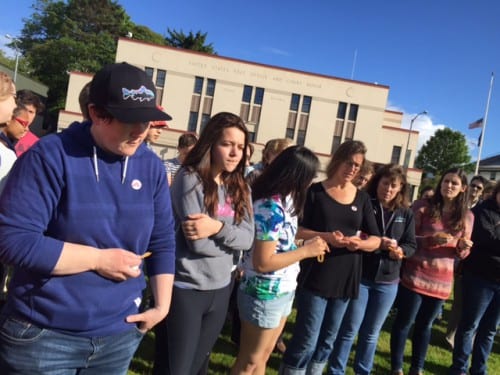 Sitkans read the names of the 49 victims of the Orlando shootings, which range in age from 18 to 50. (Emily Kwong/KCAW photo)

Reading from a piece of paper, Terry told the group, “I’ve been disheartened by a few messages saying that these 49 young people deserved to be slaughtered. I can’t fathom how anyone can think this. And I won’t dwell on such destructive thoughts. Instead, I focus on the Orlando Cemetery that is offering free cemetery plots for all the victims of the shooting.”

Guggenheim then invited anyone in the circle to speak freely.

Woman: This is not the act of one lone gunman. This is the act of a racist, homophobic, misogynist, supremacist society. We can change that. We have to step into the uncomfortable place, of that one moment where somebody  says something and you just want to let it slide. That moment is one step towards changing this.

John McTague: I live in Washington D.C. I’m going to get on a plane tomorrow and go home to my husband and my dog, who I’m looking forward to seeing very much. Especially my dog. And I’m just so appreciative that this happened here. That this vigil happened here. 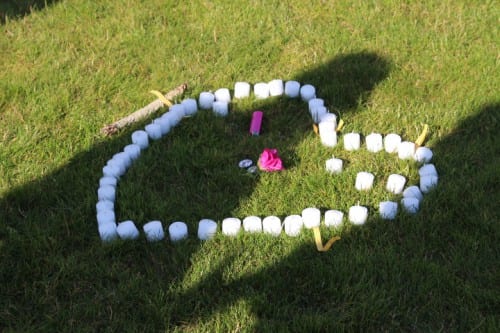 The group arranged 49 tea lights into the shape of the heart. It was too windy to light them. The candles were distributed among the group to take home. (Katherine Rose/KCAW photo)

More people spoke. And then Guggenheim brought out 49 white tea lights for people to take home, but not before the group laid them in the grass in the formation of a heart.

Hannah Guggenheim:I think it was really amazing to see people wanting to show up. Needing to be together. It was pretty incredible to see it take shape. You couldn’t curate a moment like that. It was something that was born out of itself: people needing to talk, needing to feel, needing to connect. 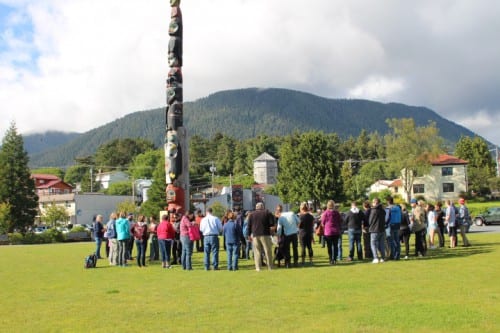 Guggenheim was happy with the turnout. “You couldn’t curate a moment like that. It was something that was born out of itself: people needing to talk, needing to feel, needing to connect,” she said. (Katherine Rose/KCAW photo)