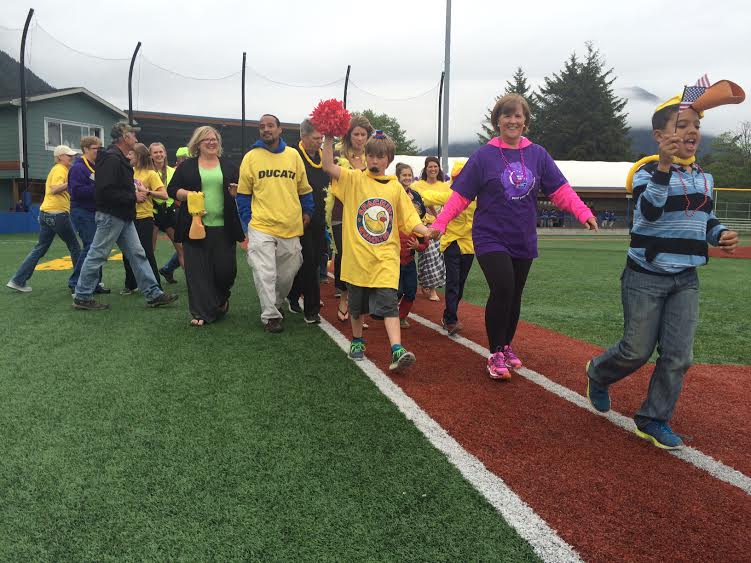 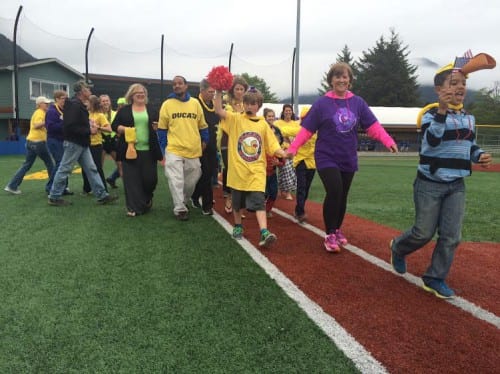 Carrie Spackman leads a group of cancer survivors and their caregivers around the bases at last weekend’s Relay For Life event (Photo KCAW/Katherine Rose).

So, there’s a bit of a scheduling conflict. The pee wee baseball team is playing a game tonight. And Relay For Life was supposed to start at 6:00, here on Moller Field, but everyone is working together. In fact, Carrie Spackman threw out the first pitch. Her husband, Hal Spackman, was pretty impressed.

“I’ve never seen her really throw a ball, so it’s pretty good that she got it there,” said Hal.

Carrie works as Sitka High School’s secretary, and she’s beloved by the students and staff. Four years ago, she discovered she had lung cancer.

“It’s something that you don’t expect, even because neither one of us ever smoked a day in our life, and yet she gets lung cancer, very low prognosis. But she’s four years out, and it looks like she’s cancer free.”

“Having cancer and needing the support from your friends and community is what I believe was half of my medicine,” added Carrie.

Carrie, along with about 15 other survivors don purple shirts for first event of the weekend– the survivor lap. They rounded the bases to Kelly Clarkson’s “What Doesn’t Kill You Makes You Stronger”

Each, year, communities across the country sponsor Relay for Life events. For 24 hours, people walk or run laps to raise awareness and funds for cancer research. In 2015, 276 million of ACS’s money went directly to those fighting cancer, patient support like flights and comped hotel rooms.

“Raising funds when you can’t do it or your family can’t is wonderful. They were right there all the time. They would just send me some monetary value, and that would go to transportation, lodging, whatever you need, so it’s very important,” said Spackman.

Hannah Ray is a community manager for the Alaska branch of the American Cancer Society and Relay for Life. She works with fourteen communities around the state, including Sitka. Ray says access to healthcare is a big factor.

“Our transportation is very different in Alaska. Obviously some of our communities can only be accessed by flights. I’ve taken the puddle jumpers out to Nome, and I can only imagine being a cancer patient there and not imagining what I was going to do,” said Ray.

In the past year, the American Cancer Society has helped over 1000 Alaskan cancer patients with their treatment, paying for transport, hotel rooms, and cosmetic kits for those undergoing chemotherapy and radiation.

After the survivors round the bases for the first lap, they go around again, this time with their caretakers, their families. Many of the children here this evening are dressed as ducks, with yellow feather boas and orange construction paper beaks. That’s for Carrie.

“I have a duck collection at the high school. I have about a thousand now. Kids come and go to colleges on vacations, and they always bring me back a little rubber duck. I just took on the duck collection, next time I’m gonna start with jewelry, but this time it was ducks,” said Spackman.

And like ducks, the driving events weren’t enough to keep people away. By the end of the event, Sitkans raised over $14,000, but the total is unofficial, as the team still has until August 1 to raise funds.