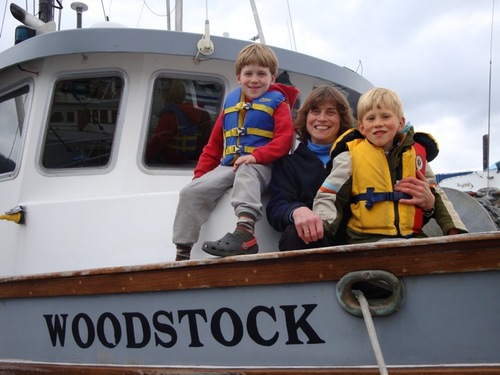 Linda Behnken with her sons, Rio and Hahlen. Behnken lives the small-boat fishing life she advocates for, but she’s no stranger to IPHC politics. She’s chaired the 84-member IPHC Conference Board for the last several years. (ALFA photo/Mim McConnell)

Behnken, whose name has been under consideration for the international panel for some time, was appointed on June 22, shortly after the prior Alaska representative was fined for overfishing.

Linda Behnken has been at the center of some of the most important decisions in groundfish policy in the North Pacific. During her nine years on the North Pacific Fisheries Management Council — the regulatory body overseeing fishing in federal waters offshore of Alaska — she was instrumental in banning bottom trawling in Southeast, and she was an architect of individual fishing quotas for halibut and black cod. 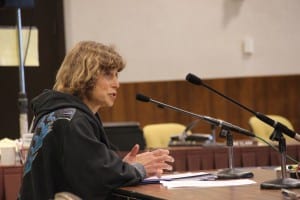 Behnken testifies before the Alaska State Board of Fisheries in 2015. (Rachel Waldholz, KCAW)

The International Pacific Halibut Commission sets harvest limits for commercial fishermen across the Gulf of Alaska. Her appointment to the IPHC comes at a time when that organization also is rethinking its long-standing management policies.

“The IPHC is testing some different approaches right now to final decisions about managing halibut. Providing a risk analysis decision-making table to the public and to the commissioners and letting the commissioners understand where the certainty is, where the risks are, and make educated informed decisions around that. Rather than scientists saying, Here are your numbers for setting the quota.”

Behnken has been the executive director of the Alaska Longline Fishermen’s Association in Sitka for most of its history. She’s been a strong proponent of science-based management, but she also understands that the IPHC is where science and politics sometimes meet.

“It’s important to follow the science and err on the side of conservation. But there’s certainly been frustration in our area — Southeast — that quotas have been set significantly over recommended levels for British Columbia, our neighbors, while commissioners have set much more conservative quotas in this area. Despite the fact that all the indicators of stock recovery are strongest here.”

Behnken is one of six commissioners — three from the US, three from Canada — who determine the annual halibut harvest. They have an extensive organization and research staff behind them, based at the University of Washington in Seattle.

Behnken says the appointment comes with the obligation to take a broad view of the industry, and of halibut fishing across the gulf — and not just off Southeast Alaska.

Nevertheless, she gave this interview while running her boat out to go longlining for black cod. Becoming a commissioner will not erase who she is.

“I come from a fishing science background. I’ve had the luck to fish from the Gulf to the Bering Sea. I’m more knowledgeable about this area from fishing here longer. I’m committed to the whole industry and to the resource, and to small boats. That’s the perspective I think I bring to the process.”

Behnken’s appointment is considered interim until it is actually confirmed by the sitting US President — a process that has no predictable timeline. In the meantime, Behnken will enjoy full powers of a commissioner.

The IPHC has been in the news recently — not all of it good. Behnken’s predecessor, Jeff Kauffman, resigned his appointment after agreeing to pay a shared fine of $49,000 with two colleagues for overfishing halibut in 2012. The fine was levied by the National Oceanic and Atmospheric Administration’s Office of Law Enforcement. Kauffman and the two other men reportedly exceeded their combined quota by 10,000 pounds.

Kauffman is a resident of Wasilla. He is the vice-president of the Central Bering Sea Fishermen’s Association.