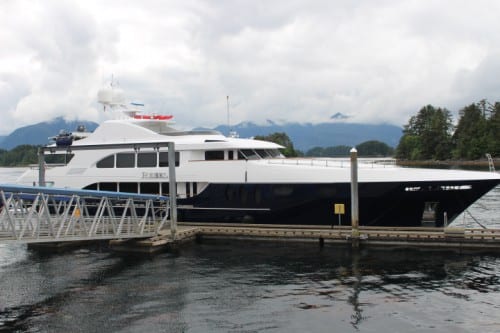 The 165′ motor yacht Rebel at the O’Connell Bridge Lightering Dock. Passengers from the cruise ship Silver Shadow will lighter this weekend (Sat 7-2-16) to Crescent Harbor, so that super-yachts like the Rebel can tie up here. With more cruise ships landing at the privately-owned Old Sitka Dock, the city will transition this site to “a super-yacht facility,” said administrator Mark Gorman. (KCAW photo/Robert Woolsey)

Having devoted a solid hour in special session Tuesday night (6-28-16) discussing the necessity of raising property taxes in Sitka, the assembly — in its regular meeting — was cautious about spending — even someone else’s money.

The Public Works Department is applying for $1.3-million in state alternative transportation funding to complete Phase II of the Sitka Seawalk. Assembly member Steven Eisenbeisz asked administrator Mark Gorman if this was still a good idea.

Eisenbeisz – My understanding is that the city will no longer use the O’Connell lightering facility as a lightering facility. If that’s the case, why do we need to build a seawalk to it? Of course this would be grant funded, but then we would be responsible for maintaining it for here on after.
Gorman – Our intent is to continue operating the float as a super-yacht facility once Harrigan Centennial Hall is completed. The purpose of extending the seawalk, which has been part of the plan for a number of years, is to make sure that cruise ship visitors do funnel down to that part of Sitka. In fact just last week I met with some of the — I call them the North End Lincoln Street Business Owners — and they were saying how hard they’d been impacted by the cruise ships going out to the Old Sitka Dock. And I have witnessed that when there is a boat that is lightering in under the bridge, the North Lincoln Street businesses get a lot more foot traffic. So, it’s really to make the cruise ship visitors’ experience more comprehensive and accessible.

The total project budget for the Seawalk extension is $1.7-million, with $140,000 coming from the so-called cruise ship head tax. Public works director Michael Harmon thought the money would be put to good use long into the future.

Harmon – In the concept plan, one area of focus is that it’s kind of awkward at the corner of City Hall and Raven Radio, and how that ties into Totem Square. And we’d like to do something with that intersection to clean that up, and the Jersey barrier in the water there, and get that looking better. So ideally the passengers would still flow in that end of town.

Eisenbeisz, who owns the Russell’s clothing store on Lincoln Street, finally agreed to support the city’s application for funding for the Seawalk, once he had been assured that it would not be a financial burden to the city to maintain.

The assembly also passed on first reading an ordinance creating a comprehensive credit and debt collection policy for the city. Chief Finance Officer Jay Sweeney estimated that there was about $1-million owing to the city across various departments. He did not think much could be done about these bad debts under current policy. He was clearly frustrated.

Sweeney – I have to tell you — if you want to see me get animated — that there is nothing more frustrating than trying to collect debts owed to the City and Borough of Sitka. I’ve told folks that it’s like hunting flies with a bb gun. You just shoot, shoot, shoot, and every once in awhile you get one. But other than that we waste hours and hours of time trying to collect these bad debts that are owed to the municipality.

Sweeney said that many people will dispute a bill, or some portion of it, and simply not pay. He resorted again to metaphor.

Sweeney – I really feel like I’m trying to rope the wind out there.

The ordinance doesn’t necessarily give the city powers that it doesn’t already have, but it opens the door to allowing the Finance Department to create a pre-payment system for rentals in Harrigan Centennial Hall, for example. Or for requiring landlords to resolve unpaid utility bills in rentals before new tenants could open utility accounts.

Most of the debt owed to the city, Sweeney said, is in small amounts.

Sweeney – It’s like dandelions in your front yard. Or buttercups. No matter how hard you work at getting rid of them, they never go away, and they pop right back up again.

The assembly was on board with the ordinance, except for one member. Tristan Guevin didn’t like the idea of a crackdown on people who might be honest, but struggling.

Guevin – I think a comprehensive collections and credit policy would include a safety net. As I’ve been thinking about this over the course of the last few months I keep coming back to Sitka Community Hospital. They have very solid policies and procedures in place for collection of debt and extension of credit, but they also have charity care. There’s money set aside every year for people who can’t afford to pay their healthcare bills and for me I see electricty, waste water, solid waste, your ability to heat your home, just as critical as healthcare.

Sweeney responded that the ordinance would give the city administrator the ability to forgive debt on a case-by-case basis. The assembly passed the ordinance on first reading, 6-1, with Guevin opposed.