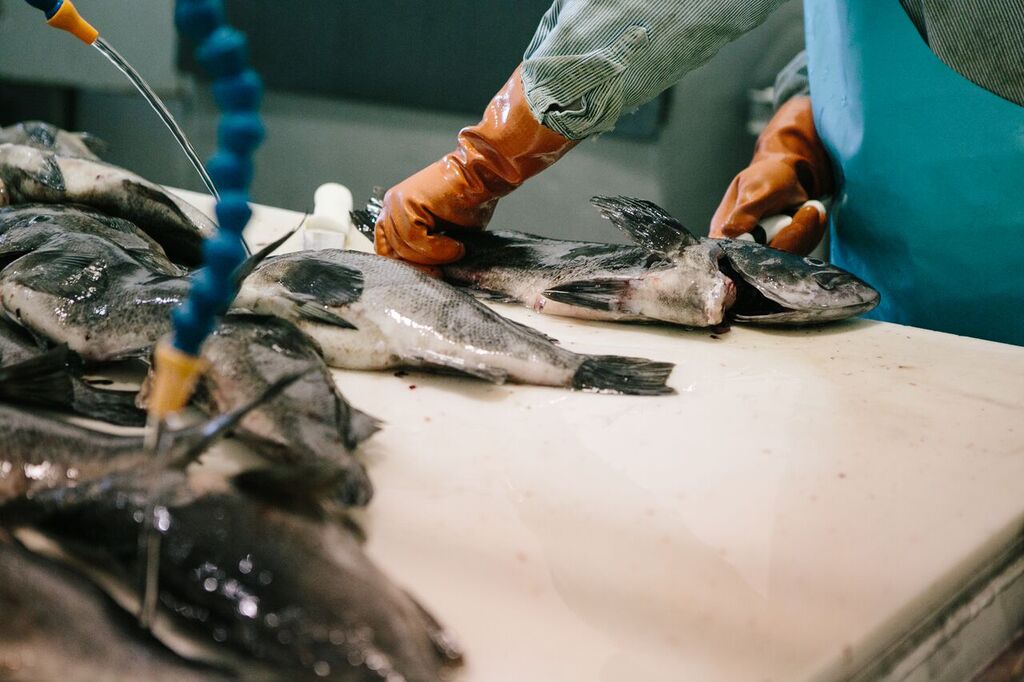 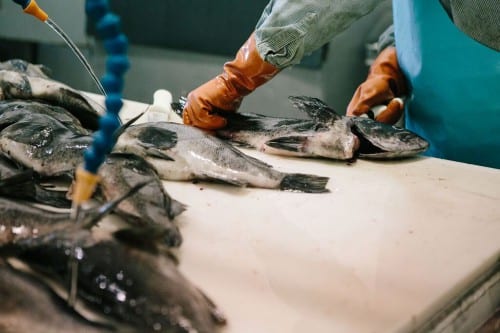 If you’ve spent any time enjoying a drink at Baranof Brewery, you may have glanced across the street and wondered what’s going on behind the doors at Sitka Salmon Shares. It’s been over a year since the company purchased the Big Blue processing plant and, slowly but surely, they’re turning the space into one that suits their needs. KCAW’s Katherine Rose checked in with the company, to find out how they’re adjusting to the move.

Sounds of the plant/engine/processors working

It’s a bit chaotic in here. There’s lumber all over the floor of what’s soon going to be the new smoke room for Sitka Salmon Shares, but Director Jason Croft has a vision for the space.

“It’ll be cleaned up and there won’t be lumber laying all around,” said Croft. “This is where the brining will take place. Right now we’re tinkering with a few different recipes. For fun we throw in things like a bourbon glaze or a salmon berry glaze, a simple cooked down with a little sugar added to it, and it’s delicious.”

Smoking is a relatively new addition for a business that’s doing so many things. Sitka Salmon Shares, an idea born in a midwestern professor’s classroom, is in part Community Supported Fishery that packages and sends salmon to customers in the midwest, but they also do custom and commercial processing. Each year the business has grown, and the purchase of Big Blue was necessary to keep up with the expansion.

“Every year we’ve seen anywhere between a 20 and a 40 percent growth in our sales…We have not seen a spike in income from owning this place, what we’ve seen is a reduction in income, but an increase in revenue. Our expenses have gone up,” Croft said.

Since purchasing the facility last March, they’ve made several additions to the facility, most notably the freezer, with dual compressors, the “Mercedes of blast freezers” as Croft calls it. Their last freezer wasn’t holding up to the quantities of fish they were bringing in.

“It wasn’t a poor freezer, it just couldn’t keep up. There were a few times last year when we were putting it to its limits,” said Croft. “Our freezer now, we can put 5, 6, 7000 pounds in there pretty easily. It can handle everything we’ve thrown at it so far. When we get into high volume cohos, and we switch to commercial production mode, that’s when we’ll see the real test of our freezer.”

Right now they’re mostly taking in King salmon. And most of those are smaller than usual.

“I’d be hard-pressed to identify an average weight, but probably in the 12-15 pound range. Although just yesterday we saw one at 45 pounds. Which would have won the derby, I think,” said Croft.

The whole building hums from the sound of the engines that keep the freezer running, and the closer you get to the freezer, the more that hum begins to resemble a roar.

Sound of the engines from the freezer, roaring loudly

Croft says someone lives in an apartment upstairs, and I’m curious if the sound bugs him, but I don’t get the chance to ask. If you can get past the initial noise,  there are more delicate sounds to be heard. They make their own flaked ice on site.

“It’s a reflective place to be, the sound of ice tinkling down from the ceiling,” Croft said.

Now they’re working on the smoking room, building up the custom processing program, and maybe next on the docket- a small retail space to sell an assortment of their products locally. But don’t expect the front of Sitka Salmon Shares to resemble SeaMart anytime soon.

“If we do the retail program this year, and I think that’s a big IF, it will be modest. It’ll be probably just a small chest freezer. And that’s ok, the product’s still wonderful. Maybe the first year we won’t have a beautiful display for it yet.”

The transition into the new facility wasn’t completely smooth, though.

“None of the staff from last year is with us anymore. We had a full turnover from this year to last year.”

According to Croft, processing plants tend to have higher turnover as workers seek jobs on boats. To add to that challenge, it’s not exactly the most ideal location for a seafood plant…

“I always find it kind of silly that we’re up here on a hill, and we’re a seafood processor. We’re the only ones, as far as I know. It makes the job a little tricky because we do have to get in a truck and drive down to where the fish are when they’re being offloaded.”

But there’s one thing about their location that’s very convenient, especially for getting the word out about their products.

As of now, Sitka Salmon Shares doesn’t have a timeline for when the retail facility will be available to Sitkans, but maybe soon you’ll be able to grab a beer at Baranof Brewery, you’ll be able to smell the salmon too.