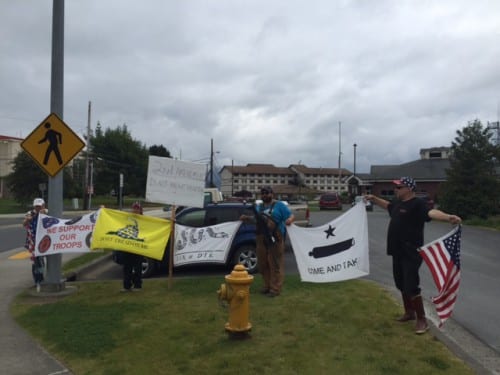 Congressman Young was met with demonstrators calling for climate change legislation and gun control. This angered some Sitkans, who staged a pro-gun rally at the roundabout. (Emily Kwong, KCAW photo)

Yesterday (07-21-16) was the last day of the Republican National Convention. And in Sitka, the longest-serving Republican came to visit. Representative Donald Young was scheduled to speak to the Chamber of Commerce at noon. But he first had to pass through a group of pretty disgruntled constituents.

Seven Sitkans clustered at the back entrance of the Westmark Hotel, awaiting Congressman Young and bearing signs written in black marker.

Andrew Thoms’s sign read, “Congratulations on your retirement.” Thoms explained, “It’s a not so subliminal message that it’s time for Don Young to pass on the reins of leadership to the next generation that’s going to have to deal with the issues that he’s not dealing with. Especially climate change.” 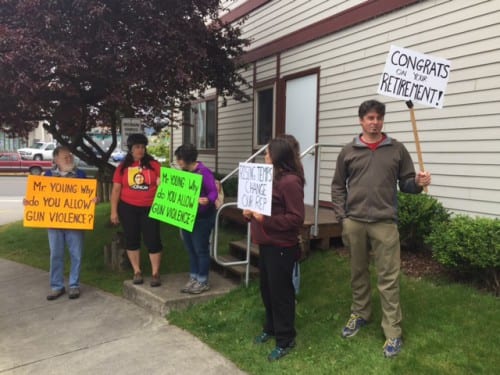 Throughout his 44 years in office, Young has maintained his position that climate change is not caused by human activity and that guns shouldn’t be regulated. This bothers Don Muller, who said, “Well, NRA’s given [Young] an A+. You don’t get an NRA A+ by being open-minded about gun control.”

Leading the group was a Vietnam veteran, but he asked not to be named. The group circled the Westmark twice. Traffic on Lincoln Street took note.  And, while a few passerby offered fist bumps in solidarity, others weren’t so polite.

Muller: What did he do?
Vietnam veteran: He gave me the finger.
Littman: Seriously that’s…

And then, a car slows down, guy sticks his neck out of the window and says, “You guys are pissing me off. And doing a good job of it. Keep it up.” 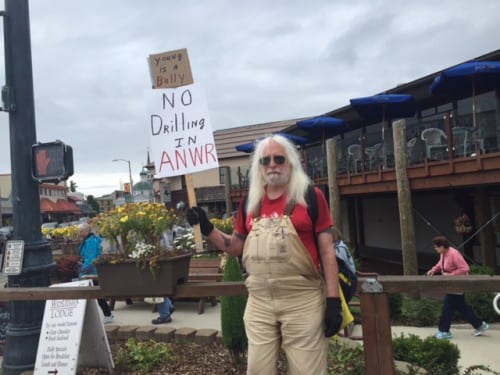 I asked demonstrator Cindy Littman,”What is it like protesting in Sitka?” She said, “It’s uncomfortable to be out here, but I would welcome an opportunity for someone to ask me about why I’m standing here and actually have a conversation about it.”

Littman wishes more members of Sitka’s liberal community had come out, but isn’t surprised by the low-turnout. “People just don’t feel like he’s responsive at all. That was my first reaction. Was to not even bother to come out.”

And then, the moment everyone’s been waiting for. Congressman Young came up the sidewalk and seeing the protestors, grinned. “I’m glad you spelled my name right!,” he quipped. And after bidding them good luck, walked into the hotel. 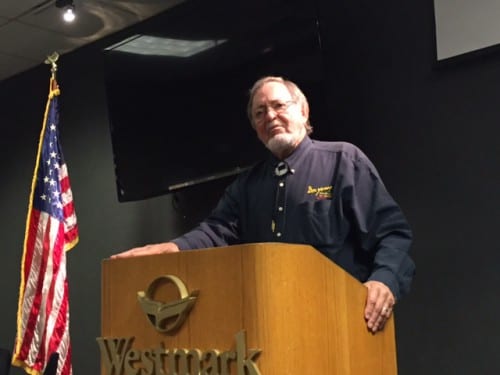 Young soon took to the podium. He told Chamber of Commerce members that he doesn’t mind the presence of protesters. “That means I’m being recognized. They may not agree with me, but at least they recognize I’m alive and well. I noticed one sign said, ‘Enjoy your retirement,’ and believe me if I was to be beat or I was to retire, I’d enjoy it. I think I’m good for the state.”

This is a campaign year for Young. And his remarks circled back to why he’s good for Alaska and Alaska’s economy. “There’s only one real wealth in this country, in this state and that’s resources. And the development of. The manufacturing of,” Young said.

Last fall, Young introduced a bill that give the state access to 2 million of federal land for timber harvest (H.R. 3560). President Obama is unlikely to sign it. But Young was victorious more recently, adding five amendments to an Interior Appropriations bill that would rollback part of the federal management’s plan for Alaska in favor of state rules.

“No one else does that,” Young said. “That’s because of seniority and knowledge and people that the play the game.”

Of his challenger for the single House seat, Democrat Steve Lindbeck, who is the former general manager of Alaska Public Media, Young says he’s not feeling much of a threat.

“[Lindbeck] is too old for the job. I’m 83 years old. He’s 63. But when he gets to my age he’ll be dead. And that’s the facts of life. And I’m good at this. I’m fired up. I’ve got a great new wife. And that’s up to you: in the Chambers and the business people in this community and the people of Alaska and those people who protest me, let them have it. I’m still here,” Young said.”

Watching him speak was Young’s new wife Anne, a flight nurse from Fairbanks. As for the presidential election, Young says he hadn’t made up his mind yet.

Young isn’t the only one concerned about the federal overreach. For while he was speaking, another protest formed a few yards away.

Six Sitkans are waving a variety of flags: American and others saying “Support our Troops” and “Don’t Tread on Me.” Jake Denherder said he organized the pop-up rally in response to the Don Young rally and it’s anti-gun messages. “We already have too many gun laws in this country and I thought I’d come down and show everyone what I think,” he said.

Standing in the roundabout, Denherder has an assault rifle, a SCAR 17,308, slung across his shoulder. Dave Fowler saw Denherder, pulled over and joined in. Fowler said, “It’s not about hunting and it’s not about personal defense. It’s about being able to defend yourself against unruly government.

This protest, unlike the other one, is receiving a chorus of honking horns. Denherder is a supporter of Young, telling KCAW, “Don Young has always been a strong supporter of the right to keep and bear arms.” The other members of the group, however, wanted to elect someone new.

KCAW: Congressman Young, what do you think of him?
Fowler: He’s been there too long. He needs to go. We need fresh people. We need Tea Party guys in there.

It’s pretty unusual in Sitka to see so much political demonstration – from both parties – in one city block. But in a way, all these individuals, Congressman Young included, are exercising one thing. And that’s our freedom of speech.

In a previous version of this story, we stated that all members of the pro-gun rally were not satisfied with Congressman Young. Jake Denherder is, however, in support and appreciates Young’s protection of the Second Amendment.