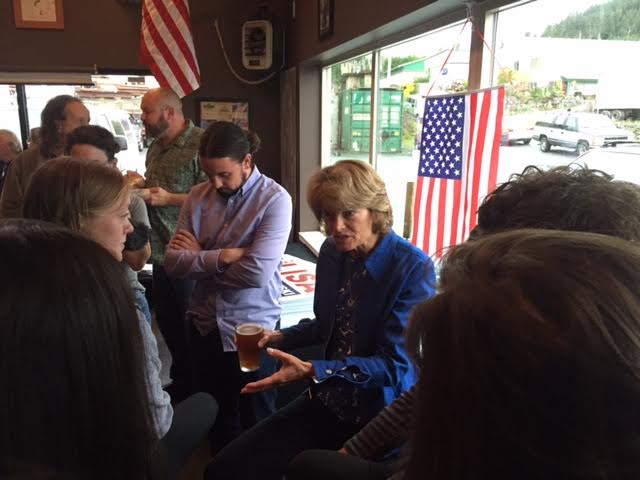 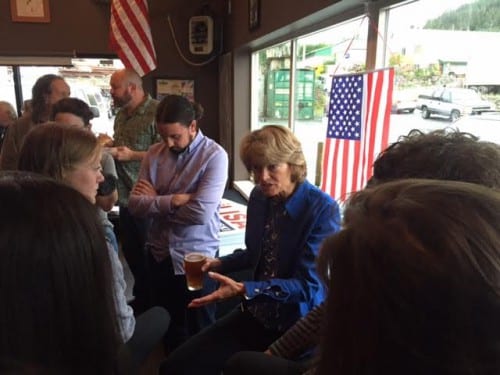 Election season is upon us. For some, the measure of a good candidate isn’t their platform or their policy record, but simply: can you have a beer with them? Alaska U.S. Sen. Lisa Murkowski put that to the test on July 27,  when she spoke to a group of constituents over pizza and beer at Baranof Island Brewing Co. KCAW’s Katherine Rose caught up with Murkowski to hear her thoughts on oil, the Tongass, and Trump.

“Why are you here at BIBCO? And I’m like, I figure when you go to Sitka, you should go to where the Sitkans hang out.”

Republican Sen. Lisa Murkowski is standing amid beers and balloons, speaking to a group of Sitkans. Rather than hold a town hall type forum, she kept her remarks brief and circulated through the crowd, talking one-on-one with attendees. Many were wondering, Trump or Clinton?

Murkowski hasn’t made up her mind. She says she has great concerns about some of Clinton’s policies and has issues with Trump in general.

“We talk about a lot of things, and of course the rules of the women’s bipartisan dinners, we can’t share what we talk about with anybody else,” Murkowski said. “But let me tell you, we talk about everything and everybody.”

But it’s not all about the presidential race. At the Capitol, Murkowski chairs the Senate Energy and Natural Resources Committee.

‘Which essentially makes her one of the most powerful people in the world when it comes to climate change solutions,” said Sophie Nethercut, with the Sitka Conservation Society. Many Sitkans wanted to speak to the senator about the environment, climate change and the state’s dependence on oil.

“Hopefully we’ll be able to talk about how electric vehicles here in Sitka can fit into the climate change picture for Alaska,” said Dave Nicholls.

Murkowski floated around the room, talking to people one-on-one about their concerns.

“I think we need to recognize that we are a state that has been built off of our resources,” said Murkowski. “We are a resource-rich state, and so how we access our resources to the benefit of Alaskans and to the benefit of a larger community is important to the success of our economy. Right now I think we all acknowledge that with the price of oil and with the downward trajectory on projections, it is not something that we can count on with any reliability.”

Murkowski says while we can’t control oil prices, the state has the ability to control production on state land. The problem is that roughly 60 percent of Alaska is owned by the federal government.

“It took Conoco close to seven years to get a permit to build a bridge. There is more that we can do to be a more cooperative process to gain access to the resource.”

As for resources closer to home, Murkowski responded to questions about the Tongass Land Management Plan. Three Sitkans served on the Tongass Advisory Committee, or TAC, which recommended a plan for transitioning logging from old growth to new growth trees. Murkowski proposed legislation that would halt the  transition until a full inventory of the Tongass is completed.

“All I’m asking for is that we have an honest inventory,” Murkowski said. “There have been some that have suggested that it is my attempt to stop the TAC recommendations. That is not the case, that is not the plan, what I want to do is make sure that this transition that we’re moving to with young growth is, in fact, based on the good analysis that we will receive through this comprehensive inventory that was a direct recommendation of the TAC.”

Murkowski will be back in Sitka in a few weeks, and we can expect to see more politicians making the rounds leading up to the elections this November.