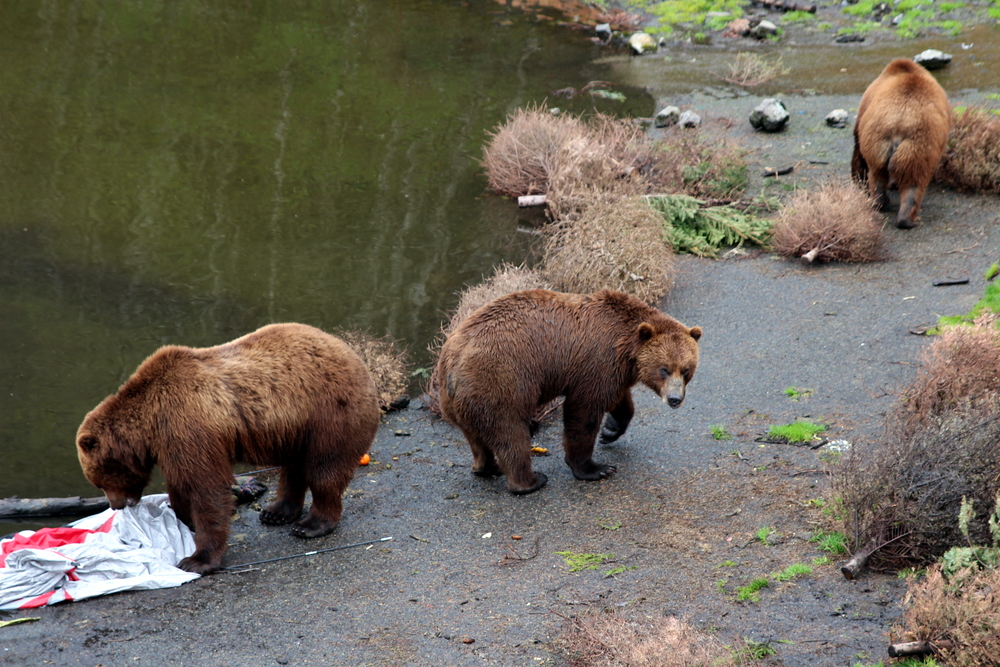 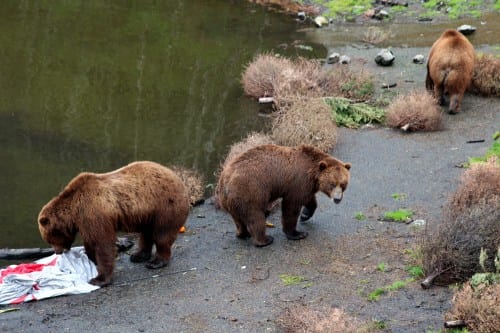 Brown bears Baloo, Toby, and Lucky, after shredding a tent baited with a hot dog, during a school demonstration at the Fortress in 2015. (KCAW photo/Robert Woolsey)

Plans are in motion at Sitka’s industrial park to give a nonprofit bear habitat the land it’s been leasing for the last 13 years.

The board of the Gary Paxton Industrial Park on Tuesday (8-16-16) authorized a survey of the land occupied by The Fortress of the Bear, with the intention of selling the organization the site in the near future.

Although it’s technically a land sale, the board of the Gary Paxton Industrial Park — known as GPIP — settled on a small price tag for Fortress of the Bear: $100.

Sitka administrator Mark Gorman sat in on the discussion of the proposed sale. He said the assembly, which would have to approve the deal, would likely feel pressure from the public to justify the $100 price.

The feeling around the board table was expressed by board member Dan Jones, who asked “Is it consistent with our mission of economic development?” 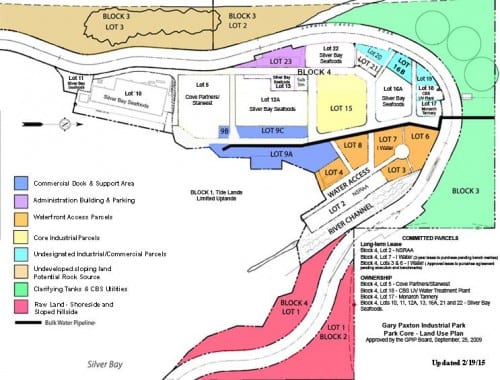 The former APC Mill clarifier tanks occupied by the Fortress of the Bear are depicted in the upper right corner of the GPIP map. The third tank is the city’s recycling/scrap yard. The Fortress site has been appraised at $3.50/sq ft, or about $414,000. (GPIP image)

Other board members agreed. Charles Horan said, “As long as we’re getting the benefit, I don’t have a problem with donating the land.” Horan went on to mention a sticking point: “How do we ensure that the use continues when Les and Evy leave?”

Evy and Les Kinnear co-founded the Fortress of the Bear in 2003, and somewhat famously demonstrated the capacity of the facility by raising enormous hogs.

Les Kinnear is confident the Fortress will outlast him.

“We’ve had bears there now for nine years. Some of those bears will live another 20 years. I plan on giving them a better home toward the end than they’ve had all along.”

Kinnear told the board that he’d invested nearly $400,000 in his own money and sweat equity into the project, which receives visits from 20-percent of Sitka’s cruise passengers each year. They are at capacity and would like to expand, but grant funding and other investment, Kinnear said, was contingent on owning the land.

Evy Kinnear said the Fortress was grooming younger staff to take over management of the operation in about 5 years, when she and Les can retire.

“We have a strong board now. We don’t run it, the board runs it. We’re at their mercy. It’s going to be up to them — it’s not up to us anymore. As a nonprofit, that’s what they do.”

Part of the GPIP board’s interest in giving the land to the Fortress is the onus of keeping it in city hands. The Fortress occupies two large concrete clarifier tanks built by the Alaska Pulp Corporation mill in the 1950s. Park director Garry White said that a very conservative estimate for demolishing the tanks was $250,000. Board members, however, felt the cost could be much more.

There are also some easements across the property because of its proximity to the Blue Lake Hydro project.

The GPIP board felt that the most prudent course of action would be to order an up-to-date survey of the site. New board member Hugh Bevan was particularly frustrated by the lack of current information. “I’m about ready to go out there and do it myself,” he joked.

Once the survey is complete, the GPIP board plans to forward a proposal for the sale of the Fortress to the Sitka assembly.