Sitka church a refuge ‘as mountains slide into the sea’ 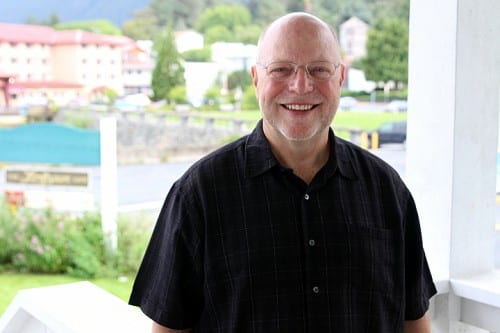 Pastor Paul McArthur says Grace Harbor Church is just a tool for the ministry, like the “hands and feet of its congregation.” He doesn’t think the church changed much after its dramatic role in the slide recovery effort, although it did have to serve temporarily as a Catholic sanctuary. (KCAW photo/Robert Woolsey)

It took three days to recover the first victim of the August, 2015 landslide in Sitka. A full week would go by before the body of the third-and-final person would be found. In the interim, the community of Sitka staged a 24-hour relief effort out of Grace Harbor Church, the nearest building with the capacity to feed dozens of relief workers, shelter neighborhood evacuees, and to comfort the hundreds of residents awaiting news of the victims.

Paul McArthur has been the pastor at Grace Harbor for 30 years. He says his church is just a tool to serve the ministry, and wasn’t fundamentally altered by the way it served the community in the weeks following the slide. But in one way it did change, at least for a short time: Grace Harbor is a Baptist congregation, but two of the victims, the brothers Elmer and Ulises Diaz, were Roman Catholic. Their parents and extended families are all from Mexico.

In the last of our 5-part series looking back on the 2015 Sitka landslide, KCAW’s Robert Woolsey spoke with McArthur about how he bridged faith and tradition to serve a family in need.

McArthur – That was especially personal for me. I had two kids that were in Elmer’s class, so I had known him since he was a little boy. I found out about the slide when a woman from our church who lives on Jacobs Circle, just below where the slide ended, came out and said that the upper part of Kramer was covered with logs. And because my son was building his house up there I wasn’t sure until I texted him, Are you okay? And waited to know if my son and his family had been lost. So that was a very sobering time for me. Then to see Mr. Diaz – Guierrmo – outside standing there through the rest of that day, I had a very real sense of that could be me standing there waiting for news of my family.
KCAW – It couldn’t have been easy confronting Guierrmo Diaz.
McArthur – Guierrmo and Lupe are a very loving family, and they were supported by a lot of their family there as well. And we tried to protect their privacy. It’s not very often — like never — that I have to deal with whether or not to allow TV cameras into our church building. But we had to do that. At the time that the inevitable occured and each of the boys were found, the police had to come and make that news known to the parents. That was a very difficult time, and very much grief.
KCAW – Was Father Andy (Sensenig) there?
McArthur – Yes. There was good representation of our clergy here, but I really got to know Fr. Andy on a much more personal level. And when it came time to do the funeral service for the Diaz boys he and I did that service together.
KCAW – What was it like turning Grace Harbor into a temporary Roman Catholic church?
McArthur – We laughed about this a little bit, to say that a Baptist preacher and a Catholic priest sat down to plan a funeral service sounds like the first line of a joke. We worked together very well on that. I appreciated him a lot. We talked about how the service would be put together, there was some modification from both sides. We recognized that it wasn’t about us. It was about the people who needed to have this opportunity to not only grieve and express that grief, but to receive the comfort that God offers, and we were on one page in that area. So he spoke and brought a message that was related to God being represented in the natural elements of the earth and the water and the stone. I spoke from the heart of a father, someone who loses a family member. What was interesting for us in Sitka is that we tend to think of the mountains as being our place of safety. We have a tsunami warning tower right across the road from us and we’re conscious of our vulnerability to the ocean rising. But our place of safety was that which had now turned against us. And for me that was the opportunity to relate the words from the Psalm: The Lord is our strength and our refuge, a very present help in time of trouble. Therefore I will not fear even though the earth gives way and the mountains slide into the sea.

Paul McArthur is the pastor of Grace Harbor Church in Sitka, which served as ground-zero for the recovery effort following the August 18, 2015 landslide.

Listen to the other stories in KCAW’s 2015 Landslide Retrospective…

Part 1, A weather forecaster returns to Sitka’s slide: ‘We were snakebit.’

Part 2, A city responds to a landslide: ‘It was a loss of innocence’

Part 3, Living in the shadow of the landslide

Part 4, Notes from the Landslide: One Year Later