A nurse’s mission to heal Nepal — and herself 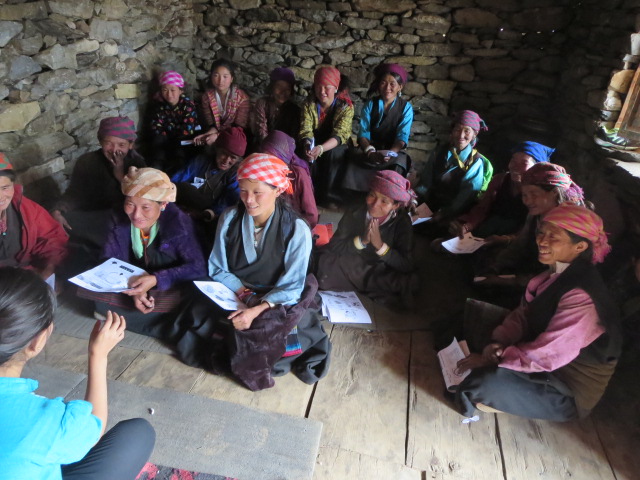 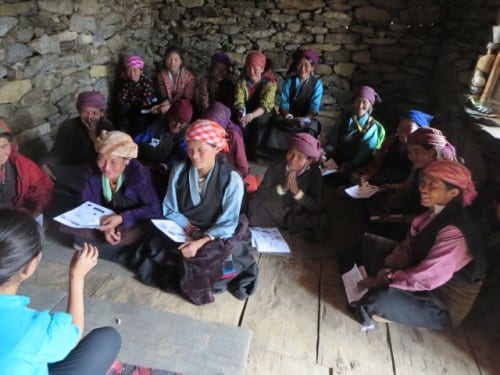 Women from the Upper Tsum Valley gather for a class on childbirth and recovery offered by one of Frazin’s team. (Tsum Valley Medical Mission photo)

A nurse at Mt. Edgecumbe Hospital in Sitka puts the travel in “traveler.” Rachel Frazin spent nearly a month last spring providing medical care in one of Nepal’s most remote valleys — and she’s already planning another trip.

But Frazin’s efforts were not on behalf of one of the NGO’s active in the area. Instead, she assembled the team of 32 doctors, nurses, specialists, translators, and guides herself.

KCAW’s Robert Woolsey asked her why.

Rachel Frazin’s trek to the Upper Tsum Valley in Nepal is a form of grieving. She doesn’t hide that.

KCAW – What was your daughter’s name?
Frazin – Danielle.
KCAW – How old was she when she died?
Frazin – She was a week from her 25th birthday, which I don’t think was accidental. She looked at her life — as many young people do as they approach the quarter-century — and she felt as though she had failed.

That was in 2009. For the last seven years Frazin has been driven to live outside of herself, to make the world a place where her Danielle “would have wanted to live.”

But she didn’t quite know where to begin.

“It was as though she sent me in a raft with a sail and I began tacking. Occasionally running.”

Frazin is a Family Nurse Practitioner. Two years after her daughter’s death she spent 10 days with a Colorado-based NGO in a developed area of Nepal providing medical care. But she heard of other places farther off the beaten path where services were almost non-existent. One was the Tsum Valley.

“It is an intriguing place. It’s been described as the Shangri-La of Nepal. That may be a bit of an overstatement, and perhaps not as true as it was in 2008 when it was first opened to the west.”

Like the fabled Shangri-la of Lost Horizon, the Tsum Valley is accessible only on foot. The upper part of the valley is a seven-day trek from Kathmandu. This sounds romantic, but it’s not — especially through the eyes of a health care professional.

“It would be analogous to living in Sitka and having a child who was burning up with fever, gasping for breath, and you have to walk these mountains for a week to get to a place where there’s a physician and emergency care.” 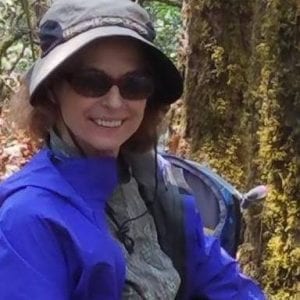 So Frazin decided to take health care to the Tsum Valley, by walking in with a team of doctors and other practitioners. The barriers with the Nepalese government were huge — but she finally obtained a medical permit. Her interactions with the NGO’s working in the area were also mixed, but she won the support of the Empower Nepal Foundation in the US, and the cooperation of Canada’s Compassion Health Center, which had built a monastery and clinic in the Tsum following the disastrous earthquake in Nepal in 2015.

In some ways, the easiest part of Frazin’s job was rounding up people to go with her. She set up a website describing her plans, and providers responded from all over the world. She calls them a motley crew.

“We had a Chinese medicine doctor from Australia who did acupuncture, and the people absolutely love acupuncture. Tibetan people really resonate with that and felt very much cared for. And she also brought herbs as well.”

Her team consisted of 17 medical professionals in all, each of whom contributed $500 to pay for supplies and local support. With interpreters and guides, the Tsum Valley Medical Mission had 32 people in all, diagnosing and treating everything from arthritis to parasitic diseases to cataracts.

More importantly for Frazin, she wanted to create a more efficient model for health care delivery in remote, by generating the first-ever electronic medical records for the residents.

“I am hoping to screen people the way you might be screened in the West, here in America when you go to visit your medical provider for a complete history and exam. I’ll have my translators do a review of systems while people are standing in line 200-deep.”

And those records, Frazin hopes, will be available to the remote medical outposts that serve the Tsum when western providers are absent.

Frazin is already planning another trip to the Tsum next year — this time with fewer people. Perhaps 12, rather than 17. And the Tsum will remain her focus, even though there are many similar valleys throughout the Himalayas.

“If I were to think about all the need everywhere throughout the world, throughout Nepal, I wouldn’t be able to budge. So I’ve decided to devote myself to this one place for the coming years. For as long as I can.”

Although international medicine was always her goal, Frazin doesn’t think she would taken on a challenge this large if her daughter Danielle had lived. She feels compelled to go big.

“A switch flipped for me when she died and I really wanted to find a way to expand, rather than contract into shame. Which I think is a very understandable impulse when you lose a child.”