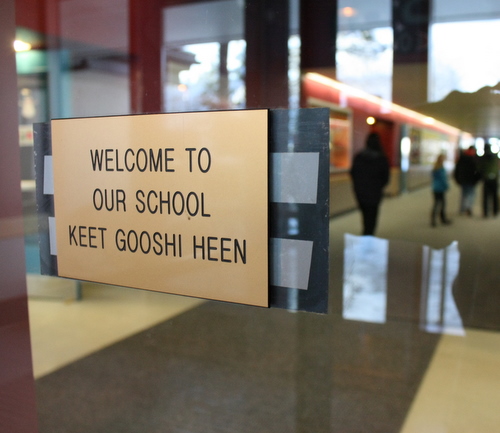 The city of Sitka announced today (08-29-16) that the Gavan Hill area, including Keet Gooshi Heen Elementary School, may be at risk for landslides.

Shannon & Wilson, a Seattle-based geotechnical firm, identified the landslide hazard zones during an assessment of the area. Although the final report isn’t complete, they notified the city verbally that Keet Gooshi Heen may be subject to moderate landslide risk.

In a press release issued today (Mon 8-29-16), city administrator Mark Gorman said the city wanted to get the information out to citizens “as quickly as possible.”

The city has contracted with Shannon & Wilson to develop a comprehensive report of the Gavan Hill area, including proposed mitigation if necessary. That report should be available to the public in December.

Mary Wegner, superintendent for the Sitka School District, said that safety of students and staff is a top priority. “We’re really anxious to see what the report has to say,” Wegner said over the phone today. “I’m not surprised to hear that when a school is close to a mountain, that there might be a potential risk of a landslide. I understand it’s a moderate risk. So, it’s not a high risk. It’s a moderate risk. And I really appreciate that the city is working hard to get more information, so that we can make appropriate evacuation plans and emergency preparedness plans.”

Wegner said the district is updating already existing emergency preparedness plans, in consultation with Sitka Police, Fire, and EMS departments. Wegner says it’s important for the district to not overreact, until more information is known.

Gorman said the city is also working with NOAA and other agencies to develop an early warning system for landslides, based on rainfall, wind speed, and other weather data.

Gorman talked about that project with KCAW earlier this month. “Could we have a warning system that says we anticipate a storm system that has all the variables in that results in a high probability of landslides in this area? ‘Please take caution.’ If there’s a public facility in this area, the city may say, ‘During this period that this warning, we’re going to have a rain day and this facility won’t be occupied.'”

The city anticipates the Gavan Hill report will be similar to the South Kramer report, published by Shannon & Wilson in February. The South Kramer analysis included a color-coded map of risk zones and recommendations for future development.