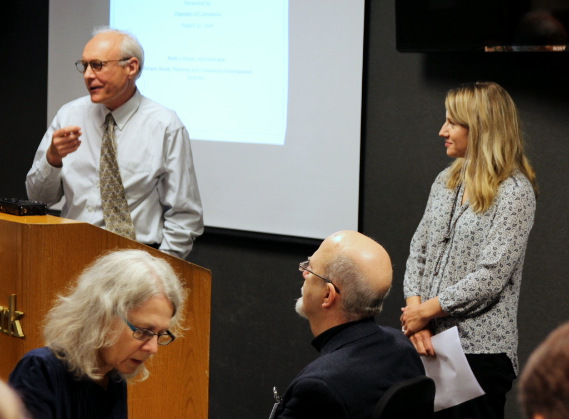 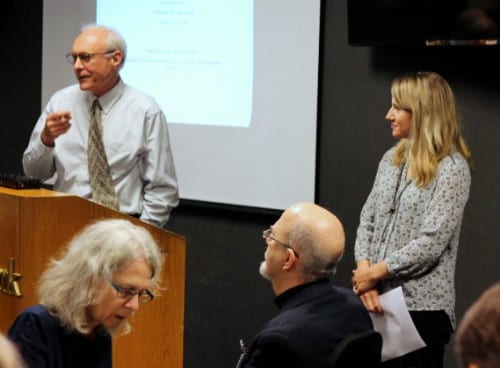 The City of Sitka is doing pretty well — for now. Top administration officials delivered their annual report to the Sitka Chamber of Commerce this week (8-31-16), describing a robust civic structure and active staff.

But that may change. During a question-and-answer period following the presentation, Sitka’s municipal administrator was candid about the community’s precarious financial situation in the wake of dramatic losses in state and federal funding.

Note: The City of Sitka will publish their first ever annual report on Tuesday, September 6 on their website.

The annual report was the first of its kind delivered by City Hall. Community development director Megan Bosak prepared the document, and it’s filled with — as she put it — things that are “going right” in Sitka. Like, how many people already work for local government, and how many want to.

“Our total of 156 employees. In this past fiscal year we had approximately 500 people apply for positions within the City and Borough of Sitka. 24 job descriptions were reviewed and updated…”

But Bosak’s upbeat report was tempered by the reality of Sitka’s financial situation, which administrator Mark Gorman carefully spelled out.

“We are anticipating as we start the budget process for next year — which begins July 1 of next year — about a $2.5-million operating deficit. Jay (Sweeney, Sitka finance director) has actually calculated in terms of what we’ve lost from state and federal resources as about $7-million. So the fact that we’re only looking at a $2.5-million reduction speaks volumes to the fact that we’ve been trying — and I think successfully — bending the curve of city government.”

Gorman explained that the city reduced real spending by over $1-million dollars this year, and reduced staff by 6 family-wage positions.

The Sitka assembly has proposed a partial remedy to the problem, by asking local voters to consider increasing the property tax cap by 30-percent, from 6- to 8-mills when they go to the polls this October.

Regardless of the outcome, Gorman felt it was important to put the question before voters.

“Whether that passes or not is going to be the will of the people, but I think the fact that it’s going before citizens is positive. Because I think the community is far more engaged about the fiscal realities facing both our community and the state than they have been in a long time.”

That Sitka won’t be able to balance its budget without raising revenue will be “a bitter pill to swallow,” Gorman said, “when so many people are already feeling financially stressed.”

The problem there, Gorman said, is that the bulk water industry is undeveloped. There isn’t enough demand for Sitka’s supply.

“I think if we literally gave our water away today we would not be able to find a large market for it.”

A more realistic solution to Sitka’s budget crisis involves selling not the water resource — but what is made from it: electricity. Over half of Sitka’s budget deficit can be attributed to debt service on the Blue Lake Hydroelectric expansion project.

Sitka bonded for the project in 2010, when — thanks to colder winters — the community consumed 112 million kilowatt hours of electricity. In 2015, Sitka just topped 105 million kWh.

This leaves Sitka with about 30-percent excess capacity in hydropower.

“Growing the utilization of the hydro is critically important to us. The irony when you talk about cold winters is that helps us, but that all comes out of your pockets. You’re paying for more electricity. The best result is to grow consumption.”

Growing consumption remains the challenge of the Sitka Economic Development Association and the Gary Paxton Industrial Park, and it’s unlikely that a major new electric consumer will roll in before the 2018 budget year begins on July 1.

Both are uncertain bets. One chamber member asked Gorman, “Do you believe that the Earth is warming?”

“My views on whether the Earth is warming or cooling are probably not going to change where the city needs to go. We had a very nice summer.”