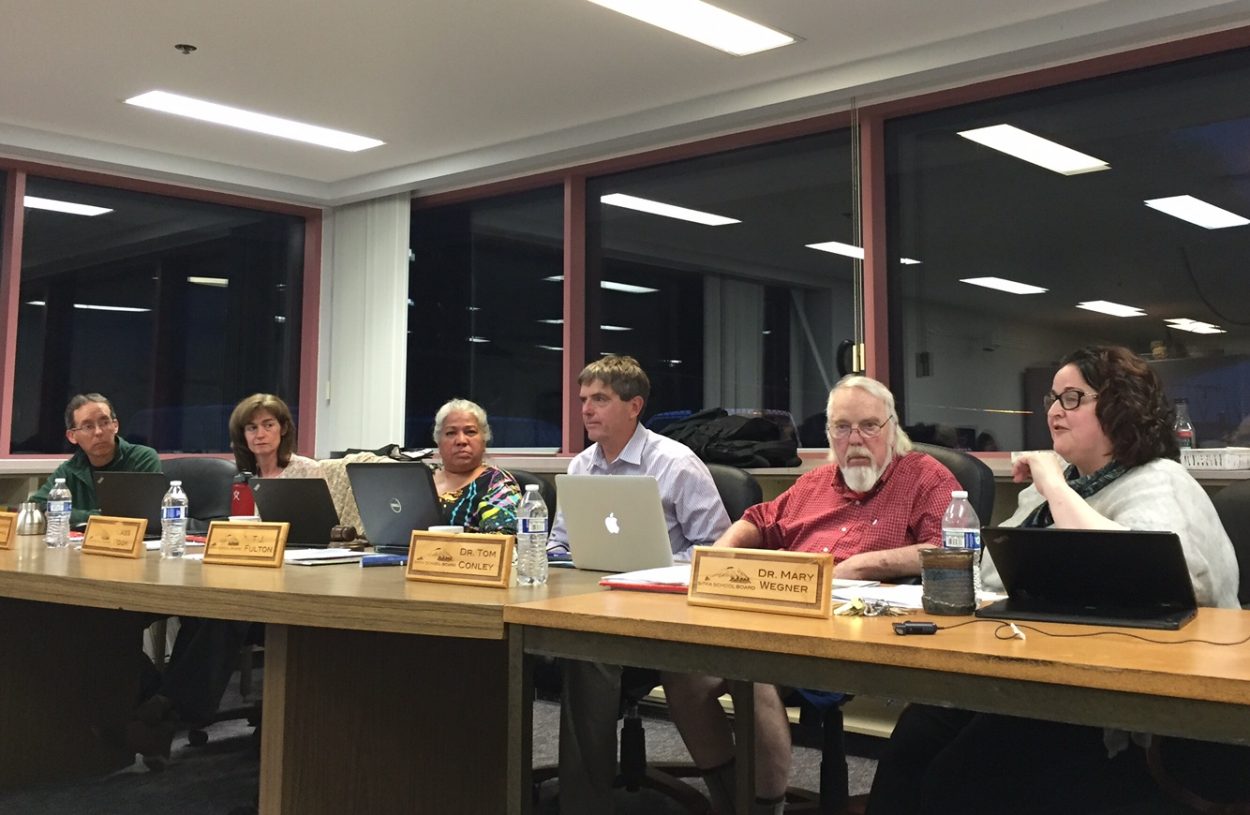 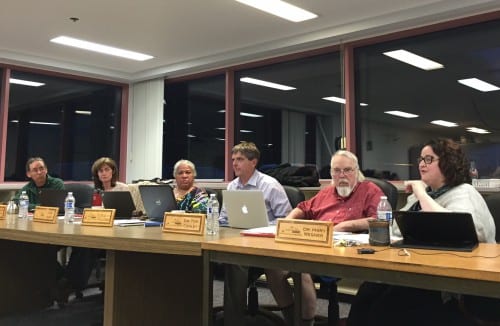 The Sitka School board held its first meeting of the year last Thursday (08-25-16), in which president Tim Fulton presented his resignation and the board voted to support raising the cap on the mill rate. (Emily Kwong/KCAW photo)

The Sitka School Board met last Thursday (09-25-156) for the first meeting of the school year. And at the top of their list was a resolution to support raising property taxes in Sitka. The October 4th ballot will ask voters to approve raising the cap by two mills.

Board member Tom Conley wrote the resolution, citing how the school district receives nearly 30% of its funding from the city (about $7 million dollars). Adjusting for inflation, Conley anticipated the district will ask for even more money next year – $7.4 million – and has a vested interest in getting the property tax increase passed.

“We need about $600,000 to $650,000 in the reserves to be solvent. It’s up to us to get in touch with the city and form a solid lobbying campaign with the district’s  citizens to try to get passage of the tax increase,” Conley told the board.

The board unanimously approved the resolution, with all members present.

The school district is leaning more heavily on local support because the stability of state money is dwindling. For instance, the district had already purchased some teaching materials when Governor Bill Walker announced several vetoes to education funding. The reductions to the base student allocation, school debt reimbursement, and transportation funding amounted to $170,000 less in state dollars for Sitka.

During her report, Superintendent Mary Wegner discussed the search for a new activities director. Sitka High Principal Lyle Sparrowgrove, who previously held the position, said it’s a challenging one to fill.

“We’ve had five ADs in five years. It’s just a demanding job. We’re housing 1300 to 1500 kids a year. Travel has gotten slower because of the connections. It’s just a time consumer. You’re meeting airplanes. In the four years I did the job, the 11 o’clock flight was on time four times,” Sparrowgrove reflected.

With school activities in full swing, Assistant Principal Sondra Lundvick and Sparrowgrove have absorbed the duties of that position. As they search for a full-time activities director, Wegner said the district will be redesigning the position to make it more sustainable.

Board President Tim Fulton also submitted his resignation to the board, which went into effect on September 1st. The board accepted, albeit reluctance. Board Member Cass Pook thanked Fulton for his service.

Pook: I have appreciated your leadership on the board. And the advocacy. I don’t know how you got involved with so many organizations and venues and going to meetings and still remained sane.

Fulton: It has been a good run. I always have tried to do the right thing for our students and hopefully that shows.

Fulton was elected to the Sitka school board in 2008 and appointed president in 2015. He will be moving his family to Idaho to take care of his parents, but intends to return to Sitka in the future.