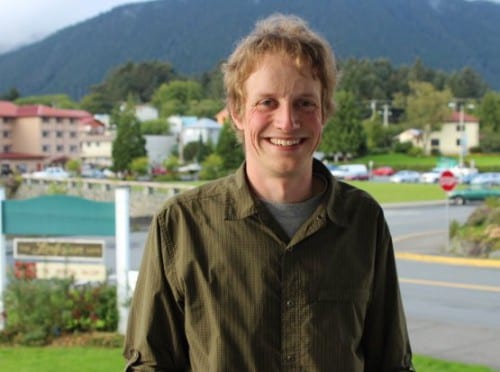 Whether he wins the mayor’s chair or not, Hunter will have served six years on the assembly by the time he wants to take a break in 2018. “It’s not always fun, but it is rewarding because you get to help Sitka, be part of the process, and ultimately make our town a better place.” (KCAW photo/Robert Woolsey)

The most senior member of the Sitka assembly would like to move up to mayor — but he really doesn’t seem all that “senior.”

Matt Hunter turned 34 this year. The four-year veteran of municipal politics considers himself to be the kind of thoughtful, respectful leader Sitka needs at the head of the assembly table.

Note: Profiles of all candidates for municipal office in Sitka, including school board, will be published as they are ready, between now and the municipal election on Tuesday, October 4.

The job is thankless and, relative to the hours required, mostly unpaid. But Hunter has not been worn down, and he believes he’s ready to serve as mayor.

“You can have very capable young people and very capable old people, and you can have less capable young people and less capable old people. It depends a lot on the person and their individual characteristics. I have the experience, having served on the assembly four years. When Mim (McConnell) leaves I’ll be the senior member by tenure. I have a good grasp of city government, the issues, Robert’s Rules, and I think I’m on respectful terms with just about everybody.”

Over the past year Hunter has served as Sitka’s deputy mayor, and he’s held the gavel often while Mayor Mim McConnell has been traveling. He’s a frequent voice at the table, and has demonstrated a willingness to hear people out.

“I really enjoy those conversations with people who want to debate with me on the issues, and I’ve changed my mind numerous times on things, and try to always go to meetings with an open mind. I make a sincere effort to put myself in others’ shoes and see the issue from how they’re seeing it. We’re a body of seven on the assembly, but we have over 9,000 constituents in Sitka, and seven is better than one, and 9,000 people with ideas is better than just seven with ideas, so it’s important to engage everyone.”

His view of the “big picture” in Sitka is one of sustainability. The state support that built and maintained harbors in his childhood, for instance, is gone. State grant support for roads and other infrastructure is also dried up.

Compensating for these losses has not been easy — not to mention expensive — but Hunter thinks Sitka will come out ahead in the long run.

“So we need to set ourselves up so that we can be the masters of our own destiny, instead of relying on the state entirely. That means paying more now, but paying less in the future. Because if we save money now we will be in a position to prosper in the future. And we’re not that far from sustainable rates in most of our funds. We’ve had massive rate increases — I recognize that, I see it on my utility bill! But we’re building capital in most of the (municipal enterprise) funds that will get us so much closer to where we need to be than we’ve been in the past decades.”

A big part of taking control of our own destiny was building the Blue Lake Hydro project. Hunter wasn’t on the assembly that decided to proceed with construction of the dam despite receiving bids 40-percent over the engineering estimate. But he thinks the investment was sound. He calls Blue Lake “an investment for the next hundred years for our town.”

“I have no doubt that the extra capacity from that dam is going to allow Sitka to grow in ways that we can’t through conservation alone. This next century is going to see us move toward everything from electric vehicles to more carbon-neutral energy sources. And Sitka’s going to be a leader because we have the capacity to be one.”

But it hasn’t been easy, or fun. Although the city cut $1-million in expenses this year, and decreased the workforce by six jobs, it’s expecting to come up short next year by $2-and-a-half million — with a big chunk of that debt payments on Blue Lake Hydro bonds. The assembly has crafted a ballot proposition raising the property tax cap in Sitka from 6- to 8-mills. While some consider it a reasonable way to replace absent state revenue, the assembly’s been subject to vocal criticism, at meetings, in the paper, and in social media.

“My skin is not quite as thick as I would like it to be. Things do get to me, and I’ve had some emails and calls that have taken me a while to get over. We are people too. We do live here. That being said, I try to rationalize. When people react emotionally, it generally stems from frustration or fear or some emotional response to helplessness because it is an expensive place to live in Sitka — and it’s getting more expensive. Everything from our food to our utilities. And now we’re asking for a property tax increase. I realize why people question the need for that.”

So even though Hunter wasn’t on the assembly that built the dam, he’s on the assembly trying to figure out how to pay for it — and he’d like to lead a way to the solution. If he doesn’t win the mayor’s chair, Hunter will retain his assembly seat for two more years. After that — win or lose — he says he’ll be ready for a break “to see if I can remember what it’s like not to have 30 or 40 hours of extra work to do each month in my evenings.”