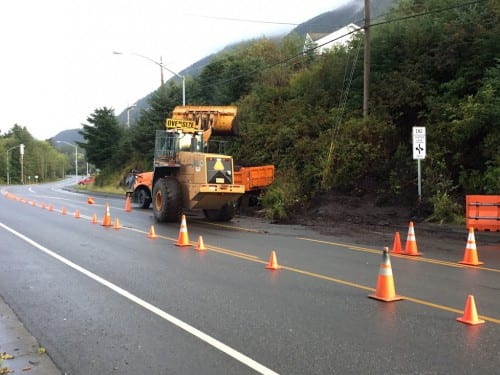 A small mudslide obstructed a portion of state highway in Sitka early Friday morning (9-16-16), but there was no other damage or injury from the event.

A motorist reported the slide in the 1800 block of Halibut Point Road to the Sitka Police Department at 2:20 AM. The caller told dispatch that mud and debris had crossed the sidewalk and “still appeared to be moving.”

Sitka fire chief Dave Miller responded to the scene and, although the slide looked small, he decided to take no chances.

“We called out everyone. There was an electric pole right next to it, so we called out the Electric Department. (Public Works director) Michael Harmon came out. And a couple of us went up and knocked on the two doors that are up at the top of the hill, and let them know something was happening. We weren’t really worried about it, but we wanted to make sure they knew about it.”

The embankment along this stretch of Halibut Point Road has been prone to slides before — some in very recent memory. In 2000, about a half-mile to the east, a mudslide destroyed a vacated shop building owned by the state Department of Transportation.

Miller admits that after last year’s fatalities on Kramer Avenue, the community “is sensitive to slides.” He says it informed his decision to mobilize significant city resources for what proved to be a relatively small event.

Miller says that after the mission was over at about 5 AM he stopped in across the street at Sea Mart for some breakfast, and met a couple of long-time residents.

“We talked briefly about the slides, and they’d been here a lot of years. And they said that area used to have little slides all the time.”

The National Weather Service recorded 1.13 inches of rain in Sitka on Thursday, almost an inch above normal for the day. By comparison — on August 18, 2015, the day of the Kramer Slide — Sitka recorded over 3 inches of rain, much of it in about 6 hours.