Kinnear: “I’ve always been a voice for the underdog.” 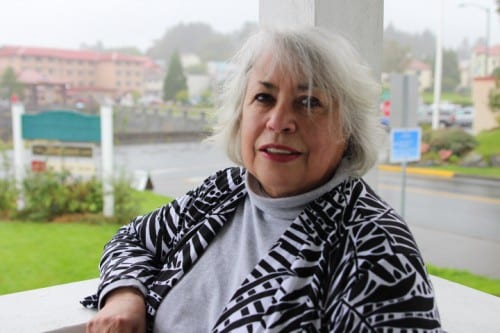 Evy Kinnear is one of five candidates running for two open seats on the Assembly. The municipal election is Tuesday, October 4, 2016. (Emily Kwong/KCAW photo)

Evy Kinnear  isn’t afraid of a challenge. In 2002, she moved from Los Angeles to co-found a bear rescue center at the site of Sitka’s former pulp mill. Once a pie in the sky idea, Fortress of the Bear is now a popular and profitable destination for visitors.

With the business in good hands, Kinnear has set her sights on a new challenge: the local economy. And to do that, she’s seeking one of two open seats this fall at the Assembly table.

Evy Kinnear remembers the first time she visited Sitka, with her now husband Les Kinnear. He took her out to a series of decommissioned clarification tanks, from Sitka’s old pulp mill, which he wanted to turn into pens for bear cubs.

“He talked to me about his vision and I thought it was brilliant. It will be an economic boon for the city. I couldn’t see where it would be a problem,” Kinnear recalled.

But there were problems. Opposition from locals. Bureaucracy. The first time they proposed the idea to ADF&G, the person on the phone hung up on them. “They thought we were nuts. Of course. I would too. But we had a plan and it never occurred to us to quit,” Kinnear said.

Fourteen years later, 30,000 people visit the Fortress every year. There are eight rescue bears and eight employees. Last year’s gross income was over $300,000. Other businesses in town – from tour companies to taxi services – profit off the Fortress too.

Kinnear says it’s this kind of out-of-box thinking that Sitka’s economy needs and if elected to the Assembly, she’d bring an entrepreneurial mindset to the table. “I believe in possibilities. I believe that ‘no’ is not an answer. I think you need people to support you and I want to be one of those people that supports ideas and businesses. Because without a strong economy, we have nothing,” Kinnear said.

Kinnear’s whole platform is centered around the economy – how to raise revenue and cut spending. That’s true of all the candidates this year. But Kinnear feels the Assembly needs more representation from business owners. She wants to bring a laser focus to ventures that utilize Sitka’s already-existing resources.

“Look at what Silver Bay [Seafoods] has done. They’re all over Alaska now in a very short period of time. I think growing a lot of our food is helpful. Why are we sending out garbage, like plastics? Why aren’t we developing businesses for the plastics that we’re sending out,” Kinnear said.

For as many ideas as Kinnear has, she has questions too. During our 40-minute interview, she wonders why the city doesn’t convert to electric vehicles, why they don’t negotiate with the barge companies to lower rates, and why there can’t be a hiring freeze at City Hall.

Kinnear know she doesn’t have all the information, but she’s skeptical about the scope of Sitka’s budget deficit. “Are we crying wolf? Is this real? Is this a way to keep the status quo alive? I don’t buy it. I don’t know that the sky is truly falling,” she said.

For this reason, Kinnear will be voting no on the ballot question to raise property taxes. And if further cuts need to be made, Kinnear wants to look within city hall. She said, “Let’s take hard looks at each department and say, “What can we outsource?” And so I want to take it back and take a hard look first at the top.”

Kinnear says she’s running for few reasons. For one, she has the time. Two former employees are returning to Fortress of the Bear and will take on many of her duties. She served three years on the board of the Sitka Convention and Visitors Board and reflecting on that experience, Kinnear considers serving on the Assembly a kind of calling.

“I’ve always been a voice for the underdog. I think life is service. It’s how I grew up. My parents were Holocaust survivors. Their lives were spared. So they spent a lot of what they did as giving back and helping others. I grew up with that thinking,” Kinnear explained.

Foremost in her mind are working families. Kinnear raised two children as a single mother and her stance on various issues comes from a place of wanting to protect those Sitkans who faced the same challenges she did.

“When you are in a survival mode and that’s all you’re doing is trying to figure out how that next paycheck is going to be spent and who is going to get paid. You do not care about issues that are facing a community. I want to make life easier for them,” she said.

Kinnear has worn a lot of hats in her life – from teacher, to sales person, to restaurant owner. And while Assembly member is something altogether new, Kinnear knows just how she wants to conduct herself. “I don’t do small talk.  I try to have my conversations and what I say be meaningful and hopefully feel touched and touch in return. That we speak from the heart,” she said.

All told, Kinnear wants people to feel comfortable bringing their big ideas – no matter how far fetched – before the Assembly.