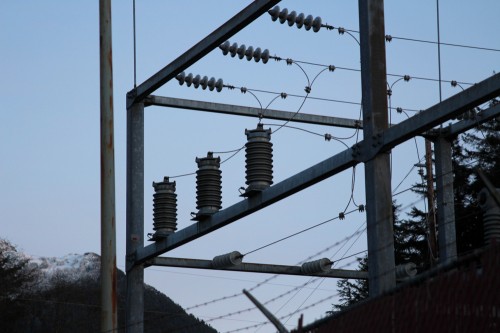 When the Sitka Assembly gathers tonight (09-27-16), they’ll hold a special meeting at 5 p.m. devoted entirely to the city’s electric utility: rate structures, revenue ideas, and how to keep up with repairs to the system while meeting bond obligations for the Blue Lake Dam. (Emily Kwong/KCAW)

When the Sitka Assembly gathers tonight (09-27-16), they’ll hold a special meeting at 5 p.m. devoted entirely to the city’s electric utility.

Bryan Bertacchi, Utility Director for the City and Borough of Sitka, will present a 10-year capital plan that identifies what parts of Sitka’s electric infrastructure are most in need of repair.

The plan was developed over an eight month period, with third party engineering studies. Among the most critical of Sitka’s energy needs, is the N-1 Project, which involves building a back-up system for the Marine Street Substation, and overhauling the Green Lake Power Plant.

The Marine Street Substation supplies power to 80% of Sitka customers and received a new transformer this year to mitigate the potential for a massive blackout. A back-up transformer is currently under construction.

The problem in the electric department is that there is not enough working capital -to fund all these projects – totaling $22 million – over the next 10 years, while also keeping up with bond payments on the Blue Lake Dam. Chief Administrative and Financial Officer Jay Sweeney projects the electric fund will have a deficit of $2 to $3 million dollars at the end of FY17.

The Assembly will vote on the ordinance and the capital plan on first reading tonight.

The meeting begins with a work session at 5 p.m. in room 229 at the University of Alaska Southeast. Raven Radio will join the regular meeting live in progress at 6 p.m. after Alaska News Nightly.

At their next meeting, on October 11th, the Assembly will hold their first meeting in their new chambers at Harrigan Centennial Hall and welcome new faces – including a new mayor – to the table.