Magnuson wants Sitka to ‘get a grip’ 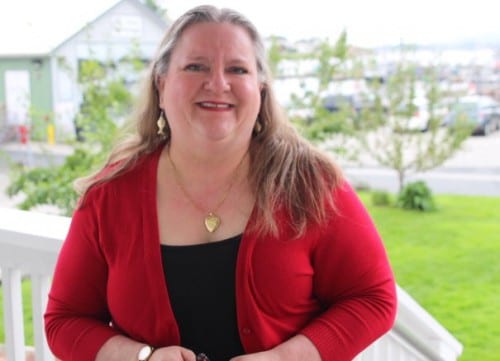 Although she co-owns a thriving restaurant now, Magnuson sympathizes with wage earners. “I haven’t taken a paycheck yet,” she says. (KCAW photo/Robert Woolsey)

Mary Magnuson thinks city spending needs to be brought under control. While she readily admits that she doesn’t have all the answers, this recently-successful businessperson wants to balance city expenses with existing revenues — even if it means cutting back services.

KCAW’s Robert Woolsey has this profile of one of Sitka’s three candidates for mayor.

It’s not all that surprising to see Mary Magnuson overseeing a shift at the Mean Queen, the new upscale pizza restaurant she opened with a partner last winter. Over the last 16 years you’ve seen her at the National Cemetery, in the harbor, at the laundromat, and in the state offices.

Magnuson has worn a lot of hats.

“I was thinking that it’s kind of interesting how many things I’ve done in town, from washing people’s clothes to burying them, to helping them get social services. And serving a lot of food. There’ve been a lot of interesting jobs, and it’s allowed me to meet a wide swath of people.”

Her diverse experience in Sitka made her a good choice for the Citizen’s Task force, the group assembled by city hall to review the community’s balance sheet, and propose a solution to the city’s budget crunch.

She dropped out prematurely to start her restaurant, but she saw enough to be critical of the process.

“I also felt like the Task Force was a bit city-driven. The presentations were such that would lead the committee to do things the same way they’ve always been done.”

Magnuson is flatly opposed to raising the property tax cap — the recommendation of the Task Force. She’d prefer to limit city government.

“If we can’t have all these services, then we can’t. If we don’t have the money, we can’t tax our way to prosperity.”

Magnuson’s husband, Frank, is a commercial salmon troller. They’ve felt the increases in moorage rates, and in utilities. Often, when a rate proposal is made, Sitka will be compared to other communities, and shown to be low relative to what residents in other towns pay for services.

Magnuson says this is where Sitka should be.

“And the idea that we have the lowest rate on this or that in Southeast — good! Good. That addresses affordability. Building some cottage homes is never going to do any good if their electric bill is $400 a month.”

Magnuson doesn’t want to lay off any city staff. She’d like to save money through attrition, by not replacing employees that leave. She’s boosterish about education, too, but is concerned about overspending on technology.

“I think our schools are doing a great job. I don’t know that we need to grow them. I don’t know that kindergarteners need white boards or things like that. I think we spend more than we have to in some areas, where I would like to see that funding go into teachers’ salaries and things that really affect the quality of the kids’ education.”

Magnuson would like to see the city dip into its savings and fix a “couple of economic blunders” — namely the overages on the Blue Lake Hydro expansion. But the reality of city finance can challenge even a conservative candidate. For example, the city has $7-and-a-half million dollars in hand to build a bulkhead dock at the industrial park, but all the bids came in significantly higher — just like the Blue Lake Dam.

The question for public officials is: Do we bite the bullet and build something identified as critical to the development of a marine service center, even though it’s over budget?

“So the answer is no. I would love to have a beautiful tile floor in my restaurant. I can’t afford it, so I’m not going to. I’m going to have the tile floor that I have. It’s just the same as what we do in our homes and our businesses: we do what we can afford. And then later, if that marine service center is making a bunch of money — and I don’t believe the city should run it, I believe it should be a private enterprise — and then grow it. It doesn’t have to be grand in the beginning.”

Magnuson has a conservative approach to government, yet she’s more empathetic than most candidates who take the anti-spending line.

Magnuson manages a prosperous business now, but she still sees the reality of Sitka through the eyes of a wage earner.

“I pay my people what should be a living wage. Not one of them lives alone. People that work 40 hours a week at a decent wage ought to be able to afford a small apartment, and pay their electric, and buy something beside Top Ramen at the grocery store.”

Although she’s running for mayor, this is Magnuson’s second bid for an assembly seat. Her campaign signs this time around read “Focused on the Future.”

That’s accurate enough, but she recently came up with an even better line.

“I said to somebody, What we really need to do is just get a grip. And he says, Well that should be your campaign slogan! We need to Get A Grip.”

And Magnuson will find out if voters want her to get a grip on the mayor’s gavel during the municipal election on October 4th.