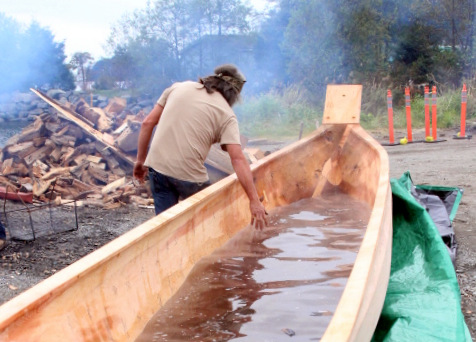 Tommy Joseph feels the warm water after the batch of lava rocks are taken out. (KCAW Photo/Emily Russell)

To transform a hollowed-out log into a dugout canoe requires more than expert carving — it requires steam, and lots of it. Earlier this week the skies over Eagle Beach in Sitka were filled with smoke and steam, as a carving team worked to transform a cedar dugout into an elegant, seaworthy canoe.

David Katzeek sings and drums alongside the nearly 30- foot long canoe and it’s five-man carving crew. The men stomp their feet to the beat. 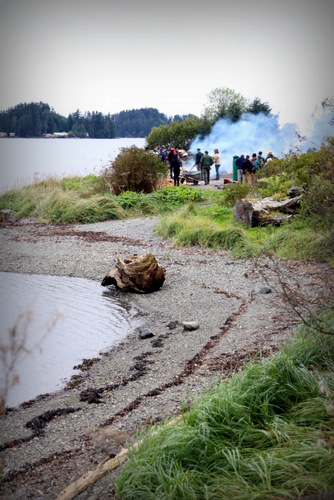 The steaming on Sitka’s Eagle Beach attracted friends and family of the carvers along with Park Service employees. (KCAW Photo/Emily Russell)

Katzeek is a Tlingit leader originally from Klukwan. He traveled down from Juneau for the canoe steaming. Tlingit, Haida, and Tsimshian people have carved canoes for generations. They fought wars and fished rivers from those canoes. Today, the vessel– it’s more of a symbol, but Katzeek says it’s still significant.

“A canoe is not just a vessel that goes over water,” Katzeek explains. “It represents a people’s  journey in life– the journey that we started thousands upon thousands of years ago, and we’re still here on that journey. We are not gone. We are not lost.”

After Katzeek offers an invocation, Joseph walks down to a water pump on the beach.

Fire hoses fill the canoe with about 10 inches of seawater. Two bonfires on either side heat up football-sized lava rocks. 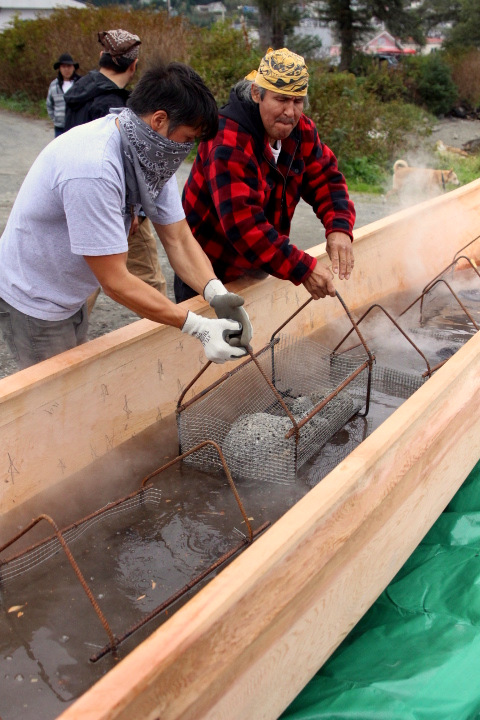 “Here in about an hour when these rocks are red hot we’ll start filling the baskets up and put them inside the canoe,” Joseph explains. “We have a big tarp to cover the whole thing.”

The idea, Joseph says, is to let the heat and pressure from the steam widen the canoe, making it sturdier.

“The boat, right now as it sits, it’s a beautiful boat, but it’s not seaworthy, it would be real tippy,” he says. “We’re going to get about 14 to 16 inches wider by steaming the boat.”

‘It softens the wood and makes it so that it will be a seaworthy boat,” Joseph adds. “It will be near impossible to flip over.”

The process is long, but the fires are warm and the mood is light among the friends and family and the park service staff. They’ve all gathered to watch. 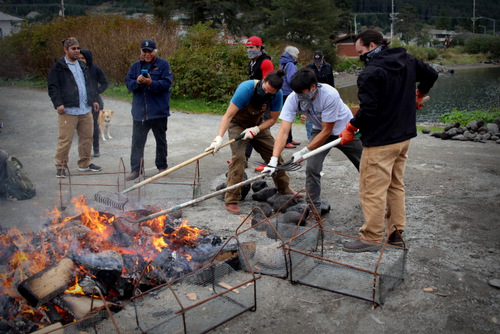 Carvers rake back the embers to reveal the heated lava rocks, which they’ll shovel into the metal baskets. (KCAW Photo/Emily Russell)

Every hour or so hour, the men rake away embers from the fire and shovel three or four hot rocks into metal baskets. Those baskets are then slowly placed inside the canoe.

Clouds of steam and smoke fill the air. A huge green tarp covers the canoe and the steam gets to work. Jerrod Galanin, one of the apprentice carvers, peeks inside.

“I’m just listening to see if it’s boiling still, if it’s active, if we need to replace the rocks. Put your ear in there and listen,” Galanin urges.

So, I do. It pops and fizzes like a freshly-poured glass of soda. When the fizzing dies down, it’s time to take the tarp off and put in a fresh batch of hot rocks. 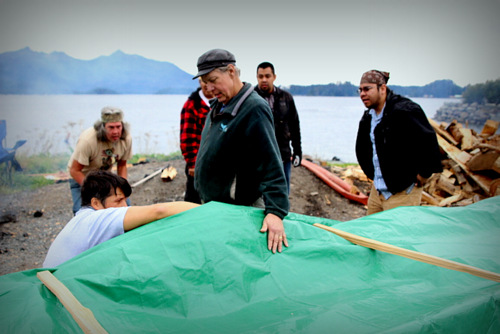 I’m standing next to Steve Brown. He’s the master carver Sealaska and the park brought up from Washington.

“There have been canoes we’ve made in Ketchikan, Wrangell, Glacier Bay, Hoonah, Klukwan,” Brown explains. “Did I say Wrangell already?”

Brown is not Alaska Native, but his knowledge and dedication to the craft have won him wide respect among Native people from the region. This knowledge can’t be passed on in books. Steaming a canoe is equal parts art and science.

“It will be significantly bigger than it was,” Brown explains. “The ends will be higher, the bottom will be flat– right now the bottom arches up– and the sides will not only bend outward, but they’ll also be down lower too. So, it radically changes shape.”

After an entire day of steaming, the canoe is 16 inches wider. 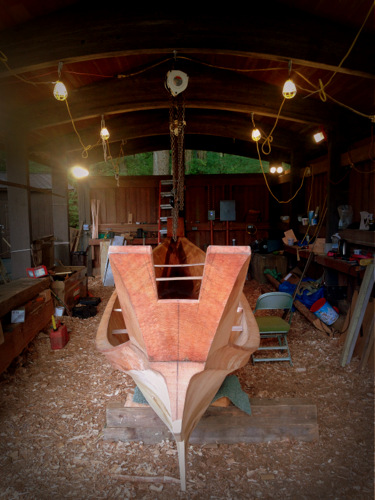 The canoe explained by more than 16 inches after the steaming. (KCAW Photo/Emily Russell)

Tlingit leader David Katzeek says the vessel isn’t the last thing that changes shape. He’s heard back from men after their first time on the water who say there’s something spiritual about being in a traditionally crafted canoe.

“They’ll come up teary eyed, with smiles on their face and saying, ‘Something happened to me when I was out there on the water with all the others. My life has changed. My life will never be the same.'”

After the canoe dries, the carving team with paint it red and black- traditional Tlingit and Haida colors. A dedication ceremony is planned for next spring.