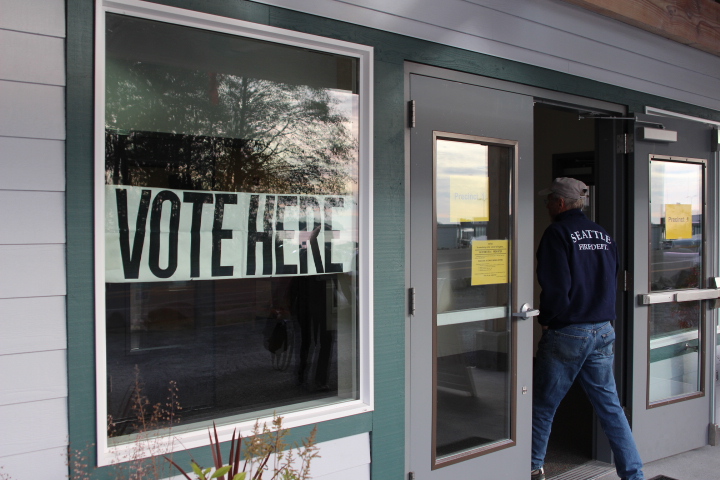 About 2,600 ballots were cast in 2016 municipal election, approximately 900 more than last year’s election, but 700 fewer than in 2005, when voters decided a total of 10 ballot questions. Voters rejected a Proposition to raise the cap on the mill rate to 8 mills. (Emily Kwong/KCAW photo)

While some of Sitka’s municipal races were fairly close, the question on the ballot was not. Proposition 1 proposed raising the cap on the mill rate from 6 to 8 mills in order to balance the city’s budget. The measure failed by a margin of 67 to 33 on election night (10-04-16), with 1353 Sitkans voting “No” and 677 Sitkans voting “Yes.”

With the failure of Proposition 1, the City of Sitka will have to find other ways to make ends meet. KCAW spoke with parties both inside and outside city hall for ideas about what the Assembly should do next.

You don’t have to go far to meet Sitkans who voted “No” on Proposition 1. I took a walk out the radio station down Lincoln Street and soon bumped into postman John Wiley, leaning out of his mail truck. “I don’t think it’s fair. A more fair tax would be a sales tax that’s going to hit everybody,” Wiley said.

Further down the block was Alene Henning. She served on the Citizens’ Task Force that unanimously recommended lifting the cap. Henning voted yes then, but no at the polls. The reason? “They need to look inside the city hall and see what they need to cut out,” Hening said. “Starting at the top.”

Megan Pasternak, who was walking to her car, considered a two mill increase in one year too extreme. She wasn’t confident the city would dedicate the money to the right areas. Instead, she’d prefer government look for ways to reduce spending. “Personally, when I’ve got money problems, I buckle down and cut something,” Pasternak said.

City Hall has already been thinking of ways to do that. The FY18 budget process will begin early this year, in November. They’re starting with a budget deficit of $3.5 million dollars, represented as $1 million in the Electric Fund and $2.5 million in the General Fund.

Those numbers could worsen funding through state and federal programs falls through. “Where we are at risk from the state is in revenue sharing (officially, the Community Revenue Sharing Program). We had over $600,000 this year, but I think that’s going to be at high risk next year. And [from the federal government], for Payment in Lieu of Taxes (PILT) and Secure Rural Schools.

Should those revenue sources disappear, Gorman said, Sitka’s deficit could balloon to $5 million. “The situation I believe is really quite critical. I’m optimistic we can get through it, but it’s going to require work on the part of the Assembly and the public,” he said.

Gorman also wonders how the city can better convey the depth of Sitka’s municipal budget crisis to the public.

In light of the property tax question failing, City Administrator Gorman plans to focus on what he calls the three R’s: Revenue, Reserves, and Reductions.

For revenue, he wants to the Assembly to find a revenue source that generates $1 million. For reductions, he’ll suggest downsizing local government by the same amount – $1 million. “The lion’s share of it will have to come out of the city, but I believe the school district and the hospital will have to share in those reductions to a certain degree.”

Gorman also foresees a reduction in the workforce by as many as six to seven positions, preferably through attrition rather than layoffs. “We did one lay off last year and it was painful. I’d like to avoid doing that,” Gorman said.

Next year’s budget already commits $900,000 for the Sitka School District and $1.5 million for the Public Works Department to maintain infrastructure.

When it comes to revenue, Sitka has money in a variety of funds. Some of those funds are protected, while others are not. Gorman will describe the parameters of tapping those funds at the next Assembly meeting on October 11th.

One idea of his is to make use of the Permanent Fund, which is protected by Sitka’s charter and currently holds $32 million dollars. Every year, the fund generates interest, which flows into the General Fund. But through a special election, Sitka could re-direct it towards the Electric Fund until it is self-sustaining.

“That would give the Electric Fund a steady subsidy into the future. We could wean off as consumption grown,” Gorman said. “This of course, deprives the general fund of that money. It’s a tough balance, these three R’s.

Key to Gorman is that the city properly convey the depth of its budget crisis. He doesn’t feel the city has always done a good job of doing that, which brought to mind a line from the movie Cool Hand Luke. The prison warden is mad at Paul Newman’s for saying something kind of flippant. He says, ‘What we have here is a failure to communicate.'”

“And he says it in a nice Southern drawl – ‘What we have here is a failure to communicate.’ We have a great struggle in terms of communicating our needs and our fiscal situation,”

That disconnect between what the city thinks it needs and what citizens think they needs is something all parties must to bridge to avoid the biggest R of all. That being a recession.

Marty McGee, the State Assessor, said that municipalities must be cautious to not cut city services, like schools or infrastructure, too deeply. Otherwise, Sitka could struggle to attract industry. I asked him for an example of this.

“Places like Detroit, Michigan or in Wisconsin…you look at what happened communities where they cut all the services. They realized, ‘There is no way we can attract jobs or industry to our community unless we provide services. So now we’re going to decide to fund it.” McGee considers property taxes the fairest source of revenue, especially when the rate is driven by the budget and not capped.