Passing of the gavel for new Sitka Assembly 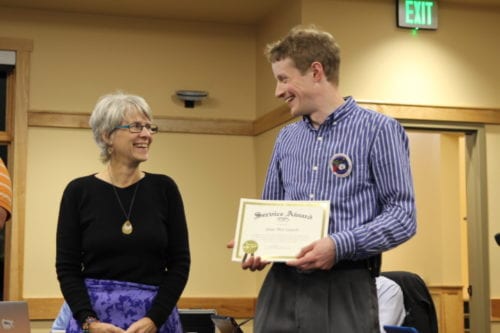 Outgoing Mim McConnell and incoming Mayor Matthew Hunter served four years together on the Sitka Assembly. He presented McConnell with a gavel and offered thanks for her seven years of service. (Emily Kwong/KCAW photo)

On Tuesday night (10-11-16), nearly everything changed about the Sitka Assembly. They swore in a new mayor: Matthew Hunter. New members: Kevin Knox and Aaron Bean. All in a new building. The Assembly chambers were revitalized in the remodel of Harrigan Centennial Hall.

Assemblyman Aaron Swanson was characteristically concise. “Do I have a time limit?,” he joked after stepping up to the microphone. He added, “I just want to thank the city of Sitka for allowing me to serve the last three years. It’s been a privilege to serve with these other members, so thank you.”

Mayor Mim McConnell, who was elected in 2012, said “One of the things Matt [Hunter] is going to discover as Mayor is that when you introduce yourself as the Mayor of Sitka, [other people] go, “Ohhhh Sitka!” Being Mayor of Sitka is really cool. If you want to be a mayor from somewhere, this is the place to be mayor from because this place has an excellent reputation worldwide, as far as I know,” McConnell said.

McConnell offered thanks to the city staff and encouraged the Assembly to support them. “Sitka, keep doing what you’re doing. You’re on the right path. Keep talking to each other and working out your differences and finding common ground,” McConnell said.

The Assembly also certified the results of last Tuesday’s municipal election (10-04-16) and swore in new members Kevin Knox and Aaron Bean. They appointed Swanson to take over Hunter’s seat for a one-year-term. Swanson was the third highest vote getter, followed by Alexander Allison and Evy Kinnear.

Passing of the Gavel as 2016 Assembly Begins (Slideshow)

On Tuesday night (10-11-16), the Sitka Assembly established a dedicated travel fund for student activities. The fund will draw upon state fees for marijuana licenses.

Each state fee costs $5000 and local communities receive half of that. With this fund, Assemblyman Steven Eisenbeisz says the marijuana industry could raise $8000 to $10,000 a year for activity travel sponsored by the Sitka School District. Right now, student travel is funded through city dollars and fundraising within the schools.

Aaron Bean, owner of the grow and retail operation Green Leaf Inc., objected to the ordinance, which had its second and final reading last night.

During persons to be heard, Bean talked about the importance of keeping marijuana out of young hands. “If we’re funding school programs and the kids that are traveling know where these funds come through, I would hate to encourage…it’s not direct advertising, but I feel like it’s priming if that makes sense. I wouldn’t be in favor of that as a business owner.”

Mim McConnell, who completed her final meeting as Sitka’s Mayor Tuesday night, said that while she understand where Bean was coming from, there is precedent. McConnell said, “To me, it’s kind of like the tobacco tax going to the hospital. We don’t give it to the hospital and people thinking, ‘Money going to the hospital? Let’s smoke more.’ So hopefully that’s not what people are thinking.”

The ordinance passed unanimously, on second and final reading.

Money for geotechnical and legal support

The Assembly appropriated $100,000 for geotechnical work with Shannon & Wilson, a firm assessing landslide risk and mitigation in Sitka. The firm previously conducted a study of the South Kramer area. The Assembly also appropriated an additional $150,000 for legal representation from outside attorney David Bruce. Individuals whose lives and property were impacted by the Kramer Avenue landslide have filed suit against the city. Both appropriations were approved on first reading.

FEMA will also be funding a two-year landslide mapping project in Sitka.

Bob Potrzuski was chosen as Deputy Mayor and Steven Eisenbeisz as Deputy-Vice Mayor. The 7-member body also divvied up liaison duties among the city’s boards, commissions, and committees.

Sitka Community Hospital Board: Steven Eisenbeisz, with Kevin Knox as an alternate

Investment Committee: Tristan Guevin, with Matt Hunter as an alternate

Planning Commission: Kevin Knox, with Aaron Bean as an alternate

Port and Harbors Commission: Matthew Hunter, with Bob Potrzuski as an alternate

Sitka Tribe of Alaska: Aaron Bean, with Bob Potrzuski as an alternate