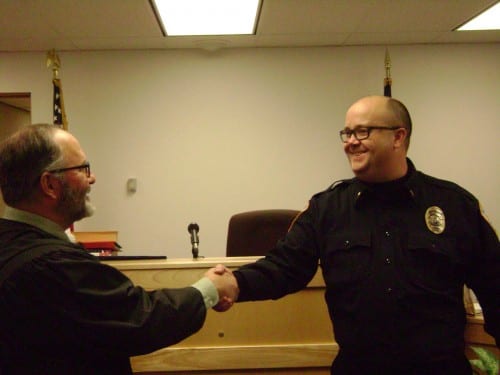 Ankerfelt joined the Sitka police force as a Lieutenant in June of 2014. Prior to coming to Sitka, he was the Deputy Police Chief of Brooklyn Park, Minnesota. Ankerfelt is also a graduate of the 221st Session of the FBI National Academy.

“The reason I became a police officer is that growing up I hated bullies. I couldn’t stand mean people or people being hurt, so that’s what drew me to the profession to begin with. And 26 years later, this is just all perfect. It’s been a great journey,” Ankerfelt said.

There are other personnel transitions within the department as well. Sargent Walt Smith will be the Lieutenant of Operations, managing the Patrol Division. Lieutenant Lance Ewers is now the Services Lieutenant, coordinating activities with the Sitka Fire Department, EMS, and Search and Rescue.

The Sitka Police Department has also changed its mission statement – with a focus on crime prevention – and identified four areas where it wants to improve. Ankerfelt said, “We’re going to be working really hard on community engagement. So being out in the community. Participating in events and actually hosting some of our own. In fact, we’re in the process of planning “coffee and donuts with a cop.” It will be bi-monthly event that we’ll probably have at Centennial Hall where people can come over and chat with us. We’re going to be focusing on problem solving, so when we do have a 911 call, we’re going to take a look at it and look at ways to prevent bad things from happening in the future.”

Ankerfelt added that the third and fourth areas for the focus are organization development and customer service. “We have a lot of fantastic staff here. We need to strengthen our skills. We’re also looking at, in the long term, improving our physical plant here. It’s not very effective. The building needs some work. And then just customer service. There’s nothing more powerful than anybody leaving an exchange with the police, feeling like it was a rewarding experience.”

Ankerfelt has been the Acting Police Chief since September, after Sheldon Schmitt took extended family medical leave on August 12th. In an e-mail to KCAW today, Gorman said that Schmitt voluntarily stepped down from the position. The press release further adds that Schmitt will serve as a Transition Advisor, providing grant development and management assistance.

Schmitt said the Police Department was fortunate to have Ankerfelt and that it’s been his privilege to serve the community. “It’s been kind of a surprise. I didn’t anticipate having to retire at this time, so it’s been a little bit of a surprise and shock, but on the other hand I’ve been extremely fortunate to be here. I’m proud of the work and proud of the relationships,” Schmitt said.

Schmitt joined the Sitka Police Department as an officer in 2002 and was promoted to Chief in February of 2005.