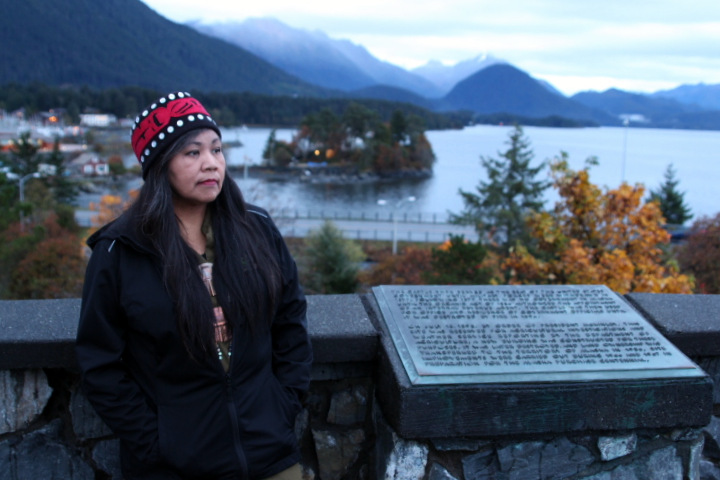 Paulette Moreno stands next to the plaque on Castle Hill explaining the 1867 transfer of Alaska from Russia to the United States. (Emily Russell/KCAW Photo)

Next year marks the 150th anniversary of the land transfer between Russia and the United States– a transfer that ultimately led to statehood for Alaska. In Sitka, planning for the holiday started months ago, but a holiday centered around colonialism has some people rethinking one of Sitka’s longest standing traditions.

To say Alaska Day in Sitka is like the Fourth of July everywhere else would be an understatement. It all begins during the week leading up to Alaska Day– there’s a festive barn dance and a fancy ball, a bonnet contest and a biathlon.

There are even people in 19th century period costumes to greet you at the airport. 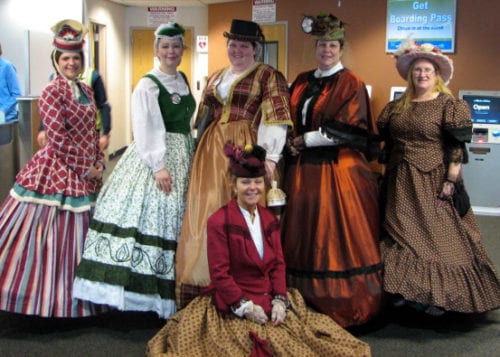 “We are the Alaska Day greeters, some of them, and some of them are down there behind the cannon, and we represent 1867 ladies,” explained Betty Conklin.

Betty Conklin sat atop a float in this year’s Alaska Day parade alongside other greeters. Shops close their doors and people flood the streets to honor October 18, 1867.

“This is where the transfer happened,” Conklin explained. “Sitka was, at one time, the capital of Alaska.”

Jeff Budd is Sitka’s sesquicentennial coordinator, a job funded in part by the city of Sitka and the state’s Office of History and Archaeology.

A challenge because of what the day itself represents. For some, it’s the day Alaska became a United States territory, but for others, the it’s the day Native land was transferred from one colonial power to another, without even a nod to the rights of its long-term inhabitants.

“I think Sitka is a pretty harmonious town, but I still think there’s an undercurrent of racism, probably both ways,” Budd said, “and it’s not too late to work on those things.”

To do that, Budd is in conversation with Tlingit clan leaders, elementary school teachers, and community members. He wants to unify the town by bringing in as many residents as possible and by making them face history head-on. One of the ways he’s trying to do that is with a one-act play.

Desmond is a playwright, actor, and documentary filmmaker based in Sitka.

His play centers around a stopover in Sitka made by Lady Jane Franklin, the wife of the Sir John Franklin, who vanished with his entire expedition searching for the Northwest Passage. 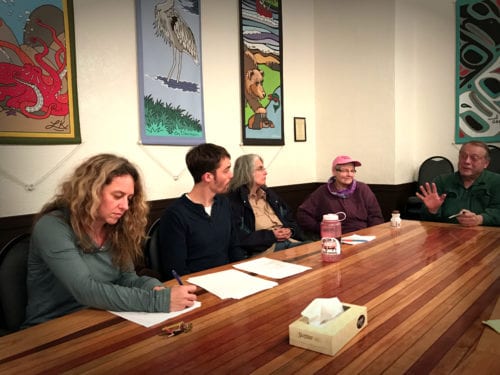 In one scene, a Tlingit man tries to explain what colonization is like to Lady Franklin, saying one dispicable act at a time may not, in itself, elicit anger.

“But if I drink your liquor, eat your meat, grope your wife, knock down your house, steal your sister, set fire to your brother’s bed, oust you from your village, poison your river…”

“You’d feel many things, and one of them, as you may or may not expect, is aggression.”

Desmond, who is non-Native, is forcing people to face an uncomfortable truth– that Tlingit people were treated badly, even brutally at times, when Sitka was colonized.

He wants to create a sense of empathy for his audience, because without it, Desmond said, “we really curb ourselves and our capacity to relate to the neighbors we so seek not to offend.”

But even 149 years later, Alaska Day festivities continue to offend. Arguably the most honored Alaska Day tradition in Sitka happens on Castle Hill. That’s where I met Paulette Moreno, who introduces herself with her Tlingit name.

Moreno climbed Castle Hill for this year’s reenactment. She was dressed in formal Tlingit regalia.

“And I carried with me a sign, a very simple handwritten sign, that just simply says  ‘Gunalchéesh Sheet’ka Kwaan for your care of Tlingit Aani for time immemorial.’” 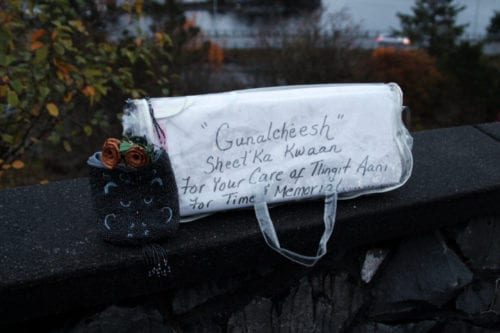 It’s a thank you note, of sorts. But Moreno said at least one of the women dressed as an Alaska Day greeter saw her sign as a threat.

“And I was just flabbergasted. I said, ‘What do you mean, a threat?’ And she said, ‘You were a threat last year and you could be this year.’”

Moreno said the reenactment only tells one side of the story, not acknowledging the presence of the Tlingit people, who took care of the land long before the Russians or Americans showed up.

I reached back out to Betty Conklin, one of the Alaska Day greeters, for an explanation.

“Like any pageant or ceremony, it takes pre planning and communication with the people who are doing it,” Conklin said. “If you don’t communicate and you don’t pre plan, you can’t expect to be meaningfully included, and that is all I will say about that.”

Conklin said if the Tlingit community wants to be involved in the transfer ceremony, they’ve got to show up at the meetings. But, with the right attitude, she said.

“If they come in just to stir the pot and point fingers and make accusations, well yeah, they should feel uncomfortable, because I’m going to take affront to that,” Conklin said.

It’s not trouble they want, says Paulette Moreno, but a seat at the table and a place in the transfer ceremony on Castle Hill. There’s no way of knowing what the next year will bring, but Moreno says there’s one thing she’s certain of.

“One hundred forty-nine years later when a Tlingit woman stands on Castle Hill during this year’s transfer ceremony and is perceived as a threat, we’ve got some work to do.”

And Moreno believes that work should start now, as Sitkans make plans for a 150th Alaska Day festival that everyone get behind.