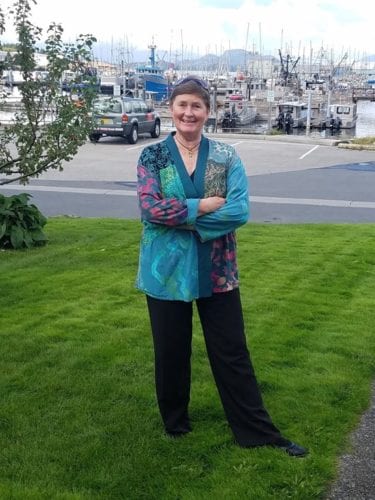 Learn more about the candidates and issues in the November 8 General Election at our 2016 Legislative Election Hub.

Hello, I’m Sheila Finkenbinder and I’d like to represent you in the legislature next year. I’m running for State House because we need to regain the effective representation and influence we had with representatives Peggy Wilson and Ben Grussendorf. Our current representative can talk the talk, but if there’s dysfunction in the legislature, he’s as much a part of it as anyone else, rather than being an innocent bystander.

Jonathan Kreiss-Tomkins is proud of his Native Languages bill, as he should be. But it was the only legislation that he got passed in four years in the House. It doesn’t compare well with almost any other legislator. He claims to have had a role in reducing oil tax credits, so it’s curious that when it came to passage of HB 247, the oil tax credit bill, he voted no on final passage. The governor signed that bill as a step in the right direction to cut our liability for future tax credits worth millions of dollars per year. He’s also taking credit for being part of a minority that had the power to leverage millions of dollars out of state savings to be spent in this year’s budget. The only problem was: When it came to approving the final vote on the operating budget, Jonathan voted no to supporting all state services. And in the end, the governor vetoed much of the additional spending, and also vetoed half of our PFD’s.

On the massive crime bill, SB 91, which I have been hearing about all over our district, Jonathan voted yes. Sex offenders love it; cops on the street hate it. He also sponsored a mega-fisheries bill that has a lot of fishermen and fisheries groups running in the other direction. The bill attracted no co-sponsors and received no committee hearings, but it’s a concern nonetheless.

I have no plans to be a career politician. I’ve already had a long and interesting career. My experience as an entrepreneur, a nonprofit founder and director, and as a legislative aide has provided me background and insight to tackle the big problems facing Alaska. I believe that decades of life experience help when it comes to seeing possibilities, evaluating complicated issues, and making critical decisions. We all learn from the mistakes we made in our younger years.

The top priority this year is balancing the state’s budget and closing the fiscal gap. I’m not afraid to make tough but fair decisions to help make that happen. And with decreased funding to communities, my attention to detail, critical thinking, and creative problem-solving skills will be key to resolving the complicated issues and needs of Southeast Alaska. We need a strong legislative team: A senator and two representatives working together. When elected your issues and concerns will have a strong voice with me and will be heard by the legislative body. I’m Sheila Finkenbinder and I’m respectfully asking for your vote for State House.