The reluctant candidate makes a push for the legislature 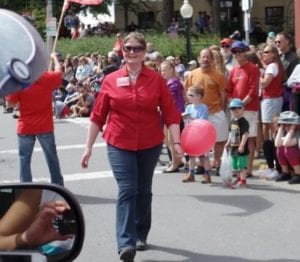 Finkenbinder marches in the 4th of July parade in Sitka. After a reluctant start, Finkenbinder says “I’m ready to be a legislator.” (sheila4statehouse photo)

Sheila Finkenbinder is decades older than the current representative for House District 35 — and she says that’s a good thing. Finkenbinder thinks Sitka, Petersburg, and other communities in the district would be better served by someone with life experience, who’s willing to work to solve Alaska’s extraordinary problems without distraction.

Sheila Finkenbinder sailed in 1990 from Anacortes, Washington, to Sitka in a trimaran with her husband and two children.

You might say alternative transportation was a family tradition. She and her husband, Ken, ran a small hardware store in Idaho. But they suffered from acute wanderlust.

Finkenbinder — We bought a 2-and-a-half ton amphibious truck and drove it to Texas — and then back up to Idaho 20 years later. Not too many people have a Duck.
KCAW — And did you ever drop this thing in the water along the way?
Finkenbinder — Oh he did. He drove it the length of Lake Mead.

Ken Finkenbinder was a Marine Corps veteran who died in 2010. Many Sitkans remember him as the handy go-to guy when you had an engine block to weld, or a gun that wasn’t working. He and Sheila co-taught hunter and firearm safety for nearly twenty-years total in Idaho and Sitka.

Sheila Finkenbinder worked a variety of jobs along the way. She founded and ran the nonprofit small-business incubator SitkaWorks. And recently she’s worked in retail at Spenard Builders Supply and the Alaska Raptor Rehabilitation Center.

Finkenbinder has been active in local Republican politics, and there were some who wondered why she didn’t make a bid for a seat in the legislature in 2012, when redistricting briefly united Sitka and Haines in the same district — rendering Haines representative Bill Thomas vulnerable to a challenge within the Republican party for his seat.

“I don’t think it occurred to us to run someone else. He wasn’t a perfect candidate, but then he had been in eight years and was head of (the) House Finance (Committee). That’s a pretty powerful position. He had the experience. Why would we run someone against him?”

Instead, it was a Sitka Democrat, Jonathan Kreiss-Tomkins, who nudged Thomas off his seat. Four years later, Finkenbinder says Republicans asked her to challenge Kreiss-Tomkins when no other candidate stepped forward.

“You’re really onstage and under pressure all the time. People are looking at everything you do, and judging everything you do, and wanting you to agree with them. And if you get elected, wanting you to do what they want. So that’s a lot of pressure and I didn’t necessarily want to do that — be under that kind of pressure. I enjoyed my career: I had a good time working in retail, helping people start small businesses — all the other things that I did — pounding nails, whatever! I had a good time. I wasn’t dying to be a politician.”

“I saw how much work she did, to be in leadership and serve on all those committees, and be chair of committees, and the responsibility. It’s not going to be a new experience for me.”

So far, the legislature has not found a clear path out of Alaska’s staggering budget crisis — the state is facing a deficit of $3.5 billion next year — and the governor, an independent, has taken the heat for significant vetoes — including a 50-percent reduction in the Permanent Fund Dividend this year.

Finkenbinder says she’s not going to propose any taxes if elected, but she’ll take a hard look at whatever the governor proposes. She thinks it’s time Alaskans took responsibility for their state.

“If a state income tax is based on what we pay through our federal taxes, then the more you make, the more you earn, the more you’re going to pay. And those people at the bottom who pay nothing will pay nothing. Some people think it would be more fair if it were just an across-the-board percentage of your income, and everyone paid something in. After all, at this point we don’t help support our state at all.”

One idea Finkenbinder likes came to her by way of a Petersburg fisherman: A statewide fish box tax, much like the one in place in Sitka now, which would provide revenue, plus help account for all the sportfish taken out of state.

Finkenbinder says it’s important to tackle the state’s problems one at a time — without distraction into frivolous issues. If she makes it to the legislature, she hopes her colleagues feel the same way. She says she’s the type of person who goes early and stays late until a job is done.

“I know it’s going to be tough, but again, I didn’t just fall off the turnip truck yesterday. I’ve been through decades of life and tough times and human beings are going to get us through it. We’ll just take one bite at a time. We’ll do what we can do, recognizing that we can’t fix it all immediately, and it is going to hurt, and we are burning up savings. But we’ll find out who’s tough enough and loves Alaska and stays. And I think a lot of us will.”

Finkenbinder understands that not everyone will go away happy from the legislature next year. There are only 90 days in the regular session, and some of these issues will take time. Even though she doesn’t consider herself a politician she says she’s ready to be a legislator.

Because not too many people have a Duck.