Democrat Jonathan Kreiss-Tomkins has won his third term in the state House of Representatives. Voters in Sitka, Petersburg and most Southeast villages gave him a 60-40 victory over Republican challenger Sheila Finkenbinder.

Kreiss-Tomkins said he felt optimistic about his re-election chances. But he didn’t want to be overconfident.

“I work really hard and I do my job well and that record, I think, will be ultimately be reflected in elections,” he said.

His first race was his tightest. In 2012, he beat incumbent Republican Bill Thomas of Haines by only about three dozen votes.

He did better two years later, defeating Petersburg Republican Steven Samuelson by a 60-40 margin. It was about the same this time around. 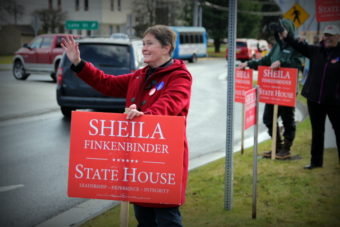 Finkenbinder, his opponent, said she thought she’d do better than she did.

“I had a lot of positive feedback from people who were supporting me. And I was more hopeful than it turned out,” she said.

Finkenbinder campaigned as a candidate who would join a Republican-led House majority, giving her more strength than the incumbent.

And Kreiss-Tomkins has been in the minority for the past four years, which limited his political clout. But a new majority coalition of Democrats, Republicans and independents has formed and he will play a stronger role.

The Sitka Democrat said he doesn’t have a specific to-do list — because he’s a generalist.

“I guess my interest is good ideas – and good ideas of every kind. That might seem like a non-answer. But if I were to look at the bills I’ve introduced over the past four years they’re really kind of A to Z,” he said.

This was Finkenbinder’s first run for public office, but she wasn’t a political newcomer.

She worked as a legislative aide to Rep. Peggy Wilson, a Wrangell Republican whose district used to include Sitka and Petersburg.

She also ran the Greater Sitka Chamber of Commerce and was active in the city’s Republican Party organization. 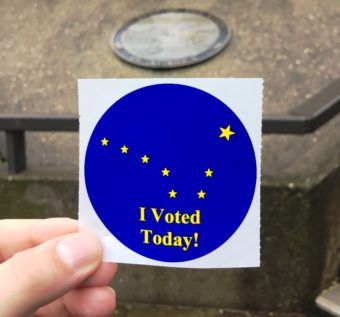 But the future? She’s not sure whether she’ll run again.

“I’m really not ready to answer that at this point. I’m not sure where my life will take me in the next two years. That’s a lot of time,” she said.

“You can’t just raise taxes and take in each others’ laundry. You have to have an economy,” she said.

She said that should include continued oil development. But there should be a wider focus.

“We need to encourage timber, fisheries, mining, sea otter (products), seaweed. Whatever it is, we need to develop our resources and grow the economy,” she said.

Kreiss-Tomkins said he too wants to create jobs. But they might not be in the same professions.

“I’ve been particularly focused on new small-business entrepreneurship as well as fisheries and maximizing the value of the Alaska fisheries for Alaskans. But that interest extends to all sectors of our resource economy,” he said.

As in all elections, questioned and absentee ballots must still be counted. But that won’t change these results.