Land deal settled, floating processor to be built in Sitka 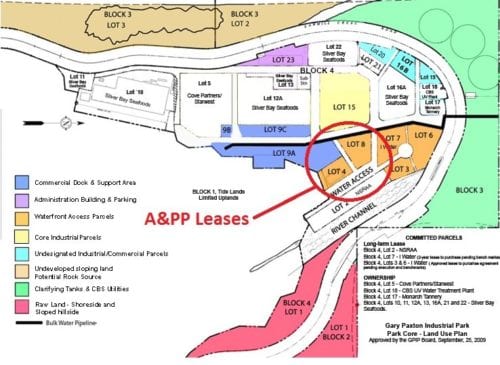 A&PP’s Glaab was frustrated with the lease process at GPIP. “I could have land in Seattle in two weeks,” he said. (KCAW image)

After more than a year of waiting on waterfront land to become available, a company will move ahead with plans to build a floating seafood processor in Sitka.

The Sitka assembly on Tuesday night granted a one-year lease to Alaska & Pacific Packing for a prime waterfront lot and building.

The land and building, known as Block 4, Lot 4, was previously leased by the small-ship cruise line The Boat Company.

Ordinarily, someone appearing at the park offering to pay $50,000 to lease a vacant property to build seafood processing equipment would be a slam dunk.

But there are other details that played into the assembly’s decision.

A&PP already has one existing lease for property at the park, Block 4, Lot 8, which it signed last November. Among the conditions of that lease were that A&PP put up a building and employ two full-time people at the site.

That hasn’t happened. Instead, A&PP head Pat Glaab told the assembly he redesigned the processing facility in town at Sitka Salmon Shares — at a site formerly owned by Big Blue.

“We actually did the testing that we wanted to do with fish through that plant — the 10,000 pound-per-day freezer — in that lease. So we did that last year, now we want to build the floating processor to take to Bristol Bay.”

Glaab told the assembly that he had concluded a deal for a 150-foot barge that very morning, and anticipated construction starting on January 15.

Glaab is a commercial seiner, but also the designer who built the state-of-the-art processing line at Silver Bay Seafoods in Sitka, and at some of the company’s other plants.

In 2014 Glaab and Silver Bay Seafoods — now rivals — submitted competing offers for leasing the remaining waterfront land at Sitka’s industrial park. Silver Bay wanted the waterfront access for a marine services center to be run in partnership with another local business, Halibut Point Marine. So Glaab and A&PP agreed to lease an upland lot — Lot 8 — and put a building on it within two years.

Silver Bay subsequently withdrew its offer, creating the opportunity for Glaab to lease Lot 4, which he wanted all along.

The assembly was disposed toward giving Glaab the second lease, but member Steven Eisenbeisz still wanted to see some processing and employment.

He and Glaab had this exchange.

Eisenbeisz – Are milestones going to be hit, or are we just tying up land for the next year?
Glaab – So we did one year. So they both come up one year from now, and you can pull ‘em both back if you’re not happy with what you see. That’s the idea. In fairness, it took 14 months to even know if I could get on the land. By that time I had 4 months to build a plant. We started into it and realized we couldn’t do it.

“I think the whole point of this was to generate economic activity in the community and it seems like you’re doing a great job with that. To see design and fabrication happening out there, and in town supporting other local businesses and Salmon Shares. I think that’s the kind of economic activity we want. Thank you for all your efforts and creating this kind of benefit for our community.”

The assembly voted unanimously to approve the 1-year lease with Alaska & Pacific Packing.