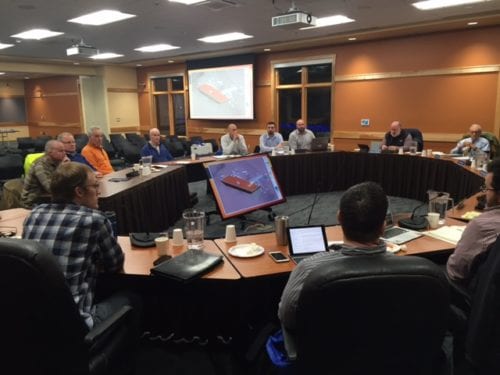 Plans to build a multi-purpose dock at Sealing Cove Business Center are in motion. The Assembly had several questions about the design for the GPIP board during their work session Tuesday night (11-22-16). (Emily Kwong/KCAW photo)

On Tuesday (11-22-16), the Sitka Assembly held a joint work session with the Gary Paxton Industrial Park Board to review design plans for a multi-purpose dock.

The dock, budgeted for $7.5 million, will be paid for with state grant money and have a 50-year lifespan. The Assembly appropriated an additional quarter million dollars for contingency purposes.

To build the dock, the GPIP  board opted for a “design-build” process, where the contractor – Turnagain Marine Construction – is responsible for all the work. City Administrator Mark Gorman recently signed the contract.

The project is moving ahead at full steam, set to be complete next fall. But the Assembly had some pressing questions in the meantime. They asked about the legality of the bidding process, the lifespan of the gangway, the cost of insurance, and how much revenue the dock would generate.

GPIP Director Garry White estimated business at the dock would make $40,000 the first year and that a few customers have already expressed interest. Those include Silver Bay, two transportation companies, a marine salvage company, and several trollers for in-water boat work.

The dock will not feature a full service marine haul-out – something members of the public have sought for a decade. The Board says there’s space for it, but not the funding. White said that if private entities built a ramp on the north side, that could kickstart the haul-out.

Board member Charles Horan added that it’s an expensive enterprise. “To do a haul-out without a partner really wouldn’t be a good idea. And the ramp is like the first increment of presenting a facility that then may make it feasible for a wide variety of speculative users to come in and use a haul out. And most communities are going to ramps with using hydraulic haul outs,” he said.

In further appropriations, the Assembly will reimburse Sitka Community Hospital for $109,000 in equipment upgrades. They voted down transferring a general fund balance of $440,000 into the public infrastructure sinking fund. They want to hold onto that money for potential legal expenses related to the Kramer Avenue landslide.

The Assembly heard a report on the Visitors Services Contract, managed by the Greater Sitka Chamber of Commerce, which estimated a passenger count of $154,000 next year. The Assembly also awarded a marijuana license for Northern Lights Indoor Garden, located in the 1300 block of Halibut Point Road and doubles as a cultivation facility. Owned by Micah Miller and Mike Daly, this will be the second pot shop to get the local stamp of approval in Sitka.

During persons to be heard, Alene Henning shared her observation that drivers are not complying with the new cell phone ban and asked for better enforcement. “I don’t see accidents but very close to accidents and it isn’t just with cars, but with people walking, that I see this happening,” Henning said.

The Assembly did not discuss the hiring process for the new city administrator and plan to do so at a future meeting.