Sitka Trail Works to get $1.8 million for Cross Trail completion 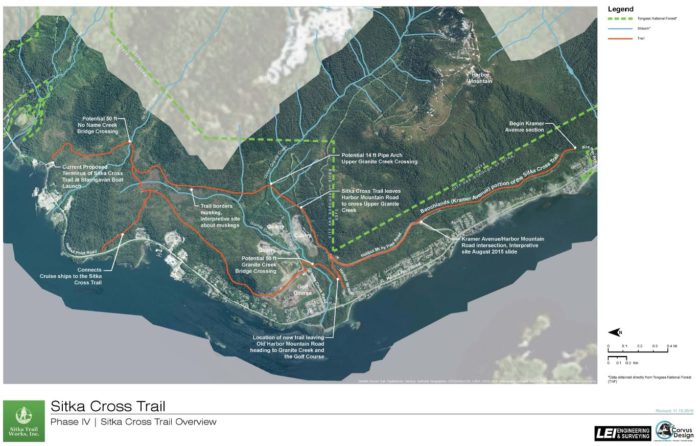 Sitka’s Cross Trail has won funding for an extension to the far end of the road system.  Sitka Trail Works announced last week that $1.8 million in federal funds have been approved for the final phase of the project – provided the next president signs the federal transportation bill.

Lynne Brandon is the executive director of Sitka Trail Works. She said this is a major milestone, not just for the project, but for the entire community.

“Anything that we can do to make Sitka a more liveable, healthy community benefits our overall economy.”

And for Brandon, that means building the final three miles of trail from Harbor Mountain to Starrigavan Beach, including a trailhead at the ferry terminal.

“We’re hoping that somebody wants to do a tour where they can just get people onto the trail and into town via bike,” Brandon said, “which I would think would be a really attractive option for tourists.”

The trail has always been about more than just attracting tourists and recreational users, though. Brandon explained it also has the capability to serve as an emergency route.

“If, for instance, Halibut Point Road had a [land] slide across it, or was taken out by a tsunami, it will be Herc[ulean] enough– strong enough– to support pickup trucks.”

In fact, in the last phase of the project, Brandon said bridges on the trail were built to withstand 16,000 pounds, or the weight of fully loaded dump truck.

“The Cross Trail is built like a logging road,” explained Brandon, “and has a pretty bomb-proof design to it so that it is uber-low maintenance.”

That helps cut down on upkeep costs for the city. There’s been both concern and confusion about just how much the city has contributed to the Cross Trail project, but according to Brandon, only about $49,000 has come from the city’s general fund.

Instead, federal and state grants have funded vast majority of the work. The $1.8 million grant just announced is from the Federal Access Lands Program, which is  part of the federal transportation bill set to pass in October of 2018. That’s the final hurdle, but Brandon is optimistic, especially with President-elect Donald Trump’s emphasis on infrastructure projects.

“So we’re hopeful that the federal transportation bill will have bipartisan support and make it through Congress without any problem.”

Until then, Brandon said, the focus is on planning. Sitka Trail Works has proposed two route options for the final three miles of trail. The first follows Harbor Mountain Road and crosses Upper Granite Creek. The other is closer to shore, running along the golf course and parallel to Halibut Point Road. Both options end at Starrigavan Boat Launch.

In partnership with the City and Borough of Sitka, Sitka Trail Works is hosting a public meeting and asking for input Tuesday evening (11-29-16) at Harrigan Centennial Hall from 5:30 to 7 pm.

Written comments may be mailed to Sitka Trail Works at 801 Halibut Point Rd., Sitka, AK 99835. The deadline for comments is December 14.