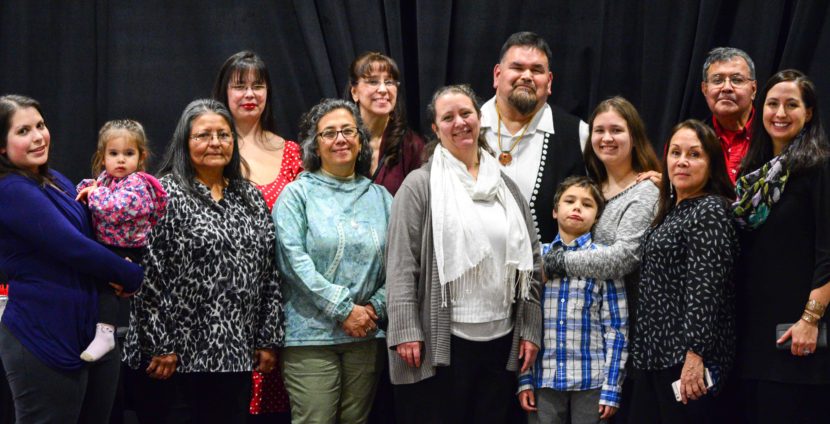 Alfie Price, sixth from the right, poses with family and friends after he was honored as a language warrior during a Nov. 22, 2016, awards ceremony. (Photo courtesy Central Council of Tlingit and Haida Indian Tribes of Alaska)

What makes a modern warrior? According to Southeast Alaska’s largest tribal organization, it’s someone who fights to preserve subsistence rights or Native languages. And it’s those who work for clean water or care for other people’s children.

But when he accepted an award naming him a Warrior for Protecting our Languages, he spoke in Eyak, a Prince William Sound Native language that’s considered extinct.

“I just wanted this room full of people to hear a few words of Eyak tonight,” he said. 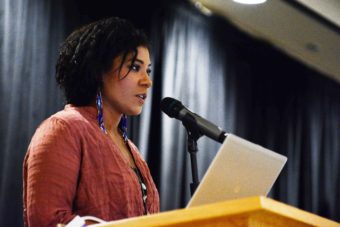 Miciana Hutcherson speaks after being named Warrior for Protecting Our Sacred Lands and Waters at a recent ceremony. (Photo courtesy CCTHITA)

Price is one of four people or families named as modern warriors by the Central Council of Tlingit and Haida Indian Tribes of Alaska during a recent celebration in Juneau.

Price, who is also Tlingit, talked about the process of learning the language of his Tsimshian ancestors.

“An unexpected side effect of learning Sm’algyax especially is I feel my own healing. The hurts and the things that made me bitter in my life are falling away. They’re becoming light on my shoulders” he said.

At the ceremony, Miciana Hutcherson was named Warrior for Protecting Our Sacred Lands and Waters.

Hutcherson is an activist who joined the Standing Rock Sioux protesting construction of the Dakota Access Pipeline. She said the campaign’s motto, “Water is Life,” is also important in her Tlingit homeland.

That includes protecting transboundary rivers from industrial development on the Canadian side of the border.

“We’re standing up for our inherent rights in a way that we’ve never seen before. We’re giving our kids and future generations something to be proud of and ensuring that we’ll leave something behind tangible for them to hold onto and that’s each other” she said.

Martin, a former logger, stressed the importance of secondary schooling. 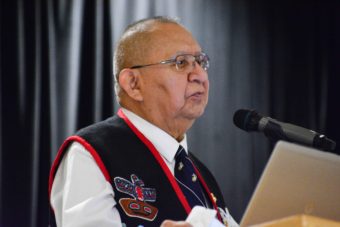 Veronica and Mike Hoyle were named Warriors for Caring for Our Children.

Surrounded by his large family, Mike Hoyle talked about fostering kids and taking responsibility to raise them.

“We never had any thoughts of adopting. We just wanted to do the right thing, when people need a place to sleep. You just look out for your family” he said.

The honors were presented at a Nov. 22 Native American Heritage Month Celebration. Organizers said those recognized represented many other tribal citizens who also go above and beyond to advocate, protest and protect.

Watch the celebration program, which begins about 48 minutes into the video.