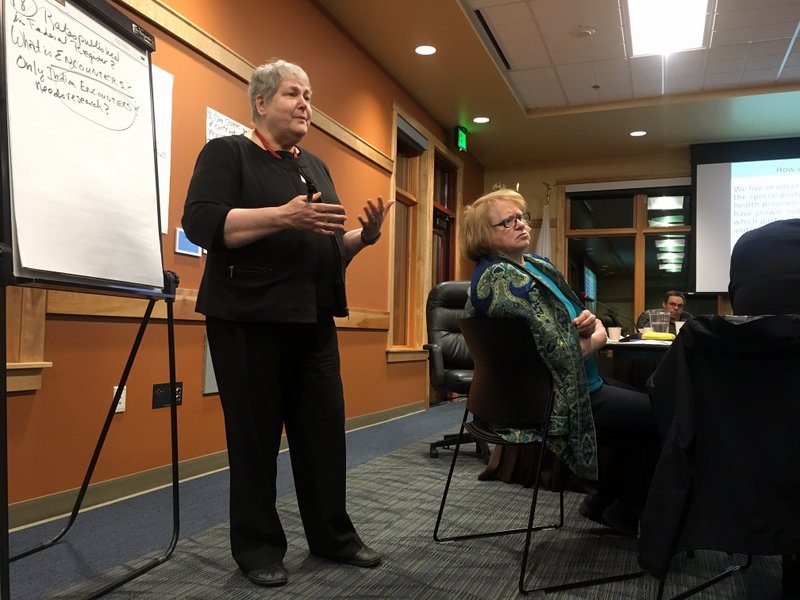 Former Health and Social Services Commissioner Myra Munson explains that, in order to preserve “advantages” that SEARHC has through its compact with the Indian Health Service, SEARHC must have control over any consolidation of services with Sitka Community Hospital. SCH board member Connie Sipe looks on. (KCAW photo/Robert Woolsey)

An expert in tribal law and health care says it would be possible for Sitka Community Hospital and the Southeast Alaska Regional Health Consortium to combine operations, but control over the organization would primarily rest with SEARHC.

Attorney, and former Health and Social Services commissioner Myra Munson offered her views Tuesday night (11-28-16) before a roomful of health care providers at a joint work session of the Sitka Hospital Board and the Sitka Assembly.

The Sitka Hospital Board will review a draft, non-binding letter of intent to consolidate services with SEARHC at its next board meeting, 6 PM Thursday December 1, in the lower-level hospital classroom. You can find the agenda — including the letter of intent — here.

Former commissioner Munson spoke for an hour and 15 minutes on the background of federal law which created the modern Indian Health Service.

She went as far back as the 1921 Snyder Act, when Congress appropriated funding for the “relief of distress and the conservation of health” of Native Americans.

Though a first-rate law school lecture, the three dozen local officials and health care staff seemed frustrated given the question on the table: Would it be possible for SEARHC and Sitka’s local hospital to integrate operations?

“You can’t get the answer to some of what you’re asking without appreciating some of the background to the existence of SEARHC and the other programs, because they really are bound together.”

But her experience working with the public in the cabinet of Gov. Steve Cowper shown through. It helps to tackle difficult issues with a little humor.

“I’m the one with the mic, so you’re sorta stuck with me.”

In a nutshell, Munson explained that the tribal health care system in Alaska is the product of nearly a century of lawmaking — several major acts which have all served to enhance healthcare to Native Americans, and never to diminish it.

That, she suggested, was the crux of the issue. No consolidation of the two organization would be possible if it impaired the current level of care to Native Americans.

“The only limitations are: There can be no diminution of services to Indians. So they have to be able to provide the same level of care. That doesn’t mean that Alaska Natives always get the first appointment. What it means is that everyone’s getting an appointment on the same basis.”

The question of patient preference was on the minds of many in the audience, most of whom were staff members of the two hospitals. That and Native hiring preference, charity care, malpractice, wait times for care, and the largest question for many: Would SEARHC require majority control over any combined organization?

“I’m not prepared to give an opinion about whether it’s a 51-49. It’s fact-specific. 51-percent of what? Is it 51-percent of control? Of billing? There are lots of variations. The bottom line, I will tell you, is that whatever SEARHC does to get these advantages must be done through SEARHC’s agreement with the Indian Health Service. Through its compact and funding agreement.”

But she eventually honed her answer to this:

“Ultimately SEARHC will have to have control. A certain measure of control. How much it can give up to others? I think there are lots of options. Lots of ways to structure something and it really is about describing the interest, and then thinking through what the options are.”

Sitka Hospital Board chair Bryan Bertacchi told Munson that ceding control, among other issues like Native hiring preference, had been described as “fatal flaws” in any potential relationship between the two organizations.

Munson urged board members to broaden their thinking.

“If you can step away from talking about fatal flaws and talk about what is the interest we’re trying to achieve, I wager virtually every interest can be satisfied within an arrangement.”

Munson made it clear that her role was not to tell the room how that arrangement should be structured — only that it was possible, and with precedent. She pointed to the local hospital in Nome which was purchased by the Norton Sound Health Corporation in 1976.

Munson couldn’t address one question though, posed by former SEARHC administrator Pat Alexander, who wanted to know the wishes of SEARCH’s beneficiaries — the Alaska Native population it serves — and why things were happening so fast.

“It feels like Sitka Community Hospital and SEARHC have been on one blind date,” Alexander said, “and now they want to have a baby.”