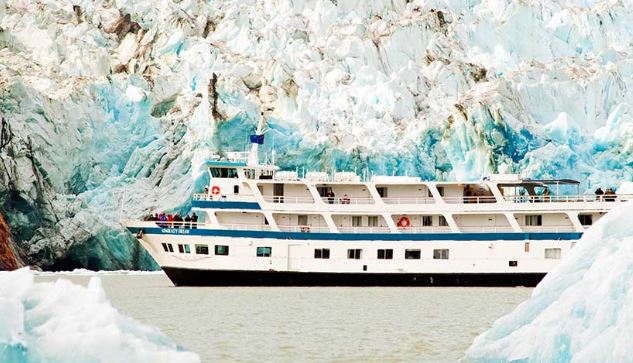 A Sitka-based tour company has become a dominant player in the small-ship cruise industry in Southeast Alaska.

Alaskan Dream Cruises was launched 5 years ago by Allen Marine, which has offered day trips and passenger lightering to the major cruise lines since 1970.

Marketing director Zak Kirkpatrick told the Sitka Chamber of Commerce this week (11-30-16) that Alaskan Dream now operates five small ships on itineraries ranging from a week to 11 days. But they all have one thing in common.

You’ll note that none of these itineraries will ever go, say Juneau to Ketchikan. It’s really important for Dave (CEO Allen) and the Allen family that everybody coming here touches Sitka. That’s extremely important to them. And it makes a lot of sense, as we all know in this room. Sitka has a lot to offer. In his letter this year Dave said, “Our itineraries are designed to ensure that you will enjoy an authentic and personal Alaskan experience. At the conclusion of each day you’ll feel that you’ve done much more than just travel through the Inside Passage. You will realize that you’ve witnessed the region through the lens of a resident. You will have experienced natural interactions with local peoples and indigenous cultures, and have walked the streets and gravel roads of local villages which rarely see outside visitors.”

Kirkpatrick said that there are now 17 small cruise ships from five different companies competing in the Southeast market, with a total capacity of about 1,200 — around half the passengers of a single large cruise ship. What’s more: there’s little overlap between the market for large- and small-ship cruising. Alaskan Dream sees no reason to disrespect the big players.

We have very, very close ties and relationships, and do a lot of business with large cruise lines. That’s Allen Marine’s whole model. That’s what we’ve done since 1970 when it started. We think that it would be misguided, truly, to disparage those large-ship lines because we’ve found that small ship cruising is not for everybody. Just like large-ship cruising is not for everybody. Some people want this educational enrichment, they want a Native village. Other people say, Hey, I’d like a large room, and to be able to go to the casino, or have more of the party life. So our saying is that Alaska has something for everybody. And something for the unique tastes and individual preferences of our guests. We always say, There’s no bad way to see Alaska.

Alaskan Dream’s five-ship fleet is second only to UnCruises, which operates six. Kirkpatrick fielded a question from an audience member about whether Alaska Dream would consider capitalizing on its success and serve other parts of Alaska.

He offered this anecdote from a recent trip to the Alaska Travel Industry Association conference.

When I was up at ATIA the mayor of Nome came up to me and said, I need to give a message to the Allen family: We want you in Nome! So all I can speak to the growth in other areas, whether it be south or north, is that options never seem to be off the table with the Allens. Right now we’ve found a great little niche doing what we know best in Southeast Alaska. It’s working pretty well and we’re filling boats. So that’s what I can say to that.

Former Allen Marine vice-president Rob Allen — now CEO of Sitka Community Hospital — speaking from the audience, offered the insight that every small-ship cruise line that wasn’t “well capitalized” had gone bankrupt, and that his family was aware of that risk.

Still, there are happy accidents. Rob Allen’s brother Dave, the current president of Alaskan Dream, reportedly increased his fleet’s capacity with the click of a button.

Dave also often gets asked what’s the game plan? Are there more ships? And the only thing I’ve heard him really say regarding that is, Please keep me off eBay! The story goes that he bid on that Chichagof Dream and thought he may not have got it, but ended up getting it.

Alaskan Dream Cruises served just under 2,000 passengers in its inaugural season in 2014. Last summer they nearly reached 3,000. Kirkpatrick said that early bookings — plus added sailings from the Chichagof Dream — would likely push their passenger count over 3,000 in 2017.