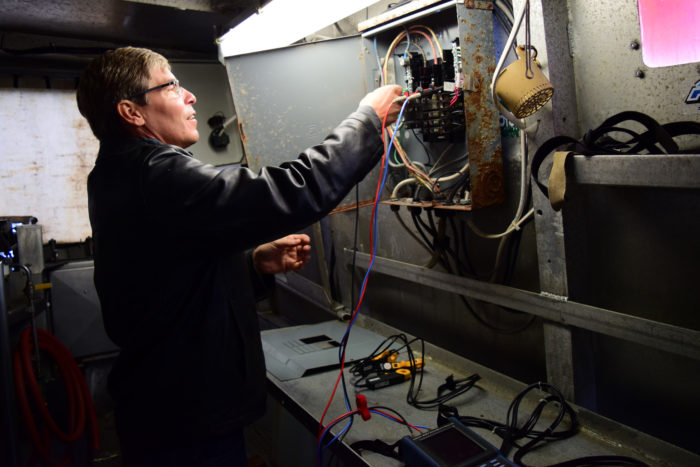 Commercial fishermen are largely at the whim of the seafood market. Prices can vary wildly, while operation costs stays the same — That is, until now. An energy audit aims to help Sitka’s fishermen increase their profit margins.

It’s a sunny morning in Sitka. Usually Steve Fish — yes, that is his real name — would be out on his boat the Kariel, trolling for salmon or longlining for black cod or halibut. But today, the 66-foot fishing vessel and its captain are parked in the harbor.

Fish has surrendered the Kariel to a swarm of engineers, who can’t help but ask about how his gear works. Fish explains.

“The fish hits the crucifier and then the winch, as it’s hauling the gear, pulls the hook out of the fish’s mouth.”

They’re all aboard the Kariel to conduct an energy audit of the vessel. Fish, along with 17 other fishermen in Sitka, volunteered for the audit.

For Fish and most others in the industry, each year those dollars and cents are spent at the pump. 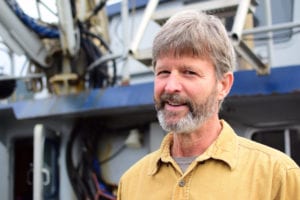 One obvious way to cut costs is with a more efficient engine, but Mike Gaffney says there are other, less expensive avenues as well. He’s an engineer based in Norfolk, Virginia and usually works on larger ships like cruise liners and Coast Guard cutters.

“But this is my first episode with fishing vessels, so that’s why I keep asking how the operations work,” explains Gaffney.

Gaffney was brought up to help with the Fishing Vessel Energy Efficiency Project. That’s a joint effort by the Alaska Longline Fishermen’s Association and the Alaska Fisheries Development Foundation aimed at energy and cost savings.

But to do that, Gaffney says they need a baseline of data: How much, say, a vessel like the Kariel uses without the upgrades.

“And of course there’s lots of room here to move around,” Gaffney jokes.

The space is tiny. Gaffney tucks himself up against the electric panel and runs wires between it and his power quality analyzer, or PQA, which resembles a clunky, oversized calculator. 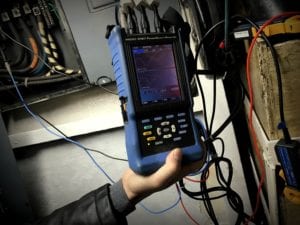 engineer Mike Gaffney uses a power quality analyzer to measure the energy use of the vessel’s lighting. (Emily Russell/KCAW).

He starts with the vessel’s lighting. It’s measuring amperage, voltage, and power factor, which together determine how much energy the lights actually use.

“So we’re going to measure what he’s currently drawing and see how long he actually keeps them on,” Gaffney says. “We’ll figure out what his annual cost is to operate these lights and see if it’s cost effective to switch to LEDs.”

Right now the vessel uses high pressure sodium lights, which Gaffney says have a long warm up period, so fishermen tend to just turn them on and leave them on.

“Also every time you cycle them on and off, it shortens the life of the bulb,” Gaffney adds.

That’s not the case for LEDs. There’s no warm up time and it doesn’t hurt to turn them on and off. And they’re brighter.

“If you put an LED lighting in this engine room, it’ll brighten it way up,” Gaffney says.

For fishermen, though, that’s not always a good thing. Some complain about the light being too blue, too harsh on the eyes. Another problem unique to fishermen especially in Alaska: LEDs don’t heat up the way other bulbs do, which means more ice buildup on outside lighting.

It’s the data but also these insights that make the project unique.

Chandler Kemp is an engineer based in Sitka. “I don’t know of anybody who is doing this type of work on fishing boats,” Kemp says.

He’s compiling all of Gaffney’s data and writing up reports for the 18 vessels that volunteered for the audit. Kemp says the end goal is an online tool for fishermen.

“It would be an online interface that people can go on to easily access the information we have collected and enter in a little bit of information about their boats, say the fisheries they participate in, the length, the engine size,” Kemp explains.

The tool, which Kemp expects will be released in 2017, will then generate ways to make the vessel more energy efficient, and for fishermen, that means more profitable.