Sitka students ask for classes in ‘being adults’ 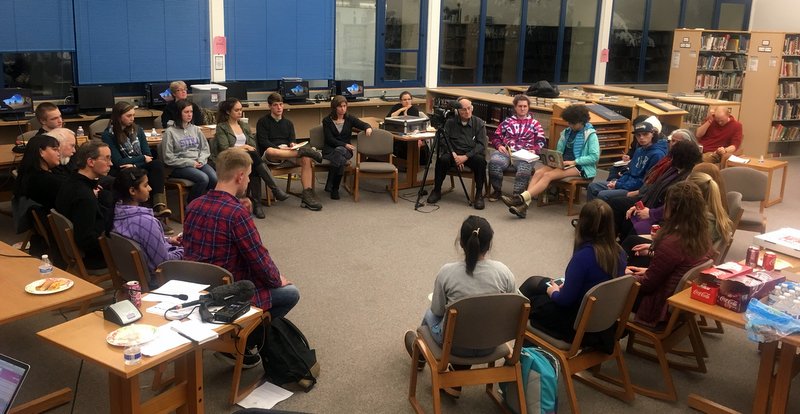 Sitka High students also were concerned about the Math program. Principal Lyle Sparrowgrove was willing to hear them out, “But the world’s not asking for the things I had as a kid. They’re asking for different things now.” (KCAW photo/Robert Woolsey)

Or rather, they want classes to teach them how to make sense of the adult world they are about to enter.

The Sitka Student Council requested electives in adulthood at a joint meeting with the Sitka School Board earlier this week (12-5-16).

When the Sitka School Board gets together with students, it feels a little like movie night without the movie. There’s pizza and Cherry Coke, and the conversation typically runs toward how to improve the school environment, like eliminating bullying, or adding Wi-Fi.

But this year was different. Students pitched for new courses, well outside of academics. This is senior Harry Hartzog.

“There are a lot of things that you don’t learn specifically in high school that are very important going in. We learn the basics of our taxes in American Government, but we don’t learn how they’re filed. We don’t know how to take out loans for house payments, or what’s acceptable market value, or how to learn any of that type of stuff.”

Hartzog said that there should be a way for students to learn these things from a variety of teachers — whatever their expertise. He suggested classes on changing the oil in your car, or changing a tire.

Junior Tyler Garrity transferred to Sitka High. She said her previous school gave lessons in how to write a check.

“That was because so many people in my class had no idea what to put on a check when you’re writing one. And that’s something that you do when you’re an adult. You write a check. And we also learned how to fill out job applications and write a resume — that kind of stuff. And it really prepared me when I turned 16 to be able to do all that, to prepare myself for a job interview. And I’d like to have a class here that taught me how to pay taxes, how to pay bills — do any of that stuff — because those are things you’re not taught. A lot of times they just leave it to the parents hoping the parents teach them and kind of hope for the best.”

The school board was receptive to the idea, but unlike installing Wi-Fi, may not have the resources to pull it off.

Superintendent Mary Wegner told the students that the district would likely take a cut of $250,000 from city government next year. The district is also down 24 students below budget, with 1,276 enrolled during the official count period during October.

She wants to involve students in advocacy for schools.

“I don’t think we’re going to be able to save enough money to get us out of huge deficit, right? So what we really need to do is make sure that what you value in your school experience from the time that you’re in kindergarten to now, and helping to advocate for how we can help prepare you to move forward into your future, is really an important voice that you have uniquely as students.”

In addition to asking for elective classes in being adults, student council members shared concerns with the board about the high school’s Core-Plus Math program, and requested something — though not as cool as Wi-Fi — that is definitely cool: Green water fountains that let you refill water bottles.