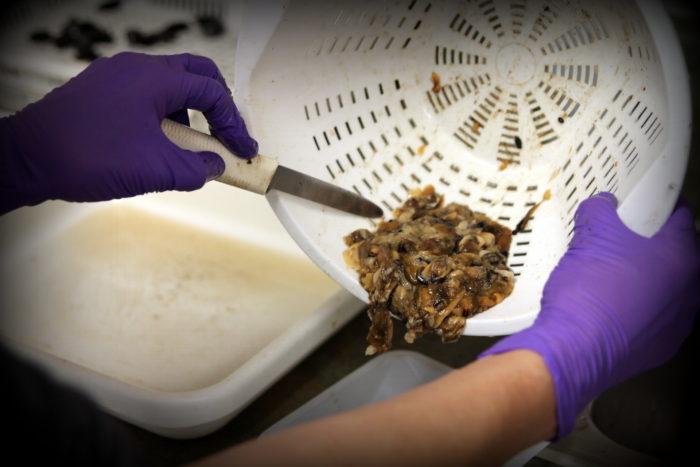 Shellfish is a staple in many homes throughout Southeast Alaska, but it also can be a hazard. A new lab in Sitka tests regularly for shellfish toxins and is now teaching more than a dozen tribes in the region to do the same.

Global warming could increase the level of toxins, so tribes are working fast to take the mystery out of what’s blooming on their shores.

Jen Hamblen has purple plastic gloves on and a long black apron. She’s shucking blue mussels, the kind you might find in a seafood restaurant.

“I love chowder. I must say, my appetite for raw shellfish has decreased since I began this position,” Hamblen admits.

Hamblen is a fisheries biologist for the Sitka Tribe of Alaska. She’s scrapes the meat off the shells into a little white bowl.

When she has at least 100 grams worth of blue mussel meat, she empties the bowl into a blender. She sets the timer for three minutes and turns the blender on high.

“The fancy word for that is ‘homogenization,’ but ‘shellfish smoothies’ is the other term we like to use,” Hamblen jokes. 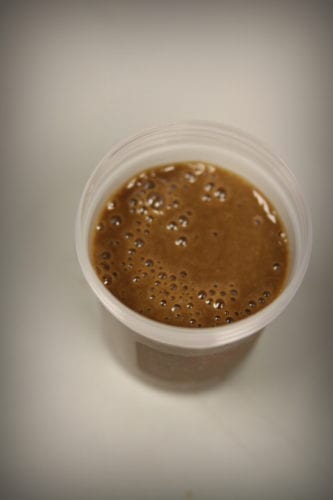 After 3 minutes of blending, the blue mussels are homogeneous. (Emily Russell/KCAW)

The Tribe started blending up shellfish and testing them in the lab because of the growing concern over Paralytic Shellfish Poisoning, or PSP. Toxic algae blooms can contaminate shellfish, causing the sometimes fatal illness.

“People want to know, ‘Can we go out? Is it safe or is it not?’ Because it is an easy subsistence resource to harvest here. There are shellfish everywhere.”

“When I showed up a year ago the lab was basically a bunch of boxes and I pretty much had to from there ordering the rest of supplies and getting the lab set up,” Jamros says.

It’s all set up and fully functioning now. That’s a good thing, since a study published last month reports that since 1997, the annual production of algae in the Arctic has risen by nearly 50 percent.

“Just like your garden– if you water it and it’s warm and sunny out and you give it fertilizer– everything does really well,” Whitehead says. “It’s the same with these vegetative cells in the marine system.”

That’s why their weekly tests are so important, Whitehead says. And now more than a dozen other tribes in the region are also testing for toxins, including communities like Wrangell and Ketchikan and Juneau and Yakutat and Hoonah, Whitehead explains. 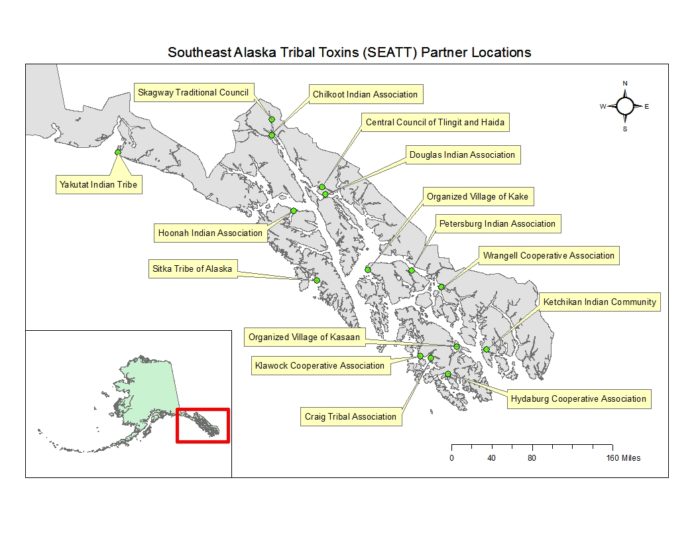 A new lab in Sitka tests regularly for shellfish toxins and is now teaching more than a dozen tribes in the region to do the same. (Map courtesy of the Sitka Tribe of Alaska)

“It’s a huge deal here,” says Ian Johnson. “People are out digging all the time.”

Johnson is the environmental coordinator for the Hoonah Indian Association.

“If I was just to guess, I would say over 50 percent of the community consumed clams, probably more. It might be 70 or 80 percent,” says Johnson.

Three people died in 2010 from paralytic shellfish poisoning, including one from Hoonah, and others have gotten sick since.

That’s why Johnson says people are eager for his weekly results, which he started releasing in October. But he soon ran into a problem.

People have different names for the same clams, like the Pacific Littleneck clams– some people call them steamer clams. Others, Johnson says, just differentiate between edible and inedible clams.

So he published an online survey about shellfish names.

“I was just trying to tap into this local base of knowledge and try to understand what people call these different species of clams so I can communicate the results better with them,” Johnson says.

Johnson released results from the survey online and continues testing the water for toxins each week. If levels are unsafe, Johnson can send in shellfish samples to get blended up and tested in Sitka.

The batch of mussels in the blender right now is from Petersburg, a community 90 miles east of Sitka. They were flown in just this morning.

After three minutes, the mixture is then run through a series of tests to determine if the mussels in Petersburg are safe to harvest.

Shellfish samples are flown in from other tribes almost every week, which helps fisheries biologist Jen Hamblen iron out the kinks in the lab.

Outside of the lab is a different story.

“A problem we encountered today is that there are frozen mussels on the beaches right now,” explains Hamblen. “So, we’ll have to look at how to do sampling in Southeast Alaska when we have cold snaps like the one we’re experiencing now.”

She may not be eating much raw shellfish herself, but Hamblen has an appetite to get it right. Because the one variable that won’t change is the local demand to know whether the fruits of the sea are safe to eat.