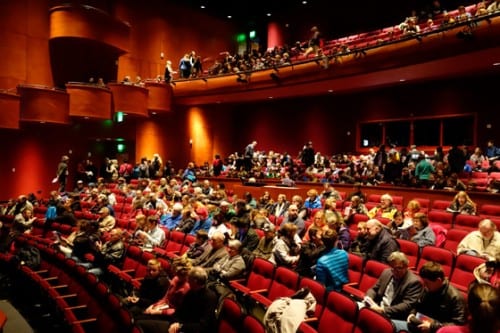 The Friends of the Performing Arts chipped in $12,000 to offset costs of running the PAC, by selling commemorative plaques on armrests. Revenues from the facility, however, barely topped $28,000 since school district concerts are free. (Emily Kwong/KCAW photo)

After a year off, students in the Sitka School District and around the state will resume taking standardized tests this year. The district also received a financial boost from the performing arts this year, as well as an increase in students with special needs.

Superintendent Mary Wegner relayed the news about testing to the school board at its last regular meeting (12-5-16).

“The Alaska Department of Education and Early Development has just selected a new student statewide assessment and that will be implemented this spring for grades 3-10. The company that they selected is Data Recognition Corporation, or DRC.”

DRC was the state’s previous testing vendor for what was known as the SBA — or Standards Based Assessment. The state subsequently changed to a diff erent vendor for testing called the AMP, or Alaska Measures of Progress, in 2015, but technical difficulties forced the Department to cancel the test.

Wegner says the new assessments will have something in common with the AMP, however.

“It will be an online assessment in English Language Arts and Math. In addition there will be a spring assessment in Science for grades 4, 8, and 10. So that’s breaking news, hot off the press.”

FOPA board member Roger Schmidt made the presentation.

“Our goal was to offset operations costs by $10,000. And I have a check tonight for $12,000. The community’s been unbelievable supportive. We started our Take a Seat campaign again after a number of years, and it was just amazing.”

“Take a Seat” refers to FOPA’s efforts to sell plaques on the armrests of the seats in the Performing Arts Center, for up to $500. Although the $12,000 is a relatively small portion of the PAC’s $230,000 annual operating costs, superintendent Mary Wegner told KCAW that “every penny counts.” Wegner said that the FOPA donation had not been allocated yet, but she expected that it would be applied to ongoing equipment needs for the facility, which she noted, is used by the entire community, and not just by the school district.

Revenues for the PAC — including all public performances — were only $28,000 last year.

And finally, Wegner alerted the board that the district fell below its budgeted number of students, during the official school census in October. The Sitka District was down 24 students in all, to 1,276.

Nevertheless, Wegner expressed concern over the loss of students in the district. She reported that the downward trend had continued since the count period in October, with 50-percent of the decline attributable to families leaving town.