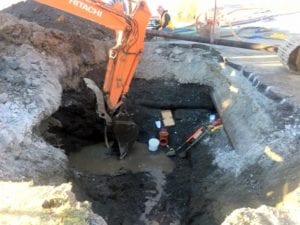 Williams says the break introduced some air into water mains, which has been especially noticeable at higher elevations like Lance Drive. Besides fixing the leak, crews are working to clear the air. (KCAW photo/Robert Woolsey)

A Sitka neighborhood was without water most of the day Sunday (1-8-17) while crews worked to isolate and repair a broken main.

It’s the third water main break in a week in Sitka.

The Sitka water department was still working on the repair Monday morning, in a hole next to Swan Lake roughly 10-feet deep. Two pumps are running full-on: One is keeping the hole drained while crews install a new valve, the other is diverting Wrinkleneck Creek, which flows in a culvert that is now exposed by the hole.

It’s a noisy, muddy mess, but Williams says things are finally under control.

“This started on Saturday night. 10:45 p.m. I got the call. And then we tried to start digging. We isolated this line, but we realized that the ground was frozen way too solid and we didn’t have the proper equipment. So about 2:30 a.m. we bagged it and decided to come back on Sunday and get a breaker out here and some bigger equipment. As we started digging we encountered Wrinkleneck Creek and lake water. So we spent most of Sunday just trying to control the water so we could get down to the pipe. Once we got down to the pipe we realized it was the hydrant leg. A totally broken pipe. A shift in it, with a 3-4 inch gap. So yesterday we were able to get a valve on it and get the water turned back on. And now today we’re putting a new hydrant leg in and a new hydrant, and we’ll be rockin’ and rollin’.”

Although the break was confined to Lake Street — and only that neighborhood lost service — water customers all over Sitka noticed a pressure drop. Williams says it’s to be expected.

“So when the break first let loose it caused a whole system shake-up. And so people at higher elevations — like on Lance Drive — they will lose pressure. That would have been just a quick loss of pressure. The residents here on Lake Street from DeGroff down to Kincaid Street were without water from early Saturday (midnight) to about 6 p.m. Sunday when we got the water turned back on. Luckily we were able to isolate it to just a few residences and businesses.”

Hundreds of ice skaters enjoyed Swan Lake while crews worked on the line Sunday. Williams says the cold weather isn’t to blame for the break — the third in the past week in Sitka (at Shotgun Alley and at the airport). Rather, Williams says the cast iron water main under Lake Street was installed in the 1960s and is nearing the end of its service life. She says the soil in that area is settling, and the city will have to consider a major replacement soon.