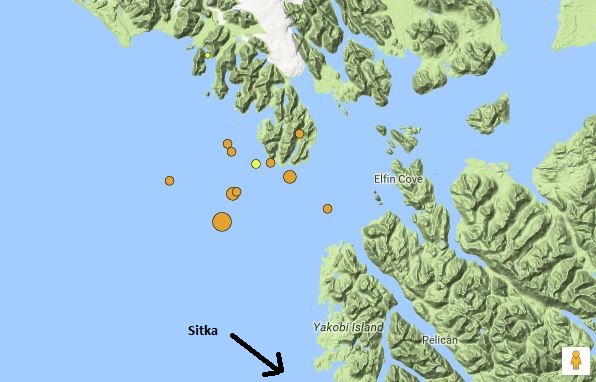 A series of earthquakes shook Southeast Alaska Monday afternoon into Tuesday morning. The epicenter of the quakes was located off the coast of Elfin Cove, 90 miles north of Sitka.

Natalia Ruppert is a seismologist at the Alaska Earthquake Center in Fairbanks. She said the series of quakes began with a magnitude 3.9 just before 12 p.m. Monday.

“This was not the largest from the Monday sequence, actually,” Ruppert said. “[A] magnitude 4.3 occurred about an hour after the 3.9 quake.”

After those initial quakes, Ruppert said, were a series of aftershocks in the same area. She said that’s typical, for one larger quake to be followed by smaller ones.

Another thing that’s typical is the location of the earthquakes.

“In Southeast Alaska there is a well-known fault called the Fairweather-Queen Charlotte Fault that follows the coastline of Southeast Alaska. It’s offshore,” Ruppert explained.

A fault is basically a fracture in the earth’s crust. Ruppert said, in the case of the Fairweather-Queen Charlotte Fault, the two sides are slipping past one another, creating earthquakes.

Monday’s 4.3 quake isn’t anything to be worried about, but Ruppert said the fault has slipped more severely in the past.

“Maybe some people still remember on July 25, 2014 there was a magnitude 6.0 earthquake almost in the same location as the sequence on Monday,” Ruppert said.

According to Ruppert, the Alaska Earthquake Center hasn’t received reports from Elfin Cove or the surrounding communities after Monday’s earthquakes and aftershocks.

Even if you didn’t feel this one, though Ruppert likes to remind people that the fault is on the move.

“People in Southeast Alaska may forget that they live next to a major fault because they don’t feel these earthquakes very frequently, but it definitely should be on the back of their minds that this fault– Queen Charlotte Fault– is very active and it’s capable of producing major earthquakes so they should be aware and prepared,” Ruppert urged.

Monday’s magnitude 4.3 earthquake occurred around noon with ten aftershocks recorded through Tuesday. Ruppert expects those aftershocks to quiet down by Wednesday.