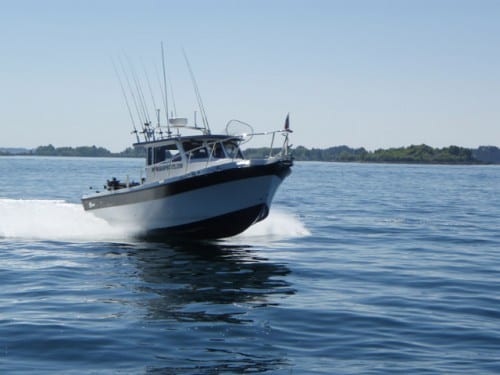 The Sitka Assembly has approved, on first reading, a proposal to raise the sales tax cap to $12,000. The co-sponsors hopes the tax raise will target non-residents, such as tourists and charter fishing customers, making big purchases.

Earlier in the year, the Sitka Assembly pledged to find more money for city government. And on Tuesday night (01-25-17), they considered a proposal to do so by raising Sitka’s sales tax cap.

To raise or not raise the sales tax cap

The Assembly passed the ordinance unanimously on first reading. They’re seeking citizen input between now and their next meeting, on February 14th. If passed on second and final reading, the measure would go into effect on October 1st.

The Assembly discussed how raising the tax cap would affect local merchants, construction companies, and the fishing fleet. Assembly member Steven Eisenbeisz worried about commercial and charter fisherman in particular. “My big concern with this is fuel purchases in town. Not only for our commercial fisherman, who – while I don’t know if they spend $12,000 at a time – easily spend over $3000 at a time on fuel,” he said.

Should the sales tax cap raise to $12,000, the city estimates it would generate $1 million and $1.5 million in new revenue per year. Citing the city’s budgetary needs, Potrzuski defended the proposal.  “This is one of the least egregious ways of getting revenue for the community. And I think it hits the people that can most afford to do it,” he said.

At their visioning session, the Assembly committed to finding $650,000 in new revenue this year. On the phone with KCAW after the meeting, Potrzuski said the Assembly also has a proposal in the pipeline to repeal the senior sales tax exemption on a needs basis. If the sales tax cap does pass, however, Potrzuski said it’s possible the added revenue will eliminate the need for further taxation in Sitka.

Assembly member Aaron Bean made a motion to eliminate the sales tax cap entirely, which has the potential to generate $2.2 million in revenue. That motion failed for lack of a second. Potrzuski stated earlier in the meeting that a tax cap was necessary so as not to hurt housing development.

Tuesday night (01-24-17), the Assembly also held a work session to talk about ongoing debt issues with the Blue Lake Dam.

Electricity use has flatlined in Sitka. Jay Sweeney, Chief Finance and Administrative Officer, said it’s likely the city will be short what it needs to make the bond payment this year. The payment is due on June 30th.

Depending on usage, Sweeney says it’s tough to say at this time how much more money the city will need.”We’ve got a bullet of $589,000. That’s kind of a middle of the road estimate. The range that I think it could be anywhere as low as $270,000 additional to $1.3 additional necessary to make that minimum rate covenant,” he said.

The Assembly does have a few options to address this. They could raise electric rates by 15%, from 14 cents to 16 cents a kilowatt hour. They could use funds from elsewhere. Or they could defease on the bond.

Defeasement of a bond is a process whereby the borrower (City of Sitka) voids the bond, by setting aside money to pay it back at a future date. The bond would, on paper, go away. Consequently, the city wouldn’t have to generate as much revenue. This would result in lower electric rates for customers, but less money for critical repairs.

Sitka’s electric infrastructure is old and failing, causing three short outages in the past month alone. Utility Director Bryan Bertacchi worries that with less working capital, Sitka could face even longer outages in the future. “I was in Marine Street at that outage on Wednesday night last week, at 1 a.m. in the morning. We smelled smoke in there. That whole giant switchgear line-up – there are these big breakers to feed 80% of all of our customers – if that burns up we’re going to be black for four months before we can fix it. The whole town. And I just hope it doesn’t happen in the summer. So these are the risk issues that are real, that we have to address,” Bertacchi said.

Bertacchi and Sweeney reviewed two other options to restructure the electric fund’s debt:

Given that this was a work session, the Assembly took no action on these issues.

The city of Sitka will apply for $5 million dollars in state loans for repair water and sewer infrastructure.

Sitka qualifies for these loans (Res 2017-01 Memo and Resolution) through the Alaska Department of Environmental Conservation Municipal Grants and Loans Programs. The Sitka Assembly authorized pursuing the loans – on first and final reading – during their meeting Tuesday night (01-24-17). In addition to the loans, city staff are also recommending a rate increase of $1.81 for water and $2.41 for wastewater per month to stabilize the water and wastewater funds. 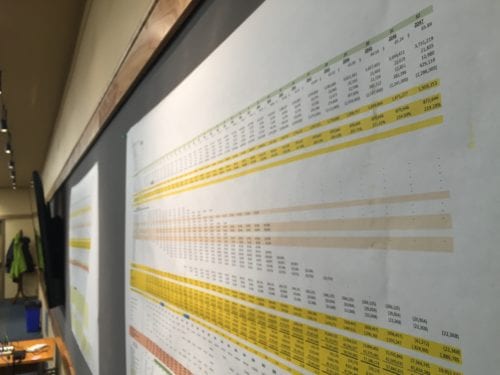 The city finance department hung two worksheets on the walls of the Sitka Assembly chamber, mapping out cash flow for the water and wastewater funds from 2013 to 2047. The department is working with Public Works to plan for major infrastructure repairs over the next several decades. (Emily Kwong/KCAW photo)

Following their long-range water and wastewater capital plans, the Public Works Department wants the loans to finance the replacement of water and sewer lines on Lake and Monastery Streets, equipment at the Brady and Thomsen Lift Stations, and building repairs to the Wastewater Treatment plant building. If awarded, the loans would be paid back at a 1.5% interest rate.

Assembly members Steven Eisenbeisz did not support increasing the Sitka’s debt load with loans, preferring to wait until the city has saved up enough capital of its own to make the repairs. “It does stretch out the time frame until some of these repairs are made, but we do save a whole lot in interest on the backside,” he said.

Assembly member Bob Potrzuski felt that self-financing the repairs may cost Sitka in the long term. This winter, there’s been four water line breaks in Sitka. Each emergency repair is like an expensive band aid, costing tens of thousands of dollars. Addressing Eisenbeisz, Potrzuski argued that, much like Sitka’s electrical infrastructure, the decades-old water lines needed to be replaced sooner rather than later.

“I mean, we can’t have the lights go out out for four months. When citizens flush their toilets, they want it to go away. When they turn on the tap, they want water to come out of it,” Potrzuski said. He added that past Assemblies didn’t set aside enough working capital to make these repairs independently. “Although I appreciate your long term view [Steven], I wish you had been on the Assembly in 1987. And then we perhaps we’d be a lot wiser,” he said.

The Assembly voted 5-2 on the loan application, with Assembly member Aaron Bean and Eisenbeisz voting against.

Sitka Police Chief Gets Own Vehicle

The Assembly also approved purchasing a used vehicle for Police Chief Jeff Ankerfelt for $17,000. The money is coming from the $25,000 sale of a fire truck to the Haines Fire Department.

Eisenbeisz questioned the necessity of a vehicle, given that the former police chief, Sheldon Schmitt, drove his own. Speaking from his law enforcement background, Bean supported giving the chief a marked car. “Part of being in the car, whether you’re in an administrative role or not, sets a presence in the community that in and of itself diverts from illegal activity.” Right now, Ankerfelt drives a white Toyota.