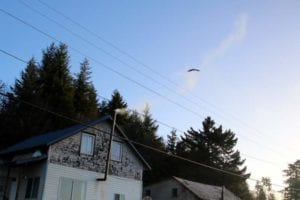 Students in Kake have been writing personal essays for Raven Radio. This writer wanted to show how he slowly inhabited the life of a criminal, when faced with tough family circumstances. (Emily Kwong/KCAW photo)

The following personal essay was written by a student in Kake, as part of a special project between the Kake City School media class and Raven Radio.

Due to the sensitive nature of the material, this student has chosen to remain anonymous. Prior to moving to Alaska, his family lost everything in a house fire. They became homeless and they moved to Anchorage when the writer was seven-years-old. For the next two years, he lived in and out of homeless shelters. And shortly after they moved into a stable home, he began stealing.

I’m a student at Kake City Schools. I love science, math, and chess. And this is the story of me growing up.

When I was young, I was obsessed with materialistic things. Mainly because growing up, I never had crap. By the age of 10, I was walking into grocery stores and taking anything I desired for the price of nothing. At first, it was for food. My family was poor and sometimes we didn’t have food in the cupboards. So, I went out and got my own food to feed myself and family.

But even when we became stable again, the stealing didn’t go away. My habits became worse.

Every time I walked into a store, I felt like I had to steal something or else it was a missed opportunity. It didn’t really matter who I was with. I would do it with my mom around, my father, brothers…it didn’t matter. My subtle habits became my addiction and the pathway through my life darkened.

Listen to this student’s essay, in his own words:

I began stealing from friends and family. I would steal money, drugs, anything I could profit from. Stealing was the easiest thing that I’ve done.

I was never caught until I was 13. By then, I was following people, watching them type in the PIN to their debit card. Soon after, I would pickpocket their wallet or steal their handbag out of their purse and go take out their limit from the ATM. I was never caught for doing that though. But what I did get caught doing was stealing food from cars. I tried to walk out and someone came and stopped me. This was the first time that I had been caught and luckily it was for only something trivial.

When I was a freshman, I was stealing hundreds of dollars of clothes at the mall every weekend. I made money by stealing designer clothes, cologne, and accessories and selling them for a fraction of the price. I was just a young kid, born into a poor family, and I thought the only way out was to do it on my own. This was the only thing I knew how to do.

My first encounter with the police is when I was stealing from a Sephora at a JC Penny Mall. I already had merchandise from several other stores in my bag when I was caught. I was walking out when three women walked out with me and grabbed me by the arms. I didn’t know what the hell was going on. They told me not to struggle because I was flipping out for a moment.

After I realized what this was, I complied with them and walked with them, until we got downstairs. I felt like I could break free from their grip and so I tried to break free. They just held me while I was struggling. After a while, a big dude ran up and tackled me to the floor and then got me in handcuffs me. Since I tried to run, they could’ve technically charged me with strong arm robbery. But I was only 14 so they decided not to. Instead, I was assigned a parole officer and this was our first encounter.

After a while, I just went back to stealing. But instead of it being from stores, I stole from people. I would wait in the locker rooms during gym, at school, carefully scanning someone with valuables on them. Then, I would do one of three things: I would figure out their pin, or pick their lock, or just hope the leave their stuff unlocked. I’ve gotten thousands of dollars of items from doing this my freshman year. I stole everything from iPhones and “Beats by Dre” headphones to True Religion pants to Gucci belts. I also stole from my band room while our band class was playing for a football game. On one occasion, I stole four phones and $700 in cash.

My sophomore year came around and that’s when I wanted to step it up. I wanted to start doing organized crime. I plotted robbing a store that I thought had a perfect location. But then I later found out it was my friend’s aunt’s store.

Before I was able to go rob a store, I decided to go rob someone who was messing with my girlfriend. I told her to instruct him to go to the park near her house, but instead of her showing up, I would. I went with two friends, one just recorded while the other helped me kick his ass. I didn’t fight him as much as I expected because I expended all my time during the 90-second robbery just trying to get his phone. That was our main target because it had information that we didn’t want to leak.

Once we got near the park, we had our bandanas on and our hoodies up and we were ready to roll. We were across the field of the park when we saw him sit down under a canopy. I didn’t hesitate to start walking towards him. As I got closer, my stomach got a little nervous, but I didn’t really care at this point. He noticed us walking towards him as we got near him. His eyes hesitated for a second and he asked us, “What’s up?” I walked up to him and said, “What’s up?” and then immediately decked him in the face.

He was shocked and he began to try to defend himself. He shoved me back like he was trying to wrestle me. I grabbed onto his phone. We were wrestling around. He began to scream bloody murder for help. All the while, my friend was putting work on his body and face. He told us not to take his phone and that he had money instead. We didn’t respond nor take the money. After another 20 seconds of wrestling him, I finally got ahold of his phone.

I was completely and utterly exhausted. At that moment, I was reminded how out of shape I was. We got up and I saw his “Beats by Dre” headphones, so I grabbed them also. We barely got away. We hid in the woods and worked our way through a neighborhood, with the police and neighbors looking for us. An hour later, our driver finally came and we made it out safe.

But one month later, my past finally caught up to me. I was arrested in school and this was the beginning of my epiphany.

Some people come out of jail and come out not learning a single thing. But every day I was there felt like a day in my life, wasted with some people who were not like me. I definitely saw a difference between them and myself. That was my epiphany.

Juvenile facilities were easy compared to jail or prison, and juvy was complete hell for me in so many different ways. I learned a lot from that day. I haven’t stolen anything from anyone since the day I was admitted to the juvenile center. I decided that I had to make a change. I was ready for a new life.

This student’s media teacher is Jordana Grant in Kake. With production help from Emily Kwong.