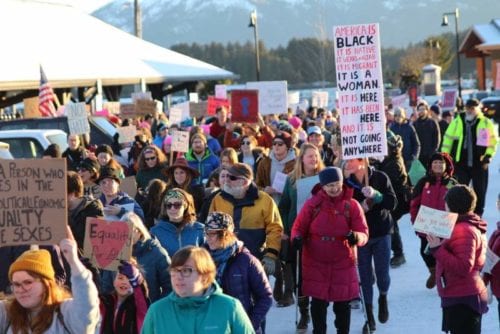 The organizers of Sitka’s march on Saturday (01-21-17) were expecting 200 people to show up. The crowd was well over 700, in solidarity with the Women’s March on Washington. (Emily Kwong/KCAW photo)

Over the weekend, the Women’s March brought half a million participants to Washington, DC to protest President Donald Trump. The event inspired marches around the world and across Alaska, one in Sitka. And even before the march was over, participants were wondering what would happen after the dust settled. KCAW’s Emily Kwong spoke with those trying to turn the energy of the moment into direct action for the future.

This past Saturday, over 700 Sitkans participated in a locally-organized march in solidarity with the Women’s March on Washington. That’s nearly 10% of the wintertime population. The last time Sitka had a protest this big was during the Iraq War in 2003. 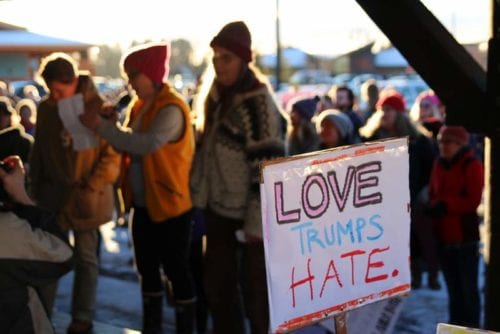 Under blue skies, marchers assembled at Crescent Harbor, where co-organizer Kathy Ingallinera made an opening statement. “I’m not surprised, but amazed at the number of people here, so appreciate everyone coming out,” Ingallinera said.

Reverend Julie Platson called for a moment of silence, followed by a blessing from Jan Richardson.

So may we know the hope, that is not just for some day, but for this day.
Here, now, in this moment, that is open to us.
Hope not made of wishes, but of substance.
Hope made of sinew and muscle and bone.
Hope that has breath and a beating heart.
Hope that will not keep quiet and be polite.

Phil Burdick let out a rallying cry: “Let’s roll people!” The Sitka marchers filed into the snowy streets. They held their signs high, many advocating for women’s and reproductive rights, environmental protection, and grassroots action.

While the march began quietly, the crowd seemed to build courage as they walked. They started to chant. This attracted passerby, one who said, sipping a coffee while watching from the sidewalk, “Thank God for President Trump.”

The spectator, who introduced himself as John, said, “I think [Trump] is going to try and cross over the aisles and be a little less partisan. I think he’s going to try and do that, because we have to unify as a country.”

Sitka is divided too. Sitka’s Republicans favored Trump as the party nominee, while Sitka Democrats fanned out for Bernie Sanders. During the election, the vote for president was nearly even – with 1,258 for Hillary Clinton and 1,144 for Donald Trump. And prior to the March, a Facebook feud carried on for days over whether the march did more to divide the town than unite.

John also said the media hasn’t been fair in their portrayal of Trump. “It’s just propaganda, a lot of propaganda.” He takes exception, however, with Trump’s comments about assaulting women in a 2005 Access Hollywood tape. “I will say as a Christian I think that was appalling, horribly, and disrespectful in every way. But the guy apologized. He felt like that was a horrible thing to say. ‘I shouldn’t have said that.’ People have a change of heart,” John said. His message? Give Trump a chance. 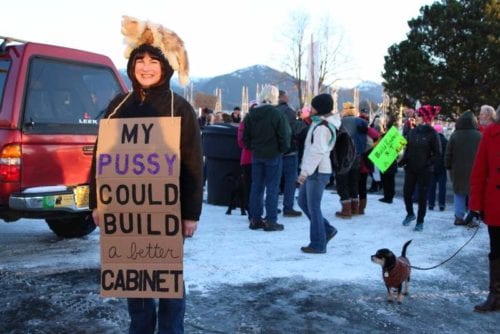 The crowd, though, wasn’t having it. Several donned pink, cat-eared hats, “pussy hats,” a sly reference to Trump’s remarks. Several of the marchers were young women and girls. Iona Burdick, Phil’s daughter, had scribbled her sign in marker. It said, “Women’s Rights is Right.”

Sarah Ferrency, Iona’s mom, chose for her sign a quote from Holocaust survivor and author Elie Wiesel. “There may be times when we are powerless to prevent injustice, but there must never be a time when we fail to protest.” 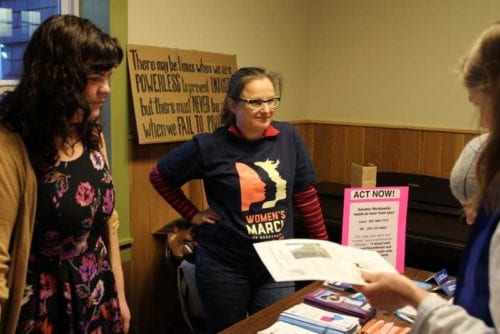 Sarah Ferrency distributes an action list for supporters of Planned Parenthood after the march. “A march feels really good, but this can’t be it. If this is it, the movement dies,”she said. (Emily Kwong/KCAW photo)

The march is over. The signs are down. We’re gathered at St. Peter’s See House, where, amid trays of cookies, a dozen nonprofits are staffing tables. They’re trying to divert the energy of the marchers into continued action.

Ferrency is at the Planned Parenthood table. The clinic closed down two years ago, but she wants locals to know that its services are a few taps away. Planned Parenthood of the Great Northwest and the Hawaiian Islands now has an app. “You can actually video conference with a clinician over the phone and get birth control and at home STI kits in the mail,” Ferrency said.

Ferrency was happy the turnout for Sitka’s march, but noted that the crowd was mostly white. Few persons of color were in attendance. “There’s a lot of white people here. There is not a lot of our minority community here. That saddens me. I think that’s an area where we need to work and develop the relationships with people not of our own class and our own culture and our own race. That’s where you really start to make a difference,” she said.

About a third of Sitka’s tables were dedicated to the environment and subsistence rights. The Sitka Global Warming Group was there, Chichagof Conservation Council, Alaska Native Sisterhood, as wells as the Sitka Conservation Society. 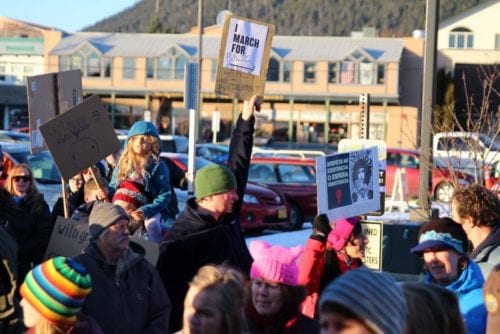 Director Andrew Thoms said their primary concern under the Trump administration is losing access to public lands. For him, the direct action fair was all about gathering signatures. “Commercial fisherman are going back to Washington to advocate for federal lands and our salmon and fisheries resources. We’re going to send them back with a list of people who support keeping Tongass National Forest lands intact,” Thoms said.

As I bobbed from table to table, everyone talked about momentum: how to turn one-time protesters into full-time political activists. 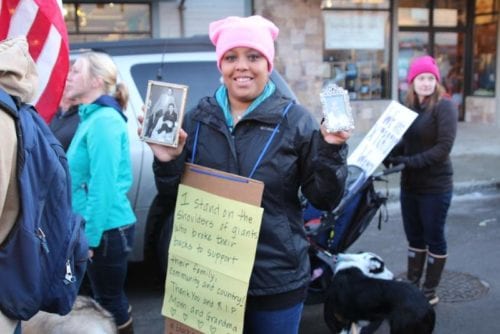 Melissa Harrison carried two framed pictures, one of her mother and one of her grandmother. She marched in their honor, her sign saying, “I stand on the shoulders of giants.” (Emily Kwong/KCAW photo)

Cathy Lieser said the march really lifted her spirits. “It was like a big giant hug. The energy was that everyone showed up to be in community. It was sweet,” she said. Lieser was genuinely surprised that the debate over public lands had re-emerged, saying, “It feels like we’re going backwards.”

“Democracy is a muscle and you have to use it. And you hear that a lot,” Lieser added. “But when you think about it, that is what democracy is about. It’s a living contract that everybody has with each other that are living in the United States of America. So, are we going to show up to play our part?”

That’s the difference between a march and a movement. A march is a political burst in time, something attention-getting. Pictures of Sitka’s march circulated on the New York Times’s and on Huffington Post’s websites. But now that the moment has passed and the Trump administration is carrying out their agenda, the question for those who oppose it is how to transform their words on their signs into something real on the ground. 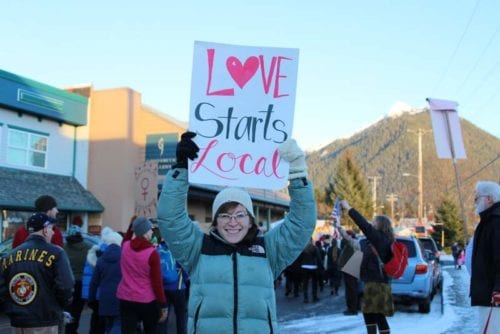 Kitty Sopow’s biggest wish is for everyone in Sitka to be kinder to each other. “Maybe treat everyone like it’s their birthday, you know? That’s a good place to start.”