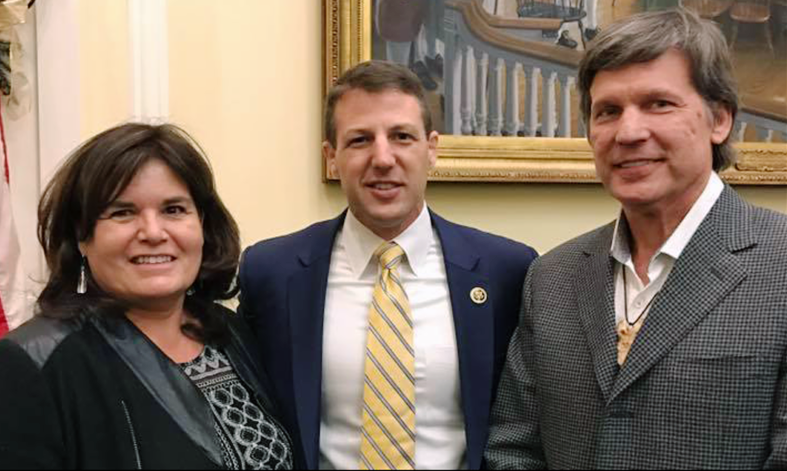 Thousands have protested the line, saying a portion of it could poison the Standing Rock Sioux’s water supply. They also see the move as an affront to tribal sovereignty.

But before Trump’s inauguration, his transition team met with Native leaders to ask what they wanted out of the new administration.

The meetings were billed as listening sessions with Trump’s Native American Coalition and included members of the president’s transition team.

The coalition, formed just before November’s election, is chaired by Republican U.S. Rep. Markwayne Mullin, a member of the Cherokee Nation of Oklahoma.

Jacqueline Pata of the Juneau-based Central Council of Tlingit and Haida Indian Tribes of Alaska was among those at the western meeting. She’s executive director of the National Congress of American Indians and a board member of Sealaska, Southeast’s regional Native corporation.

“There are things in this administration’s agenda that we can find common ground on, like infrastructure development, like improving the economies of our communities,” she said. “But tribal leaders made it really clear tribes are governments and should be treated as such and respected as such.”

“Tribal leaders said things like, ‘We’re not opposed to development. But we want to be able to make sure that we have a meaningful place and that our consent is part of the process of evaluating the permits that may affect our lands,'” she said.

Some leaders went into the mid-December meetings angered by reports that the coalition’s chairman wanted to take tribal lands out of tribal hands.

Tlingit-Haida Central Council’s Will Micklin, who also attended the meeting, said those reports were refuted.

“He assured me he had no intention of privatizing tribal lands,” he said. “It was a misinterpretation of his desire to make productive the tribal estate, which are tribal lands.”

Micklin said an overriding issue was the future of Obamacare.

“We’re concerned that the repeal of the affordable health care act not also repeal the Indian Health Care (Improvement) Act and not reduce funding for it from our other funding sources,” he said.

Another issue to watch was land into trust, which allows tribal governments to transfer title to the federal government and protects the land from taxation or seizure. Mark Trahant is a former University of Alaska journalism professor and a blogger on Native issues. He’s a member of the Shoshone-Bannock Tribe now teaching at the University of North Dakota.

“That was kind of evolving late in the Obama administration. And now, (if) organizations and tribes want to follow through they’re going to need some sort of mechanical side to make the process work. And whether or not resources are put into that by the administration, I think will be interesting to see,” he said.

Changes in the state’s far north are also being watched by some Alaska Native leaders.

Trahant worries the new administration doesn’t know much about it, beyond the potential for oil and gas production.

That’s especially since Trump and members of his administration question the human role in climate change.

“Even thinking about the United States as an arctic nation and a changing arctic nation and what does that mean and what are the policy implications,” Trahant said. “The Obama administration had pushed very hard on the environmental side of that. But now you may see things like more interest in shipping lanes and resource extraction and that sort of arctic issues.”

He said the Montana congressman understands tribal sovereignty and other key issues.

“The person who’s been nominated for Interior secretary is an avid fisherman,” Trahant said. “He understands the language of that and recognizes the importance of a healthy fishery, both as a food source and subsistence.”

Trump takes over from an administration that expanded relations with tribal governments and other Native groups.

Each department had a Native liaison who reached out and addressed concerns.

Tlingit-Haida Central Council’s Pata is among those hoping that continues in some form. But they say Obama will be a hard act to follow.

While most attended the Trump team’s Native coalition meetings were encouraged by the interest, they know many of their concerns don’t mesh with the new administration’s goals.

That’s certainly the case with the Dakota pipeline.