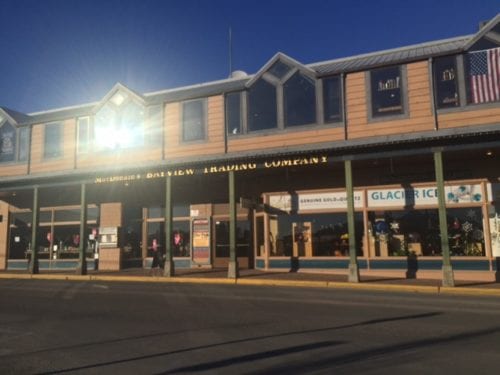 A Sitka restaurant was broken into early Sunday morning, the latest in a string of burglaries affecting local businesses.

Sitka’s Bayview Pub was broken into before the sun rose on Sunday (02-05-17). Owner Tony Buak said it began at 5:45 a.m. “The perp broke in through the Lincoln Street front doors of the Bayview Trading Building. Snapped the lock right off of the door,” Buak said.

Buak bought the Bayview Pub with his wife, Patricia, in 2015. He got a call that the restaurant and sports bar had been broken into around 6:30 a.m. “My morning kitchen crew guys came in and said, ‘Hey boss man, you’ve been broken into and they definitely got into the big safe.’ So unfortunately for me – I had closed the safe and put the latch down but it’s one of these combo safes – I forgot to turn the wheel and it did not lock. So he had free access to get to the safes,” Buak said.

Buak is still tallying his losses, but estimates that $1,400 in cash was taken between the big safe and a smaller one. Also missing is a bottle of alcohol. Buak called the police at 7:15 a.m. and within minutes, three officers and a detective arrived.

“It’s been an unnerving 24 hours. You just feel violated. It’s one of those things. Three o’clock this morning I woke up and came down to the public to triple check all doors and make sure everything was okay,” Buak said.

The McDonald’s Bayview Trading Company is home not only to The Pub, but also the Goldsmith Gallery, the Alaska Pure Sea Salt Company, and other shops. Buak is working with the building’s owner to repair the front doors and install more locks. He said, “Here we are in little Sitka and these things, I guess, do happen. And I have my Uruguayan wife saying, ‘Told you! This is why we need to lock our doors at night!'”

This is the fourth break-in to a local business in the past two weeks. Buak said his heart goes out to those other business that have been affected. “It’s a horrible thing for us all to go through. But we somehow pulled together a Super Bowl Sunday here yesterday and I had a good time and thanked Sitka for the continued support that they’re giving us here.”

The Sitka Police Department says the investigation into this and other burglaries is ongoing. Speaking with KCAW on Friday, Sitka Police Chief Jeff Ankerfelt advised businesses to install good lighting, alarms, and video recording – with a visible camera – and to take any cash home.

To report information about this and any other crimes, call the Sitka Police Department at 747-3245 or use their anonymous crime line at 747-8980.