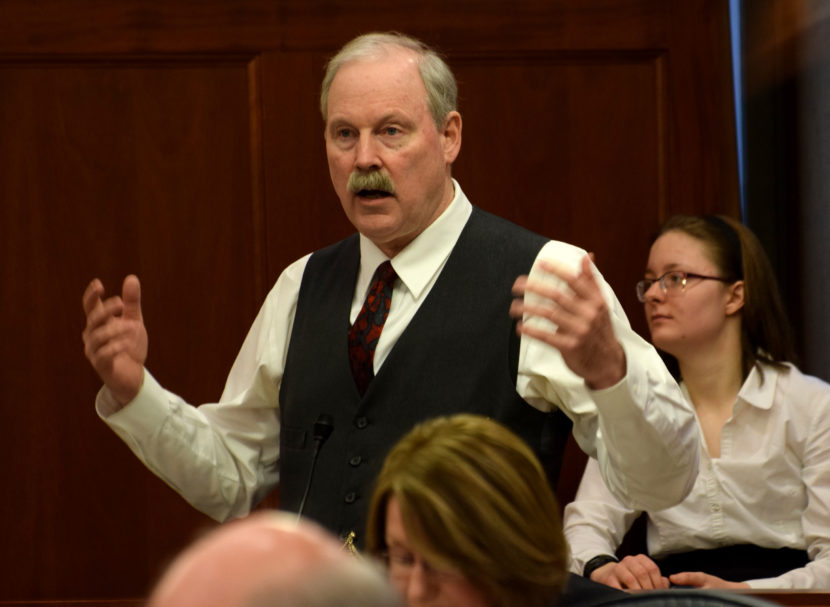 Sen. Bert Stedman, R-Sitka, speaks on the Senate floor in 2015. He has proposed a bill to draw money from the Permanent Fund. (Photo by Skip Gray/360 North)

The amount residents receive in Permanent Fund dividends would be the same as the amount available for the state budget, under a new proposal.

It’s one of two Permanent Fund plans lawmakers are considering, although more may be on the way.

Using Permanent Fund earnings for anything but dividends was long considered untouchable in Alaska politics. But this legislative session, all but a few lawmakers are talking about different ways to use fund earnings to pay for part of the state budget.

The latest proposal is Senate Bill 21, sponsored by Sen. Bert Stedman. The Sitka Republican wants to draw 4.5 percent from the $55 billion fund each year. At least half of the draw would go to dividends. And Stedman said the rest of the draw could be spent on the budget.

“We’re all in it together – Republicans, Democrats, independents, urban, rural – it doesn’t matter,” Stedman said. “We’re all in the same ship – and the ship’s sinking, financially. And it’s sinking pretty fast.”

In the first year, Stedman’s bill would bring in $1.1 billion to the state budget. That’s about $700 million less than Gov. Bill Walker’s Permanent Fund bill. Stedman’s bill would provide for larger PFDs – about $1,700 compared with $1,000 under Walker’s proposal. The governor’s bill is based on legislation the Senate passed, but failed in the House last year. Walker ended up vetoing half of 2016’s payout.

Stedman said his goal is to protect the Permanent Fund into the future.

“I don’t want to see us have huge appropriations that are unsustainable into the earnings reserve of the Permanent Fund,” Stedman said. “And the only way to do that is to block the legislative ability of the good-intended Legislature.”

The senator kept the bill simple, drawing on the current Permanent Fund law. He said other ideas that would put the state’s budget into long-term balance could be added as amendments to the measure.

Stedman has brought the idea to members of Walker’s administration. Revenue Commissioner Randall Hoffbeck said devoting more money to the budget – and drawing more from Permanent Fund earnings – will make it easier to close the $2.7 billion gap between state spending and the amount the state raises in oil royalties, taxes and fees.

Stedman said the state could phase in elements of his bill over time. But he said it’s important that it doesn’t draw so much from Permanent Fund earnings that it would affect the fund’s health. And he said that if dividends are much lower, then voters may not accept the changes.