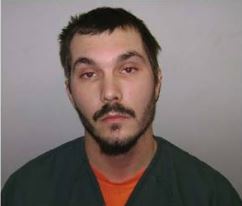 Derek Daly allegedly broke into the Bayview Pub this weekend, while out on bail for burglarizing the Seafood Producers Cooperative. (SPD Photo)

The Sitka Police Department caught the individual who they suspect broke into the Sitka Bayview Pub.

Daly was indicted last month by a Sitka Grand Jury for burglary and theft felonies, after he allegedly stole over $4000 from the Seafood Producers Cooperative. Daly was out on bail, when he broke into the Bayview Trading Company building Sunday (02-05-17) morning.

According to the owner, Tony Buak, the thief snapped the locks off the front door and office door using a crowbar and took approximately $1,400 in cash, along with one bottle of alcohol. He was captured on five of the Pub’s 38 infrared cameras and identified from the footage. Daly is a former employee, who worked in the Pub’s kitchen for less than two weeks.

Lieutenant Walter Smith says the Sitka Police Department is still investigating four unsolved break-ins from this winter – affecting the Sitka Sentinel, Sitka Trail Works, Northern Credit Services, and the Sitka Sound Science Center. He adds that there is no link between those incidents and the break-in at the Bayview Pub.