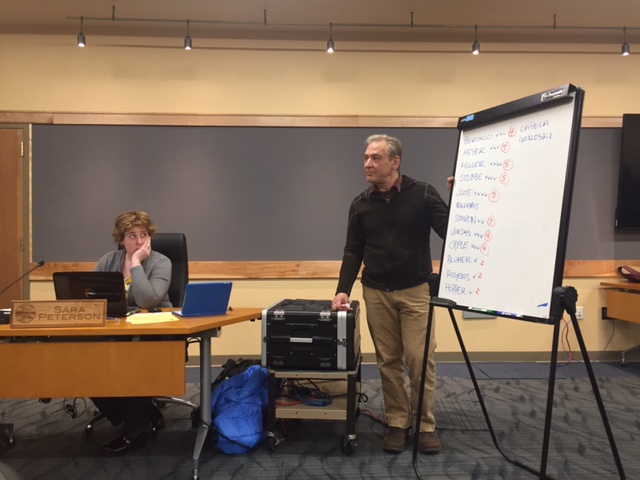 The Sitka Assembly narrowed the candidate list for city administrator from 16 to 8. Two of the candidates are current city employees and while half live out of state, nearly all have ties to Alaska. All are men.

At a special meeting last night  (02-20-17), the Sitka Assembly winnowed their list of sixteen applicants. Those with two votes or fewer were eliminated.

The city’s Fire Chief Dave Miller and Utility Director Bryan Bertacchi  made the cut, with five and four votes respectively.

Miller joined the Sitka Fire Department as a volunteer nearly 30 years ago, and rose through the ranks. He’s been the Chief since 2009 and in his cover letter, writes, “I have dedicated my life to serving Sitkans in their time of need.”

Bertacchi worked for over two decades in the private electric industry, before joining the public sector as Sitka’s Utility Director in 2015. In his cover letter, Bertacchi proposes doing both roles for two years, and then returning full-time to the post of Utility Director.

Out of state, there are five candidates and all have management experience in Alaska.

Mike Scott was a municipal manager in Alaska for 13 years, in Anchorage, the Mat-Su Borough, and Kotzebue. Now based in Washington, he runs a health and social services organization for tribes in Northwest Alaska.

Tony Stobbe is the Director of Public Works in Mariposa County, California, with a decade of Coast Guard experience. He was the commanding officer for two cutters in Alaska. Both Stobbe and Scott received five votes from the Sitka Assembly.

Patrick Jordan and Kevin Opple received four votes each. Jordan is a county administrator in Michigan and former assistant manager for the City of Unalaska and the Bristol Bay Borough. Kevin Opple is recently retired from the Navy, serving recently as the City Manager for the Naval Station in Everett, Washington. He has not worked in Alaska before, but did apply for the top job in the Haines Borough last year.

Harry Staven earned three votes. He is a former City Administrator for Hoonah and mostly recently served as the Finance Director in Bend, Oregon.

The Assembly then directed Mark Danielson, the city’s Human Resources Director, to seek writing samples from the candidates by March 3rd.

The candidates are tasked with answering two questions:

The Sitka Assembly will review those writing samples – two pages per question – and trim their list on March 7th at 6 p.m. They’ll offer Skype interviews to the semi-finalists next month. Sitka’s current city administrator, Mark Gorman, is stepping down in June.

Note 4-16-19: A previous version of this story incorrectly referred to Patrick Jordan as the former city manager of Unalaska. In fact, he was the assistant city manager.